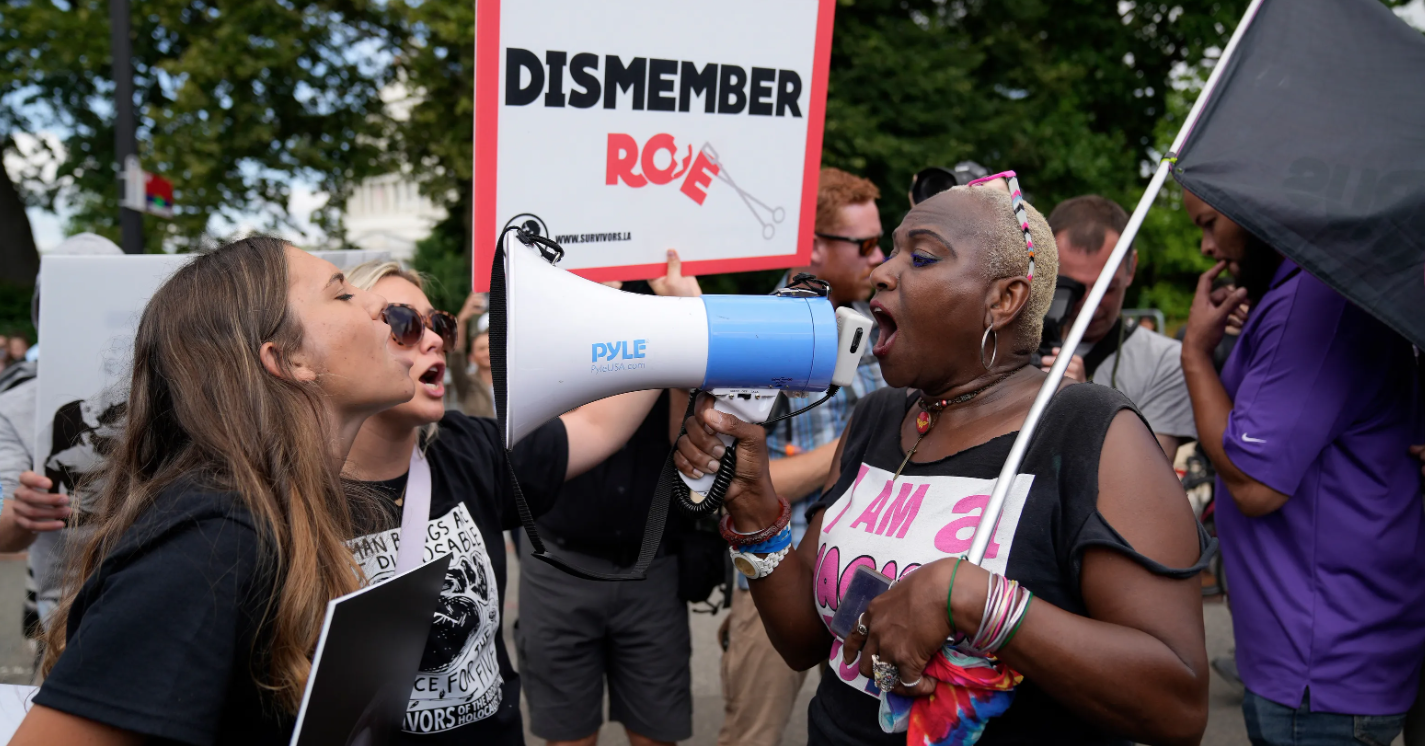 On August 24, 2020, Trump advisor Kimberly Guilfoyle at the Republican National Convention screamed an unhinged, “The best is yet to come!” in a grotesque Marvel villain moment. For her camp of neo-fascist white supremacists, “the best” is only beginning with the overturn of Roe v. Wade and the effective end of reproductive rights in the United States.

Overturning Roe v. Wade is an open war on the bodily autonomy of anyone who can get pregnant. It’s also a stealth form of genocide. These white supremacists well know that Black, Brown, and Indigenous women have exponentially higher mortality rates when it comes to pregnancy and birth. They well know the economic disparities faced by Black, Brown, and Indigenous women and their communities. They know that forced birth for communities of color only increases economic, social, and wage gaps.

More importantly, the potential death tolls for women of color are part and parcel of conservatives’ actual point. Homicide is the leading cause of death of pregnant people. They want us dead. To white supremacists (and their supporters on the Supreme Court), mass deaths of communities of color are the only way whites can regain their numerical majority, along with forcing white women to give birth no matter how the fetus was conceived. Think about why these abortion bans also include cases of rape and incest. This is the one aspect that has nothing to do with killing Black, Brown, and Indigenous women. This addition is for all the white people who can get pregnant to compel them to carry their white babies to term, as the so-called “birth dearth” indicates a steady decrease in the white American population.

The Handmaid’s Tale was already the reality for Black women under slavery. That is the world white supremacists want a return to, but now white women are included in their monstrous equation.

However, as accused sex offender Clarence Thomas notes in his concurring opinion: reproductive rights aren’t the only ones on the chopping block. Thomas suggests the Supreme Court should also review rights to contraception, same-sex relationships, and gay marriage. This in the same week when the court watered down Miranda Rights as well as extended gun rights to open carry without reason needed.

The gutting of Roe v. Wade comes in the wake of the criminalization of transgender people (and anyone who has helped them transition, like their parents) and the start of banning trans folks from social activities like sports. White supremacist groups have been targeting drag queens thanks to conservative rhetoric that they are “groomers.” As it has been said, at this point in the States, guns have more rights than people who can get pregnant.

It’s only the beginning: Senator John Cornyn actually tweeted in response to President Obama’s statement lamenting overturning Roe v. Wade: “Now do Plessy v. Ferguson/Brown v. Board of Education,” an open call for re-segregating America. During a Trump klan meeting — I mean, “political rally” — Congresswoman Mary Miller called the SCOTUS decision a “victory for white life.” The hoods are fully off. We can expect many more openly white supremacist statements in the days and weeks to come as they relish their victory over human rights.

There are many reasons why and how we have reached this point, a point that conservatives have been gunning towards for decades. And I hate to break it to a lot of y’all, but your girl Ruth Badger Ginsburg is one of the reasons why. She had an opportunity to retire during Obama’s long tenure and decided of her own volition not to. If she had gracefully stepped down and Obama had one more SCOTUS appointment, the court would possibly be deadlocked and guess who breaks that deadlock? The vice president. We shouldn’t have our human rights as Americans hinge on a nine-person, unelected, lifetime appointment body to begin with. But since we do, RBG’s decision to maintain her limelight has indirectly resulted in our loss of rights today.

Unfortunately, we’ve gone past the point of no return. Simply voting is not going to solve any of this. People turned out in droves to vote Democrat and oust the former president in the hopes that we would see concrete change and accountability for the previous administration’s multiple levels of crimes, thievery, and unprecedented corruption. But what did we get? Nothing.

Trump and the majority of his cronies continue to walk free without facing any concrete repercussions, as the lethal results of people he installed into power now have very real consequences for all the rest of us. Democrats’ spinelessness in the face of encroaching fascism is to blame, along with the Republicans who did exactly what they have been telling us they planned to do. Democratic politicians have not learned that bipartisanship is not the solution, nor is it even possible at this moment.

The fires of fascism needed to be extinguished at first appearance by judicial means, not wished away with thoughts, prayers, and hopes conservatives will one day do the right thing. Democrats still don’t understand that all of this is actually the right thing for Trumpublicans. You can’t shame people who have no empathy for anyone who doesn’t believe what they believe or have white skin and heterosexuality. How did all of us know this, but the Democrats in power still haven’t figured it out?

It feels impossible to maintain any faith in a system that has failed us spectacularly and under Democratic watch. Voting does absolutely nothing when the people we have elected exercise none of their political will to effect change and safeguard rights on our behalf.

By chance, I watched Sandra Oh’s horror movie Umma on the day Roe v. Wade was Thanos-snapped, and the already disturbing film takes on a terrifying new resonance in our fresh rights-less context. Umma is about an unwanted child and the mother who takes all her anger and resentment out on her daughter in horrifying displays of physical and psychological violence. The film shows how this particular kind of violence creates generational trauma that is extremely hard to break, as we watch Oh’s character inadvertently become the mother she fought to escape.

Overturning Roe will have this same effect, but exponentially worse: an entire generation of unwanted children and the miserable people forced to raise them. Children shouldn’t come into the world like this. Parenthood should be chosen, not inflicted.

I wish I could at least leave you with some actionable items you can do in support of the upcoming tragedies, but whatever I say might be a criminal offense depending on where you live. And that’s a sentence I never imagined writing in America, the so-called land of the free.

Janis Joplin once sang, “Freedom’s just another word for nothing left to lose.” By her apocalyptic definition, we have just a little way to go before the United States’ anti-choice, forced breeding, white supremacist, proto-fascist Republican Party grabs the rest of our human rights. Our “freedom” will be the Orwell version from 1984 that signals its opposite: slavery. The United States’ horror movie version of exceptionalism strikes again, and won’t stop until we’ve returned to a nation where only white men make the rules, and everyone else is expendable.