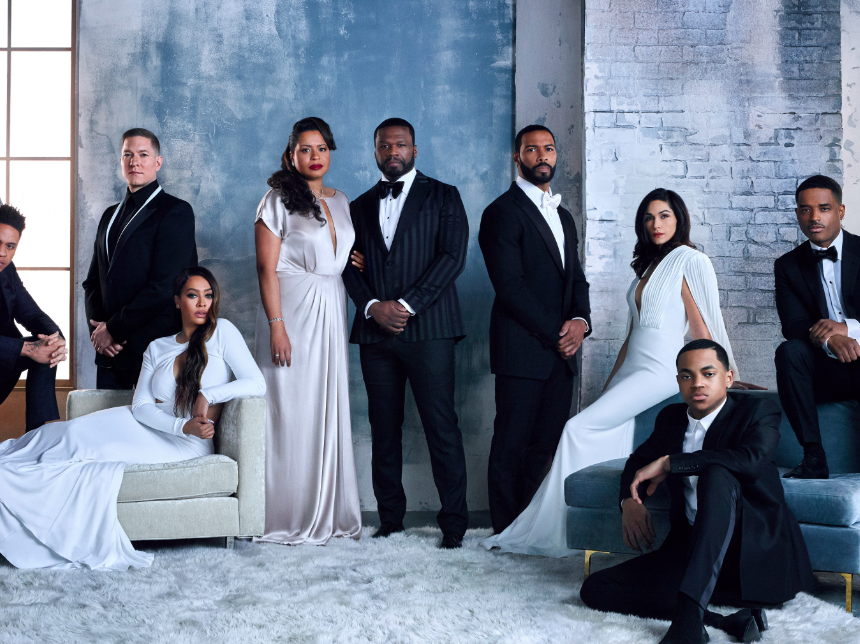 She started reading Shakespeare and university textbooks while still in her single digits, i.e., eight and nine years old. She grew up in the primarily white East Coast town of Westport, Connecticut, graduated from Brown University, and followed by getting her masters’ degree at Columbia.

Writing articles at GQ magazine got her noticed by producers in Hollywood wanting to turn her articles into shows. Eventually, she came out to the West Coast and became a staff writer for The Bernie Mac show, followed by freelance writing episodes for shows including Beauty and the Beast, ABC’s short-lived Eli Stone, and The Good Wife on CBS.

She sold the idea of Power to rapper/actor/mogul 50 Cent along with long-time film and TV producer Mark Canton (Men in Black, Batman, Immortals), and the rest is five seasons of love story, brutal action, and intrigue as the audience watches a mega-successful drug dealer trying to go straight.

In person, Kemp is dressed part hurried-power-woman, with sleek black hair and heels underneath her trousers, and part harried-writer, with many fatigue creases in those trousers from sitting for interviews since morning and it’s now lunch time. She grabbed a quick bite at the Television Critics Association summer press tour before sitting down with BGN to discuss the pleasure and the pain of writing, show running, and working in Hollywood.

What made you decide that 50 Cent as Kanan would be the villain?

In terms of why Kanan does some of the things that he does, 50 said to me while we were developing Kanan, “I want to be the worst character on television.” I said, “Okay, I can do that for you.”

What are some of the most challenging things, throughout the whole arc of five seasons, you found as a writer?

It’s hard for me to write action. I’m not good at writing action scenes. I think the question that you are looking for is what was hardest to do?

I was very sad to see Lucy Walters (Holly) go. Killing Holly off the show was very difficult for me personally. Especially since it was within the context of domestic violence, because we didn’t want to glorify domestic violence. Other than that, I can’t think of anything that has been difficult in that way. That was a tough day. It was a tough day on both Lucy and Joseph (Sikora); very tough, very hard.

Anytime a character dies on a show, the actor has a rough day, but that day all of Lucy’s and Joe’s scenes were shot in chronological order on that one day, so it was like a play. So 3.05 [Season 3, Episode 5] was very challenging.

Also the mechanics of the whole show seem challenging. There must have been times when you said, “Can I do this? What will this mean to the audience?”

I actually don’t look at it like that. For me, it’s about what’s the best storytelling, what is surprising but inevitable. What pushes the audience to challenge them — not me, them. What makes them feel something.

I know what you are trying to get at. The question supposes that I feel the same way as the audience, but that’s not what I am doing. I am telling a story to make the audience feel a certain way, so I want them to feel that way.

I am not trying to shy away from it. I am writing toward it.

You’re definitely a nerd girl based on your background.

What does that look like in Hollywood, in executive rooms?

A couple of things are actually kind of interesting. I was in a room with an executive, and he asked me what college I went to. Now how could this possibly be relevant? I am 42 years old; then, I was 41.

This is not relevant, but education and nerd status still buys you viability with mainstream culture in a way that is surprising. When I first met this person, he said, “You’re not what I thought the creator of Power would be like at all.”

I asked, “What do you mean?” because I knew what he meant. He was expecting someone who felt like she was more a predictable part of the culture. No, I’m just as Black as anyone else, and I’m a total [expletive] nerd.

I’d say that being a BGN has been one of the best things.I am also a TV nerd. I watched a lot of TV as a kid. That also helps me in my business.

Do you find anything hard about writing at this point?

Of course, being a single mom. Show running cost me my marriage, for sure. Traveling extensively, having to put a ton of energy towards not just other pursuits but toward other men, not in a romantic or sexual way but just in terms of taking care of their needs — I wasn’t able to bridge the gap. I think that is something that is real about what this is. I sacrificed a lot — my daughter’s childhood!

But she will grow up to be a nerd, like her mom. She’ll read and do all those things.

She already is. She says she wants to be a scientist, an inventor. There’s no hate, no shame in her game.

Now what kind of show would you like to do next?

We’re doing a whole Power universe. It’s MCU for Power with different characters having their own special things. My fantasy would be to write about Black women in relationships with each other and in romantic partnership with men and with other women. A real world of Black women — friendships, sisterhood, mother/daughter — that’s what I would like to do.

Curtis “50 Cent” Jackson chats with BGN on why it’s Power’s final season and what’s next.

This show is iconic. Why end it now?

I think traditional television and premium cable bring people the iconic shows like The Sopranos, The Wire; they run seven seasons and then they stop, so this is in [network and cable’s] DNA of when it should stop and I don’t believe in this. So I am not going to stop the show. There’s an extended season (15 episodes instead of eight) but when Power’s season finale is done, Power Book 2: Ghost starts 36 to 48 hours after. It continues to show you the aftermath of the other characters, also introduces some new characters.

They will be able to follow it easier because it’s coming on in the same timeline. Everybody that is enjoying it will come back to watch the following season and they will see the aftermath of all that’s happened and how people will try to move forward from it.

The other spin-off from the Power series, Raising Kanan, will be in the heart of the actual drug epidemic in Queens at that point and showing his mom and the influences that developed him into the guy he was during Power.

The spin-off will likely start with eight episodes.

Are we going to see any surprise stars on the last season?

I don’t do that and when [Kemp’s] suggesting that I go, “Feel like we need them?”  What you’ve got is a cast that is really strong because you didn’t clutter it bringing everyone in and out. We’ve developed a strong enough following. Empire went and brought everybody on and people would say, “I’m doing Empire’ and I didn’t see it because so many people did Empire that I didn’t really stop to see it.”

When [Empire marketing] said, Empires Are Built on Power, they seemed to have hit the bullseye on the targeted audience we were going after. As an executive, I would probably write Empires Are Built on Power but for me in the position that I am in, I’m going to make a fight and the reason is because people pay attention to the details of what you’re upset about more than they do on a basic press release. When I said they were trying to steal my stuff, I was tying myself to the Fox marketing fund because Fox spends a lot more money marketing versus a premium cable area.

(Mary J. Blige will have a role in Power Book 2: Ghost)

Joseph Sikora tells us what finally lets you inside.

What was the most challenging thing about playing Tommy?

Making sure the calibrations of the character were all true all the time. His vibrations are the most extreme of any character in this show. He has the highest highs and the lowest lows. Keeping that based in truth and reality rather than going from caricature to caricature and trusting myself to make sure that I did that was the most challenging.

What will you miss about Tommy?

What are some of the more “out there” Hollywood job offers you’ve gotten since playing this role?

Almost none. I am going to join the cast of Ozark for Season 3.

It’s incredible to me how few people in the industry know this show. I had a casting director ask me what I’d been doing. I said a show called Power, and she said, “Oh, like Powers (2015–16)?” and I said, “No, this isn’t like Michael Madsen in spandex. This is a totally different show (Laughs.).”

Then they say, “Oh, I think I’ve heard of it.” You think you’ve heard of it? It’s 10.3 million viewers on combined platforms. It’s the #2 show on all of cable television.

I went into your Instagram. People want to know so much more about you.

They think I’m being secretive. I’m just not good at Instagram and my wife is not on social media at all. I’ve never posted a picture of her. Nobody on Instagram has a picture of my wife at all, so people are always asking. She’s just super private

So you guys are really into pets.

We love animals. We foster four cats, and we babysit everybody in the world’s dog. My dog was 19 or 20 when she passed a few years ago, so I had her for my whole adult life. People ask me when I’m getting another and I say, “When I’m ready.” And, it’s not about getting another one. They find you.