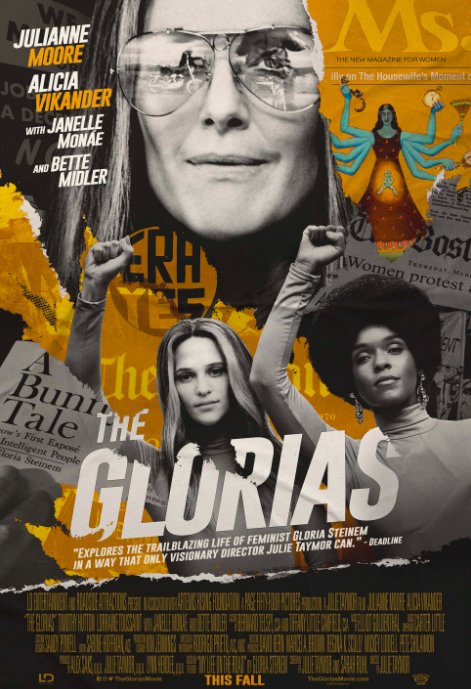 At a time when demonstrations for diversity, equality, and justice are being held in cities across the country, The Glorias is a film that shows us how far we’ve come and how far we still have to go.

LD Entertainment and Roadside Attraction bring us The Glorias, a film based on the book My Life on the Road, by Gloria Steinem. Steinem is an exceptional woman and role model.

While The Glorias is a film about her, it is most importantly a film about female empowerment and everything that the movement stands for. I learned a lot and believe a new generation of women will, too.

Written and directed by Julie Taymor (Frida, Across the Universe), The Glorias is a nontraditional biopic that follows American feminist, journalist, and social-political activist Gloria Steinem as she connects with some of the most inspirational and legendary women of modern history. The film follows Gloria from her time as a child to her studies in India as a young woman, to the founding of the liberal feminist pages of Ms. Magazine in New York, to her role in the rise of the women’s rights movement in the 1960s, to the historic 1977 National Women’s Conference and beyond. It highlights staples of Steinem’s persona like the aviator glasses, her blonde streaked hair, the outfits, the undercover expose as a Playboy bunny. Spanning Steinem’s impactful history, the film highlights women and the fights they have fought over the decades. The narrative isn’t driven by finding romance, divorce, or men for that matter. It’s a road story about Gloria’s “meetings with remarkable women.” It’s a story about having a voice about legal abortion, violence against women, sexual harassment, race equality, and gender equality.

The film stars Julianne Moore (The Kids Are Alright, Still Alice), Alicia Vikander (Ex Machina, Tomb Raider), and Lulu Wilson (Annabelle: Creation, The Haunting of Hill House) as Gloria Steinem at different ages. The film also features Janelle Monáe (Antebellum, Hidden Figures)  as Dorothy Pitman Hughes, Lorraine Toussaint (Selma, Orange is the New Black) as Flo Kennedy, Bette Midler (The Politician, Hocus Pocus) as Bella Abzug, and Kimberly Guerrero (Longmire, The Cherokee Word for Water) as Wilma Mankiller. The diverse cast is one of the many appealing points of this film. However, while Moore and Vikander as two of the Glorias are great actors, their performances came off like they were trying too hard to be Gloria. In their attempt to recreate the persona of Gloria, it fell short. They were trying to impersonate a living person and it came off a little over the top.

While the film goes through Steinem’s life, the best sequences were those when she is with her father Leo Steinem, played by Timothy Hutton (How to Get Away with Murder, The Haunting of Hill House). Those sequences seemed to be part of an entirely different film, but they showcased one of the few men in Gloria’s life who supported her endeavors. He was a father who showed her that it was okay to live outside the norm, while many of the other men in her life showcased their chauvinism and lack of empathy for women.

The Glorias is a wonderfully diverse film from the lead cast to the background and supporting roles, populated with women from many different ethnic and cultural backgrounds. The film showcases collaboration and comradery amongst women. The film also showcased women being women. Their thoughts, their dreams, their wants were not hidden from the audience. It sends a great message to women of all ages, colors, and creeds.

While the themes of diversity and female empowerment are there, the more metaphorical moments threw the film slightly off-kilter at times, like a spin top getting ready to fall over, but then it finds its rhythm again. The spin-top action was aided by the editing. While I can appreciate the artistic flare, the film didn’t flow very well. It was almost as if there was a different editor for each segment of Steinem’s life.

There is a lot to digest in The Glorias, but the overall themes and subject matter make it an interesting film. The interwoven archival footage makes a bold statement. The authenticity in those moments of people, places, and events bring a sense of nostalgia and urgency. Everything about the film screams for stronger rights for women of all colors. The ending is powerful. It drops you into the now and makes you ask yourself what you will do in the battle against injustice.

The Glorias will be available September 30 on digital and streaming exclusively on Prime Video.

Alicia Vikander on the Immigration Experience in ‘Blue Bayou’