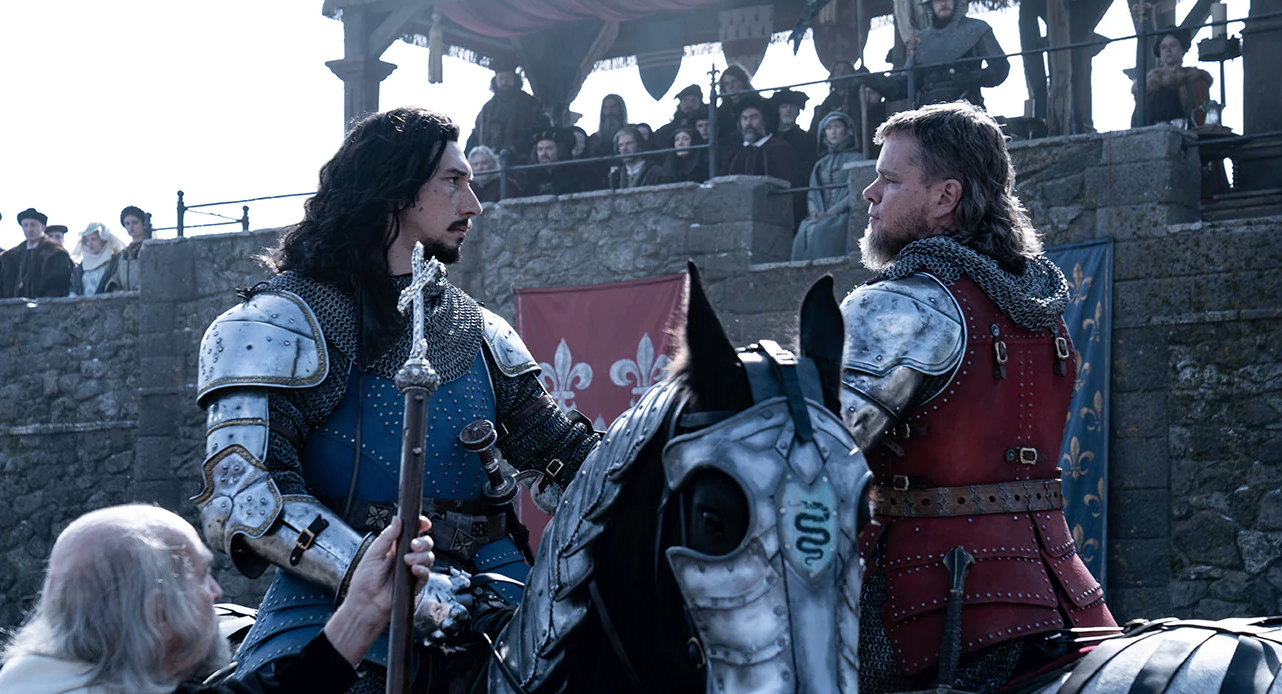 The latest epic from Ridley Scott, The Last Duel, is a stunning, bleak, and often mind-boggling epic. However, the engaging and often harrowing narrative is belittled by questionable production choices. How could such a beautifully shot, thought-provoking, and heart-breaking epic only be saved by Jodie Comer and a blonde Ben Affleck? It’s all about how you look at it.

The film opens with our three main characters (Jean, Marguerite, and Le Gris) preparing for the duel. As soon as the two duelers square up, we’re transported to the beginning of three stories each offering their version of what really happened. The longest tale is told by Damon’s Jean. In retrospect, it’s understandable why his went first, but what’s a bit baffling is why it’s so long. The movie is a packed 152 minutes, and it’s felt in the first 30. Understanding the structure of the film, it only makes sense that Jean’s story goes first, though it still feels bloated and mostly unnecessary.

Jean is a stocky mass of man with a mullet and a thick chin beard. He also has a gnarly scar, the origins of which remain unknown. I wonder if this is a Ridley Scott trope, as I’m reminded instantly of Marcus/Caleb played by Travis Fimmel in Scott’s TV series, Raised by Wolves. Jean’s personality and demeanor match his appearance. He’s staunch and overly serious. It fits to give dimension to a man who doesn’t seem to have much of any. It’s too bad then that the character falters by the frankly astonishing use of accents in the film.

While the need for certain actors to portray certain roles does exist, it’s generally accepted that these actors may not be able to master a 1360’s French accent. However, if Damon would have picked one and stayed with it, I think it would have been less of an undercut to Jean’s stoicism. Other actors fared well; English actress Jodie Comer (who is no stranger to accents in Killing Eve) does a fantastic job, and Adam Driver is delightful, especially in Latin. It’s the two Boston boys made good — Affleck and Damon — who can’t quite get it to work. With a mercurial cad like Affleck’s Count Pierre, this isn’t a problem, but it made Jean look bumbling and awkward.

This may have been the point, however, depending on the perspective. Jean sees himself as a warrior. He’s loyal and only expects what’s owed to him. He is longsuffering, and his life would be a lot better if people would just do what is right by him. The strength of his section is it gives us context for his relationship with Le Gris. In a few short years, Le Gris goes from young squire in need of a mentoring savior to being a left hand to Count Pierre and patronizing and sabotaging Jean at every turn, causing Jean to be deeply resentful. The irony of these moments is that in a narrative about a woman’s loss of bodily autonomy, at 45 minutes into the reckless love story that is the broken brotherhood of Jean and Le Gris, I had to ask, “What is this about?”

Was over an hour’s worth of male perspective necessary? I’m still not sure. If you want some gnarly Ridley-approved battle scenes, you’re in luck. They’re brutal and they’re beautiful and long. Scott is an immensely talented filmmaker, and that quality is all over the look of the film. From the lighting to the subtle changes in each perspective, it can be called brilliant. But it can also be frustratingly callous.

The next perspective belongs to Le Gris, and this is where The Last Duel really comes into its own. We begin to see the subtle differences between Le Gris’ story and Jean’s, and we see his skewed perspective of his first encounter with Marguerite. Adam Driver’s Le Gris is that special type of unhinged heartthrob that you’ve come to expect from Driver. He’s tall, he’s got luxurious black hair, and the man can work a cape. There’s a roguish handsomeness to Le Gris, which is either entirely appealing (especially when combined with Latin poetry), instantly repellent, or, more often than not, both at the same time. It’s a line he dances on, and he does it well. In his perspective and the perspective of Marguerite, we see how around her he becomes undone. It’s unclear if his interest in her is love at first sight or if he’s simply harassing Jean, but his obsession comes on quickly, and it’s authentic and terrifying.

Marguerite’s perspective is labeled “The Truth,” and it’s the most bleak. We see that her objectification began long before marrying Jean. The daughter of a disgraced father, her value lay in the land of their family. Comer gives an especially adept performance that instantly enamors you to Marguerite. The sheer amount of effort she gives just to be a woman during the 100 Years War far surpasses many of the other performances in The Last Duel. Again, I have to take issue with the fact that her section was the shortest when she clearly endured the most brutality. There is a scene that is shown in two perspectives, and it’s incredibly triggering and questionable if it needed to be shown twice. Sadly, this is a large bulk of Marguerite’s perspective, and, intentional or not, it adds another layer of sadness to her story.

A special mention must be made of Affleck’s Count Pierre. The insouciant count is here for a good time, not a long time, and his shenanigans give a much-needed breather. And he’s rocking a bleach blonde modified caesar and kind of working it? I think what Affleck does best in the film is stay out of the way. His performance is overstated, but it’s not overly ostentatious. He’s there as a supporting character and does a great job at it.

Overall it’s hard to rate this film. There’s an It’s Always Sunny in Philadelphia vibe where it can get away with being terrible and saying terrible things because it exists as a parody. The Last Duel shows how terrible it was for women in the late middle ages and you can see the parallels of Marguerite’s plight today, but it seems to do it at the expense of Marguerite — not only in the narrative but also in the production. Just like with Sunny, you either love it or you hate it. The choice is yours.

The Last Duel is currently playing in theaters.

Review: ‘The Tender Bar’ Falls Flat with an Average Storyline and Marquee Names