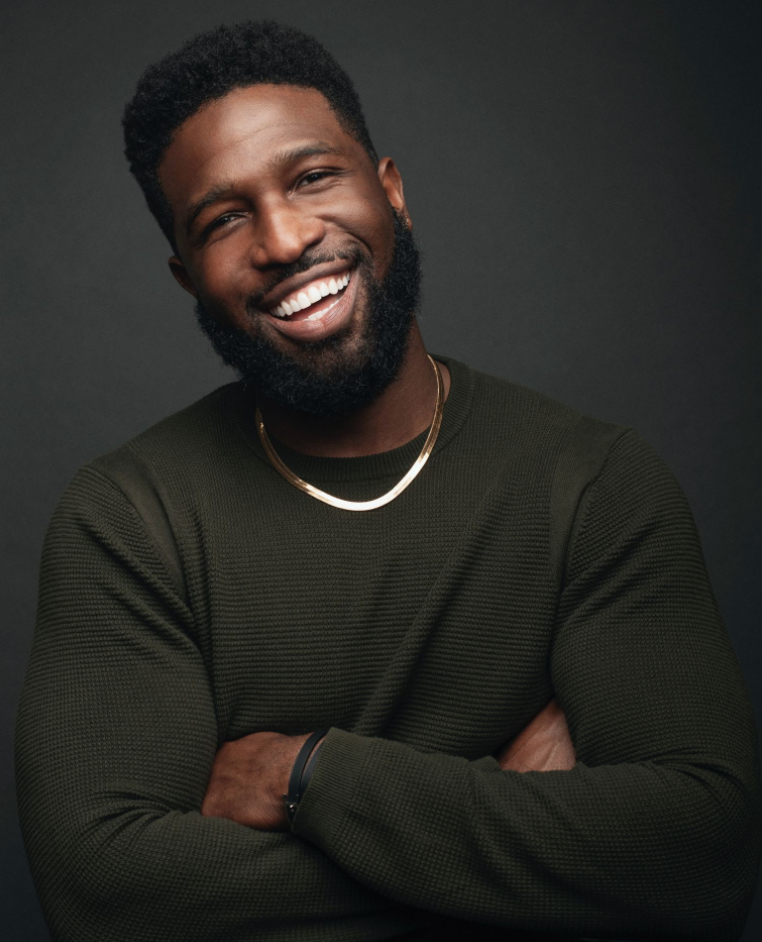 “We keep it allll the way one-hundred. All. The. Time.”

That’s one of the opening lines from The Latrell Show, a dark comedy theatrical performance starring Brandon Kyle Goodman, writer for the hit animated series Big Mouth and star performer with credits in the Netflix film Feel the Beat, Amazon’s rom-com series Modern Love, and Hulu’s Plus One.

In this premiere with the IAMA Theatre Company, Goodman plays the titular character of Latrell, an exuberant talk show host with a quick wit and fashionable flair that will feel like a familiar sort of entertainment to lovers of big personalities like Wendy Williams and RuPaul. Yet as you’re drawn in by Latrell’s electric personality, it quickly becomes clear that there are far darker depths bubbling beneath the glamorous surface. Cracks in their fun and carefree facade begin to show as Goodman takes us, quite literally, into a mind that is suffering at the intersections of Black and queer in America.

The character of Latrell began in 2019 when Goodman hosted monthly comedy shows at the Standard in West Hollywood. From the start, the intention was to get audiences comfortable with Latrell’s outlandish sense of humor, then hit ’em with the hard truths and sharp cultural insights.

In this new show, Goodman takes that idea and pushes it to its limit.

In a phone call with BGN, Goodman went into detail about how Latrell’s character and the concept of the show has evolved over the years into what audiences are seeing now. While their stage work has always had a subversive bent, they revealed that the events of last summer, specifically the murder of George Floyd and the virality of Goodman’s social media activism in response, changed the shape and direction of this new project considerably. Goodman said, “We had started talking about doing the show maybe in February [of 2020], and there was a different ending. But then when that happened, and the country and the world started having a different conversation, I had to change the piece because it was like, ‘Oh, now people are ready to have this conversation.’”

Goodman has been a vocal activist and educator in the fight for social justice for years. As talk about racism in America became more overt and mainstream, they felt the freedom and desire to push further with The Latrell Show’s topics and performances than ever before. For them, this largely meant taking a different approach to how they view and treat their audiences. “I don’t want to take care of my audience,” they said. “I feel like I’ve been playing a magical queer Negro in everything when I get cast, and playing that character supports the white protagonists and makes people laugh — and that’s kind of it. And I’m sick and tired of taking care of, in particular, white audiences.”

The Latrell Show does not coddle its audience by any means. With references across the gamut of pop culture — from the documentary Blackfish to the life and times of Aretha Franklin — Goodman calls out the pervasiveness of white liberal racism and the myriad of ways Black people are forced to navigate it.

While the show always holds white audiences accountable, it asks just as much of its Black audience, and especially straight cis Black people. Goodman makes it clear that there is a need to tend to and protect Black queer people with the same tenacity and compassion that the rest of the community gets — and voicing that need was scary, they shared, as a non-binary Black person.

“My biggest fear,” they said, “was not around taking white people to task. It was taking Black people to task…I think as Black queer folx there’s this complication of the intersection where we have our reverance for our Blackness, but also some of the most harm that I think I’ve experienced has been at the hands of Black people.

Pushing past the fear and advocating for the full and complete inclusion and respect of all Black people became a clear mission of the show.

As the show goes on, we get more and more layers to Goodman’s performance. As a graduate of NYU’s Tisch School of the Arts, they deftly carry the audience through a complex web of very raw, very real emotions. Exploring rage was a significant part of Goodman’s message with this piece, noting: “We’ve been taught that our rage gets us killed. Yet rage is such a part of the human experience, and if you’re having a Black experience, how can you not feel rage?”

In a powerful monologue, the character Latrell highlights and explores the ways in which Black emotions are policed, restrained, suffocated, yet still somehow overwhelming. The dynamic theatrical performance is produced in a way that hits all the right tones at the right times, in large part due to the prowess of co-directors Stefanie Black and Devere Rogers. Goodman admitted that, during the production process, it was a challenge to channel the full range of all the emotions on display while also maintaining the right level of support and safety to protect their own mental health. “Therapy was huge,” they said.

While the raw and unfiltered emotion of Goodman’s performance can be a lot to absorb and hold onto, anyone watching the show can see that the accountability both white and straight Black audiences are held to starts and ends with love. “That was my hope — that there’s reverence and that there’s love. I love being Black. I know our people are just incredible and phenomenal, and so we have to be able to hold each other accountable as well.”

There’s plenty more coming from Brandon Kyle Goodman in the near future, including continued involvement as a co-writer for a number of TV shows and their upcoming book that will talk more about the intersections of race, gender, and sexuality.

Tickets for The Latrell Show’s virtual viewings can be purchased at www.iamatheatre.com and will be available through late June.