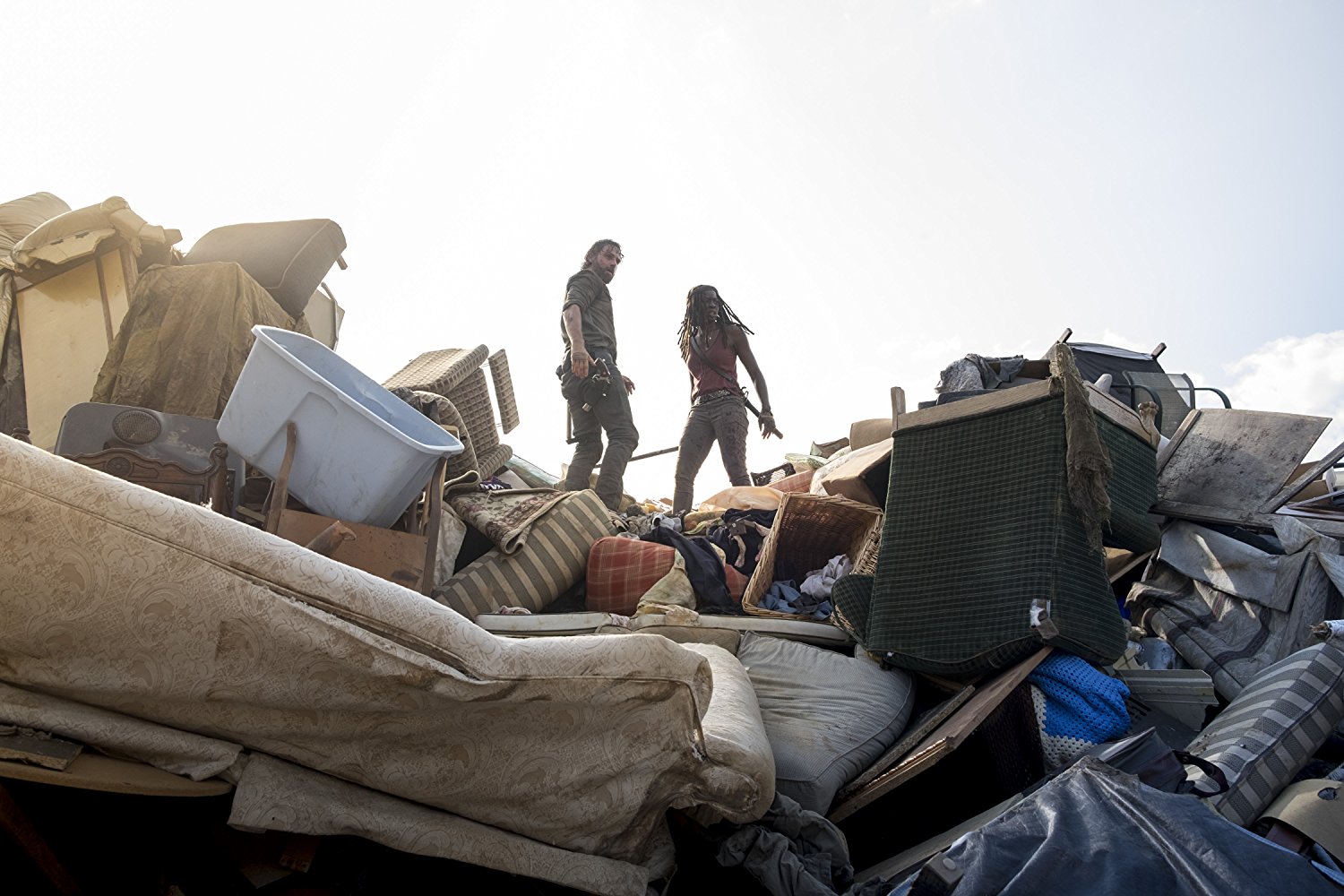 With its mid-season premiere, The Walking Dead dealt an emotional blow to fans that I don’t think will be easily gotten over. “The Lost and The Plunderers” picks up where  “Honor” ended, with Rick and Michonne at Carl’s grave trying to come to grips with his death.

Michonne stands with a look of complete devastation on her face. Hearing the moans and shuffling of walkers behind her, she turns and begins cutting them down. With the sound of the katana slicing through flesh in the background, Rick crouches by the freshly covered grave and hangs Carl’s gun on the cross. After taking one final look, Michonne and Rick head to the house to pack up and leave Alexandria for the last time. As Rick gathers supplies inside, Michonne notices the blue handprints that Carl and Judith made on the porch and once again we’re reminded this is the second time she has lost a son, but before her tears can fall Michonne hears more walkers making their way towards them and tells Rick they have to leave.

Just as they are about to get in the van, Michonne sees the gazebo on fire. She and Rick rush over and try to extinguish the flames but to no avail. This moment was interesting to me because it not only showed Michonne and Rick trying to save what they saw as a connection to Carl, but I saw it as the writers metaphorically trying to put out the flames that are destroying The Walking Dead bit by bit. I know that sounds just a tad dramatic and morbid, but am I wrong?

Once they make it onto the road, Rick asks Michonne if Carl meant for them to stop fighting the Saviors and surrender, and frankly, I want to know the same thing too. This whole story of Carl doing a full 180 (in less than a day mind you) from the plans he made with his father to take down Negan makes absolutely no sense. Negan has NEVER shown that he is someone who can be negotiated with to form partnerships. The Negan the writers have created is a sadistic murderer who gets off on tormenting people — the idea that he’s someone Carl would want to work with is complete nonsense.

When Michonne notices a letter addressed to Negan in stack Carl wrote, Rick quickly changes the subject and says he needs to talk to Jadis because he and the group still need her and the rest of the Trash Pail kids, to which both Michonne and I said “WHAT?”

It is literally day two in this season and for the third time, Rick is going to Jadis and her people for help. Once more, Rick is turning to a group of people who have either betrayed him repeatedly or done absolutely nothing to help. They arrive at the trash heaps and end up trapped between a pile of garbage and walkers. While Michonne and Rick try to figure a way out from their unfortunate situation, the scene switches to Negan commanding his people to look for something in all the “nooks and crannies” — and no — he’s not talking about English muffins.

Simon expresses his frustration at the way things are going and Jadis and her people being allowed to defy the Saviors without punishment. Negan tells him that he needs him to get over his personal feelings because they are a resource for the Talkers — oops — I mean Saviors. When Simon disagrees, Negan warns Simon that he should get back with the program because saving people the way they do is hard but it work. As I was typing this, I had the revelation for why I hate Negan so damb much — apart from his murdering Glenn and Abraham. Negan isn’t just a sadist, he’s a slaver and a colonizer.

The proof has been there all along.

Colonizers are people (white people) who go into territories that have established communities and through violent methods steal the indigenous people’s land, food and personal property and claimed it for their own. Like the colonizers of yore, the Saviors went to The Kingdom and Alexandria and took their food, medicine, and furniture away.

Slavers brutalized, maimed, raped those they enslaved and took and sold the children not only for profit but sometimes as a punishment and a way to control the mothers. They got off on tormenting people and even used the bible to justify their actions. Back in the day slave masters would preach that God sent them to teach the “savages” how to be civil because without masters the slaves were too inept to survive — sounds familiar?

Now I’m not saying the characters in The Walking Dead are by any means slaves, but the similarities in the methods that colonizers and those involved in the slave trade used and they way Negan behaves — to me — can’t be overlooked. Like slaver, Negan and his people kidnapped Michonne, Glenn, and Daryl and mentally tormented Rick by threatening to cut off Carl’s arm. He makes women like Dwight’s wife sleep with him in exchange for food and protection and repeatedly humiliated and threatened Rick with death in front of his family in order to mentally subjugate them. Negan in his very smarmy way even implied he would take Judith if Carl didn’t cooperate and be nice to him.

As with colonizers and slavers, Negan believes that all of the heinous acts he commits is for his victim’s benefit, he preaches that all the people he kills are sacrifices that must be made and without him the people wouldn’t survive, despite them doing so before he stole their supplies. With all the thinly veiled racism, blatant misogyny and evilness it’s no wonder I — a black woman — can’t stand him. Negan is nothing but a thief who thinks that respect is taken through fear and calls himself a savior when he’s really the devil. 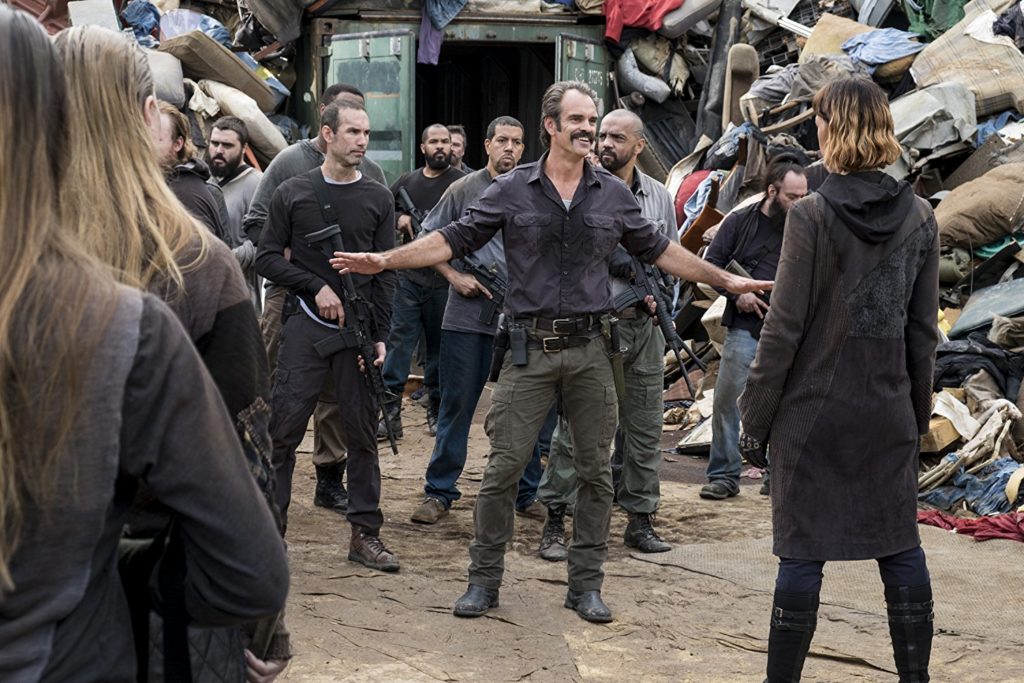 Simon makes it to the junkyard and, after a brief exchange with Jadis where he got all in his butt hurt, testosterone laden feels, he orders his minions to kill her people, all of them. Can you tell me what sense it makes to kill people you consider to be a resource? Not only was this a stupid move on Simon’s part but it actually showed these characters provided nothing of substance to the plot. Without the trash pail kids in the picture the story does not change in any fundamental way, all the time spent on them could’ve been used to develop this season.

While Simon lies to Negan about things going fine with Jadis, it is revealed that the walkers Rick and Michonne became surrounded by were Jadis’s people. From her perch on top of a junk heap Jadis calls to Rick, when Michonne asked what happened she’s told the saviors did it. In perfect sentences, Jadis starts to talk about her past, art…… and some other stuff, getting fed up Rick decides he doesn’t have time for Jadis to wax poetic so he and Michonne start to fight their way through the walkers to the exit. When Jadis asks to go with them my dude was like “aah nope”, fired a shot into the air and departs.

Feeling guilty about leaving Jadis behind Rick tries to reassure Michonne and himself that Jadis would be ok, but Michonne asks him if that may have been what Carl meant by helping others when there is a choice. Needing to take a break Rick pulls the van over, gets out and reads the letter Carl wrote to Negan, now we don’t know what it said but Rick contacts Negan on the walkie-talkie and tells Negan that Carl died.

Hearing the news, Negan shows the barest hint remorse and tells Rick he had plans for Carl’s future. Rick not wanting to hear any of that foolishness, interrupts and promises to kill Negan and I really wish he would. Negan quickly changes from his forced moment of remorse to blaming Rick for Carl’s death, because how dare he stand up in defiance against Negan. He actually had the unmitigated gall to tell Rick that he was saving Rick’s people by killing them and Rick should give up because he already lost.

When I say I was deeply annoyed I mean it. We the viewers were really supposed to believe this narcissistic douche actually cared about Carl? Sure Negan saw that Carl could be coldblooded and had a modicum of admiration for him but that doesn’t equate to actually caring about who Carl was as a person. If anything, all that scene did was show Negan saw Carl as another way to get one over on Rick by taking his place as Carl’s father once Rick was gone. I realized this whole Negan situation isn’t about good versus evil or right from wrong it’s a dang dick measuring contest. These last two seasons have just been about Negan trying to prove his manly prowess, UGH!

Hmm, I feel like I’m forgetting something……oh, Enid and Aaron were at Oceanside but now they’re not.

The Walking Dead shows Sunday on AMC at 9/8c. Here’s a sneak peak at the episode nine episode “Dead or Alive or”