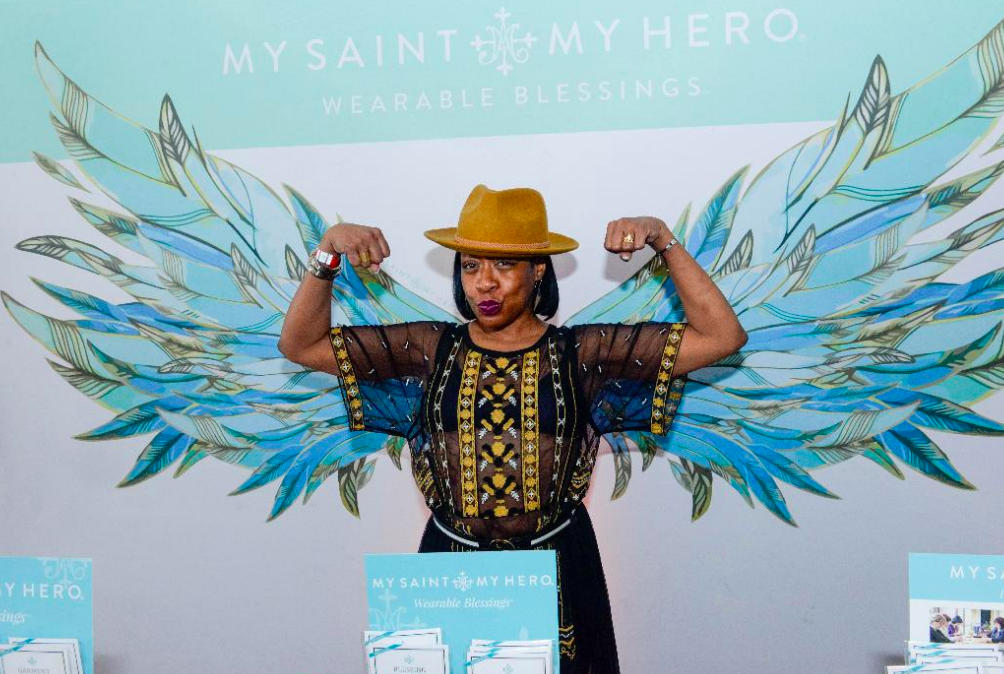 Don’t go Hollywood on Tichina Arnold. She’s a homegirl all the way. She acts for a living but is never actressy. She has “people” but they are relaxed, not overly fussy.

BGN caught up with Arnold having a quick bite with her publicist while chatting with an industry executive fan and giving a quick wave and hello to NBA great, Norm Nixon (father of Vivian Nixon, a TV actress) at the Doris Bergman Luxury Lounge and Party at the trendy Fig & Olive restaurant during Oscar weekend.

After praising Nixon (and wife Debbie Allen in absentia) on their parenting skills, Arnold briefed BGN on her current outlook on life and how that has created some new situation comedy material for her TV character.

Catch us up. What is going on with you?

I’m a menopausal woman with a teenager, a mean-ager. So there’s a vortex going on in my life but it’s one of those things that is a wonderful vortex. I am finally on a major network. This is my first time doing a sitcom on a major network.

Besides that, I am working with amazing people. Working with Cedric the Entertainer is a joy because he’s a wonderful human being. Life is good.

I want to continue to inspire people. I want to keep my feet on the ground. I want to raise a very productive daughter so she can become a woman who can give something to humanity. So I am pretty simple and…I like my coffee in the morning.

Anything that we should know about your character that is coming up on the show?

There’s some funny stuff coming up on The Neighborhood but I have a movie coming out on Netflix called The Main Event.  It’s the first time I’ve ever played this type of character. They call me G-Ma. So working on that film and creating a relationship with Netflix as well as doing a film for kids…it’s one of those films that everyone can watch.

I used to watch the World Wrestling Federation, WWF. That is what it was back then, now it’s WWE. For them to research and reinvent themselves in a way where it’s conducive to what’s happening now… We don’t have many family movies so they are in a genre where I want to be. To have films that everybody can come to see.

Fans of The Neighborhood are also going to want to know what’s coming up.

As you know I share my menopausal moments with everybody, with the world! I’m not taking this burden on by myself. If I feel it, everybody around me is going to feel it.

Jim Reynolds, our executive producer and creator walked up to me and asked, ‘Would you mind if we did a menopause episode?” I said, “Absolutely do it!”

I don’t mind and I like to make fun of menopause; to find the funny moments where you laugh instead of cry. I think that it is making me a better person because you are conscious of something. You are battling something.

My sister has lupus, and we have a foundation. We are learning so much by having our issues, our problems. But we welcome them because we are working on ourselves.

The Neighborhood is just a great show, especially in this day and age. We need to laugh. [The show] is not too racy. It’s not too corny. People can watch our show and see a Black woman and a white woman really enjoying their relationship.

They can see a Black man and a white man learning how to get along and coexist. So I think it’s an amazing show.

So the show is teaching?

Yeah, and through what better way than laughter. Also, a lot of people don’t have anything to compare it to. Maybe you have people who are racist, or whatever label you want to put on them, who may watch the show and see something they’ve never seen before, or something that makes them inquisitive.

Party attendee Norm Nixon had thoughts on the tragic death of Kobe Bryant and the Los Angeles public memorial scheduled for the Staples Center on February 24.

Black-ish and Mixed-ish star Anthony Anderson, at the same event, said he planned to attend the service. “I plan on being there if work doesn’t get in the way.”

Are you going to go to the memorial and do you have any idea of who’s on the program?

No one has any idea. So we’ll just see. I’m sure there will be a ceremony for a lot of the Lakers players, but we will have to wait and see.

How is everyone in your camp?

We are all good. Kobe was a big supporter of our dance academy. I had a chance to spend time with him within the last several months and talk about a guy who made a transformation.

He left sports. That was a chapter of his life, and he was on to something new. I think his work and his impact on the world had just started.

I know this affects so many fathers and daughters.

Oh, all those kids. The parents with their daughters, the coach, the wife and his daughter. He has two kids that are orphans. The mother that died. The father has those three kids. Kobe’s baby girl will never really meet him. It’s just tragic.