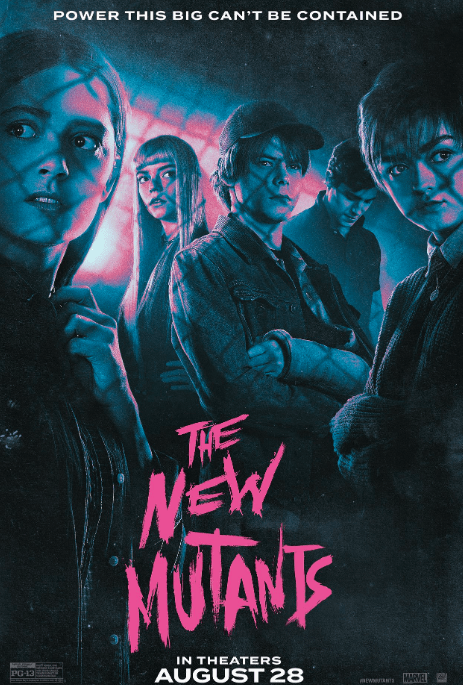 The X-Men are my favorite group of superheroes. Ever since the animated series, I have been a fan. I was five when that show first aired and have been a fan of mutants and what they stand for some thirty-plus years. So, I wanted to love The New Mutants. I didn’t hate it, but there is nothing spectacular about this film.

Fans have been waiting for The New Mutants for a long time. After script rewrites, the Disney-Fox Merger, and multiple release dates, the film is in theaters, or as close to a theater experience as we can get right now. I don’t know how other people will see it outside of California, but I saw The New Mutants at a drive-in with a clear hi-def digital screen, great sound, and a fun movie-themed display with trivia. Set up for an enjoyable evening in a safe bubble. Sad to say, the display and trivia were more exciting than the film itself. It’s tough to sit through a film you’ve been excited to see for so long and just feel this sense of being letdown scene after scene. So many things go wrong in this film, and you wonder how the filmmakers didn’t notice.

The New Mutants is directed and co-written by Josh Boone (The Fault in Our Stars) and stars Maisie Williams (Game of Thrones) as Rahne Sinclair, Anya Taylor-Joy (Split) as Illyana Rasputin, Charlie Heaton (Stranger Things) as Sam Guthrie, Alice Braga (Queen of the South) as Dr. Reyes, Blue Hunt (The Originals) as Danielle Moonstar, and Henry Zaga (Trinkets) as Roberto da Costa. The New Mutants follows five young mutants as they discover their abilities while being held in a secret facility.

For a film about mutants, the action didn’t capture the audience as it should have. The crazy thing is, these are mutants with interesting, if not cool, powers.

When it comes to the characters in The New Mutants, the protagonists and antagonists are muddled. We are fed information about the facility and the people behind it with blurry images and no context. Dr. Reyes is just another tease added to the pile of the big Essex Corporation that so many X-Men films have hinted at but never fully talked about. As a villain, she was weak. Magik, Wolfsbane, Sunspot, Mirage, and Cannonball didn’t get the spotlight they deserved. When introducing new characters, there should be some type of origin tale for them, a showcase of when and how their powers first manifested. While the film gave some small nod to that via monotone dialogue, it failed to hit a major chord.

There are so many questions that aren’t answered, too many questions that leave the audience unsatisfied. Wolfsbane, played by Williams, got the short end of the stick. This is a character who can turn into a wolf, but what we got was a gimmicky Halloween costume version of the character who did nothing but scratch people. In the more subdued scenes, we see a full wolf, but in the action sequences when a full wolf is needed, we get a half-formed version of Wolfsbane.

While the teen angst and disregard for authority were entertaining, the true intro to who these people are was lacking. The audience didn’t have a way to connect. We didn’t care about any of them to the extent that we should have.

When it comes to the story, the plot can be figured out 15 minutes in. After the opening scene, the pace quickly died. A good chunk of the film was filled with lazy dialogue that highlighted shame over resolution. The shame these kids had of powers that they were supposed to be learning to control with the help of doctor Reyes changed what the plot was supposed to be. It made you wonder what they have been doing all this time before Danielle got there.

The fear elements were intriguing and could have replaced a lot of the sitting around. The Demon Bear idea was there and cool at first, but the ending unraveled the hard work put into scaring us. The pacing was a huge red flag for The New Mutants. The elements were there, but the way they were shot was either too quick or too slow. There was also a lesbian plotline that seemed to be added solely as a device to show diversity. It added nothing to the story.

We have so many good examples of teens with powers in a horror setting set in the ’80s and ’90s, it’s a wonder how this film missed the mark. The comic in which the film is based on was about taking risks. There didn’t seem to be any risks taken in this film. It was played safe, to the detriment of its entertainment value. I hope Disney takes the time to learn from Fox’s mistakes and handle the X-Men with a little more grace and style. Audiences love the X-Men, and we deserve something, well, better than this.

The New Mutants is in select theaters now.