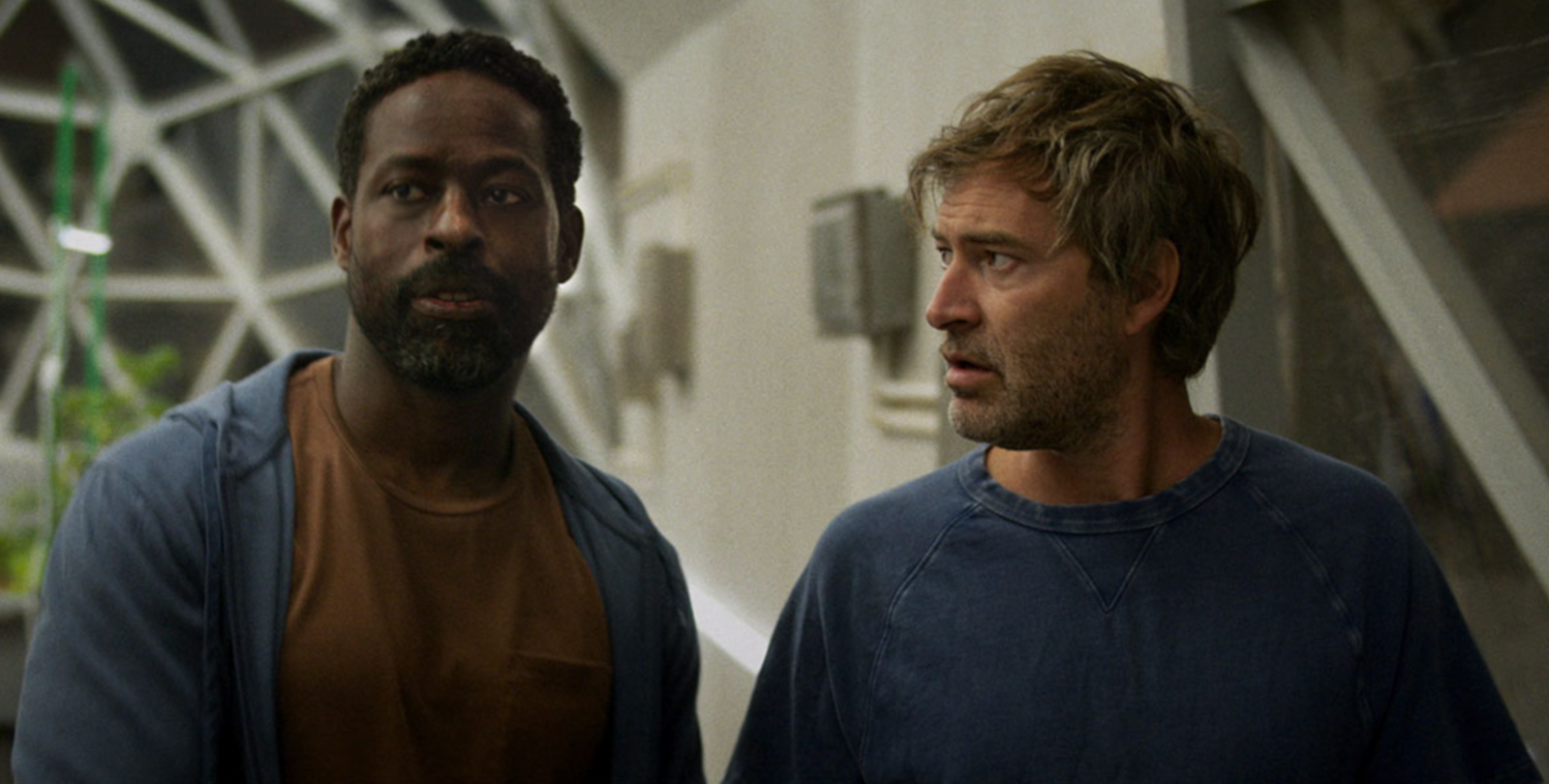 The latest feature from The Duplass Brothers Production co, Biosphere was a surprise TIFF entry. When I saw the synopsis, I was intrigued, albeit a little wary. But when I saw the talent and team involved, I knew I was in good hands.

Set in the not-so-distant future, we enter the biodome world of Billy (Mark Duplass) and Ray (Sterling K. Brown). These are the last two men on Earth and potentially in the galaxy. They’ve lived in the biodome for years and have settled into a routine. Billy and Ray are bosom buddies and have known each other as children. Their ability to get along is akin to their familial feelings for one another.

This comes into play as they face the threat of extinction. Part of the biosphere they created, which allows them to breathe oxygen and grow food, has been removed. The two grapple with the idea of their actual mortality. Tensions rise as they start to deal with their own versions of depression when suddenly, “life finds a way.”

Yes, they gleefully quote Jurassic Park and are filled with renewed hope until their lives become impacted by the same miracle. I won’t spoil it beyond that, but just know that it’s as delightfully weird and thought-provoking as you’d think.

I won’t sugarcoat it — I loved this movie! I knew I’d be partial to it regardless. I love movies about men battling their own toxic masculinity. But along with the casting, I went in with eyes wide open, and every expectation was met and exceeded. A byline travels throughout the film and further informs the story. We find out that Billy was president of the United States and the reason everyone (literally?) blew up.

The details are never fully exposed, which makes sense given, it’s been these two men in this confined space for years. They’ve probably already hashed it out to death. The cause is less important than the aftermath. It’s a storyline that seems extraneous but ultimately ties into the main plot. We see both men grasp with clenched hands the same archaic views of masculinity that probably got them in the situation in the first place.

Add all of this to a mysterious green light that is growing in the sky, and a childhood fight involving a party magician and bowling ball, and you get a well-rounded film that enthralls from every angle and keeps you guessing to the very end.

Biosphere marks the directorial debut of Mel Eslyn, who has served as president of Duplass Brothers Productions and producer on other projects such as The Lady and the Dale. Zackary Drucker was also part of the production team, which added a touch of relevance to the story. While Biosphere was 100% my jam, the audience I watched with had some divisions. I asked the person next to me if they liked the film. They swiftly replied, “no!”

I was a bit shocked. While still respecting their opinion, I asked why. The answer I received points to what I could perceive as the only flaw in this film. The audience member claimed they felt the movie was transphobic. I mentioned the heavy themes, but the film handled them with humor. It’s a “laugh or cry” situation, and Biosphere chose — to great effect — to go the laugh route o manage the rising tensions. The audience’s member felt that the audience laughter was pointed toward certain body transformations.

It’s a valid concern. If you weren’t aware of the production team and thought it may be harmful to the community, then you’re bound to find some fault with the film. I told the member that I thought they were laughing at the reaction to the transformation, the hypocrisy of masculinity, but I’d be interested to hear his thoughts after the Q&A. I mentioned earlier that Zackary Drucker was one of the producers, and she’s been a trans-activist for years. Now, simply having someone trans on the production staff doesn’t always mean that every base is covered. But, the Duplass Brothers have a history of inclusivity and sensitivity that helped me manage my expectations.

After the Q&A, the audience member’s fears were assuaged. I was happy to hear it because I enjoyed the film so much. On one hand, a film should be able to convey these messages without outside knowledge or a Q&A to explain your intentions. On the other hand, if you’re going in looking for trouble, you’ll get it.

There’s no way around it, Biosphere is weird, unconventional, and, literally, nothing like you’ve seen before. Its exploration of masculinity is authentic, hilarious, and horrifying. The whole time I watched knowing if there were two women in this situation, it would be a 20-minute movie. The “plight” of these men was everything I’d seen before, and the complexity came in trying to understand why they were still beholden to these literally extinct laws of life.

Sterling K. Brown could flutter his eyelashes and convey a metric ton of emotional weight — the man is an actor through and through. Duplass is a filmmaker at his core. Though Eslyn did the bulk of the heavy directorial lifting, you could see Duplass’s influence — especially in the script he co-wrote with Eslyn. The timing is impeccable, and the chemistry built between Duplass and Brown is instantly recognizable and relatable.

Biosphere is a wonderful film that should spark a lot of conversation. They are still in the process of receiving the distribution, but keep an eye out for it to come to a screen near you.