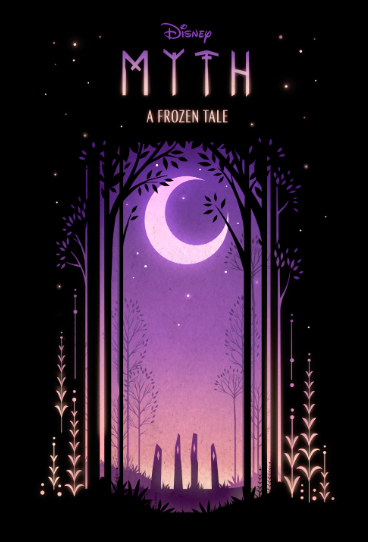 The film focuses on a family gathering for an evening of bedtime stories. The story told showcases the Nokk, a water spirit in the form of a stallion; Gale, the playful wind spirit; Earth Giants, the massive rock formed creatures; and the Fire Spirit, who is a fast-moving mercurial salamander named Bruni. These spirits come to life in a colorful and entrancing spectacle. The film is narrated by Evan Rachel Wood who voiced Queen Iduna in Frozen 2. The short was originally screened in virtual reality as part of the Frozen 2 press activities. Since then, it screened at the 2020 Sundance Film Festival and was made available via Oculus VR. Myth: A Frozen Tale will have its debut in 2D on Disney+ February 26.

There is a harmony and uplifting spirituality in Myth: A Frozen Tale that comes through with each element represented. The emotional arc of the film is centered around the idea of coming together. The family comes together to listen to a story, and the elements come together to make something beautiful. There is a nice balance between story, color, and sound that gives a nice nod to the dynamic world of Frozen. Everything is so precise. The aesthetic of Frozen is spot on. It’s nice to be immersed in Arendelle again.

BGN got a chance to join a special virtual presentation for the animated short film. Moderated by the film’s producer Nicholas Russell (Short Circuit), the participating speakers were director Jeff Gipson and production designer Brittney Lee (visual development artist for Frozen 2). Here are our top 10 takeaways from the animation event.

Jeff Gipson: I love bedtime stories; when you go to sleep and your parents tell you a story, your mind just wanders. There’s this one story that my dad would tell me growing up, and I just remember the way that story made me feel. The sense of wonder, this legendary Western figure interacting with my family and some level, and it just was really inspiring. So when it came to Myth, I started thinking about what types of bedtime stories would you be told if you grew up in or around Arendelle.

Brittany Lee: One big influence for the Frozen world is the art of Eyvind Earle. His work on Sleeping Beauty was informative, with an elegant shape language that was very graphic and stylized. The forests are featured predominantly in Sleeping Beauty as well, so we looked to his artwork to sort of begin the framework of stylizing the space, pulling the shape language we could build from to build our forest in Myth.

Mary Blair is one of my personal heroes and a huge inspiration. I think, more so in color. The shape language was definitely more based on Eyvind Earle, the long, elegant, and etherealness of that. But colorwise, pushing into less realism or fantasy? Absolutely Mary Blair.

Gipson: Looking at films like Fantasia, the pink elephant’s sequence in Dumbo, Make Mine Music, Peter and the Wolf, I just loved how the animation was married to that music. It almost moves exactly with that music. Fantasia is almost one of the very first music videos where you’ve got some of the pieces that are abstract and others use characters. There’s also something amazing about how even back 80 years ago, Walt and his animators were pushing on technology, pushing on art styles, and trying to create something fresh and new. Even today we all reference back to segments from that film. We want to see that on-screen again.

Lee: I’ve always loved music and visuals working together in harmony and in any form. I think Fantasia was maybe our first real pass, and it’s so emotional and inspiring, and there’s freedom to it too. You wholeheartedly submit to the music and see the visual representation of what music can be. I find that incredibly inspiring. I think there’s something that is just universal. We all love listening to music and creating things to music too.

Gipson: We really leaned into the diamonds. It’s in the water splashes, it’s in the fire embers, it’s in everything! The cliffs…just really integrating it.

Lee: One of the other things that we knew we needed to do was build our language for the elemental spirits. We stayed with this sort of jewel-tone palette that exists in the Frozen world, and we just expanded it a little bit further. We also were adding the fifth spirit, and we wanted that to be representative of all the elements combined so we gave it a prismatic effect and thought that might be a nice way to show how when everything works together there in this beautiful combination.

We pushed hard on that palette, giving each one of the spirits their own aesthetic and stylization, graphically implementing a shape language into each of them that may not be as obvious in the film. For Myth, diamonds were stylistic elements that we pushed in each of them. As you watch the film, you can see diamonds in each of the characters. The diamond shape language originated in Frozen 2. That’s sort of how Elsa’s shape language evolved. Because Elsa is a bit of a representation of the fifth spirit in Frozen 2, we wanted to have a nod, but not too overtly be pointing to her particular character in this film.

Gipson: I remember Joe [Trapanese] showing Nick [Russell] and me video of one of the percussionists using rocks and earth and things to make the drum beats for the section of the Earth Giants score. So there are cool little fun things like that. I think even in the fire salamander portion, there are flames and there are fire sounds he was using as well.

Gipson: In the VR version, we have the Gomez effect, where if you’re not looking in the right spot the music tones down and the color starts to desaturate. The world starts to get dark. Our amazing lead of technology, Jose Gomez, worked on Cycles, as well as Myth. This was a technique we developed on Cycles to use, and it just felt like we wanted to use this on Myth. It again really informed and helped create that streaming version for Disney+.

Gipson: I think another challenge was that a lot of the crew had never worked in a real-time engine before. I think that speaks loudly about the amazing artists, technicians, and people who we work with at the studio who jump into a new software package, learn it within, I don’t know, two or three weeks, and then can execute Disney Animation-quality works in such a short time frame. It’s incredible. It’s a nod to the amazing people we work with.

Gipson: I was inspired by the graphic look of shadow puppets and pop-up books and imagined a world where you were able to step into a kind of pop-up book.

Lee: One of our initial problems to solve was how do you make an immersive forest also feel like a pop-up book? One of the things that we decided early on was that we wanted this backlit feeling so that the space around you, the space closest to the viewer, was all going to be in shadow. It can have this dramatic silhouetted effect, and then everything looking out from beyond the space would be lit and would be like a stage.

Nicholas Russell: I am also happy to be called the head cheerleader of our hundred-strong crew that helped us make the film.

Gipson: Nick mentioned there were almost 100 artists who worked on this, and this was our team’s second film made in real-time at the studio. There were so many technical challenges but also artistic challenges we overcame. It’s similar to our film. The film is about harmony and what happens within harmony. All of our artists, our technicians, our production folks came to create something really special.

Gipson: I love her personal work; she does this paper cut-out, really graphic, really stylized art, right in the wheelhouse of what I was hoping. I think we leaned on trying to think about the practical way these would be made. You know thinking about the stylization of Brittney’s paper cut-out work that we’re referencing and leaning into it.