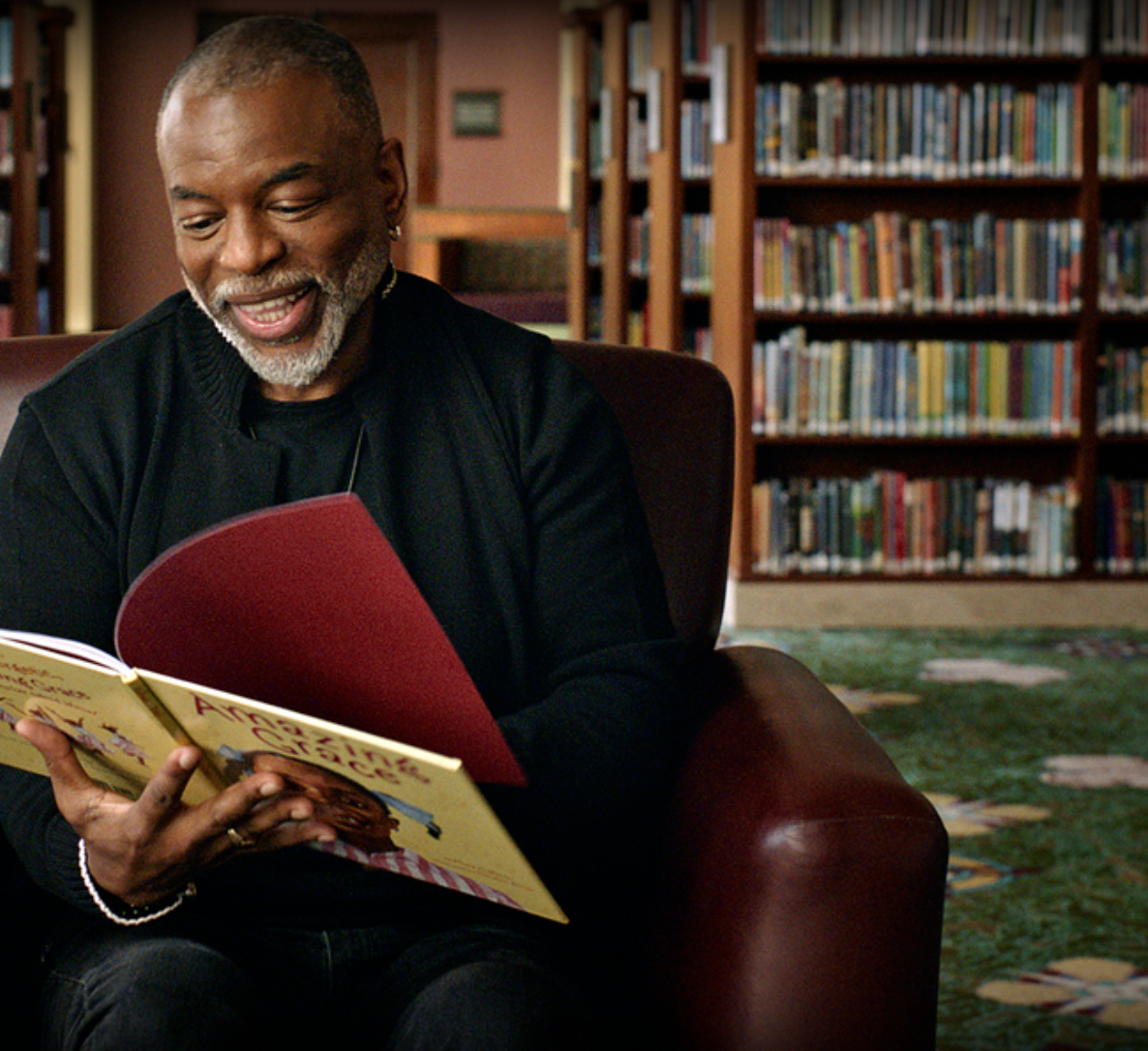 The highly anticipated documentary Butterfly in the Sky opens on a shot of present day LeVar Burton, sitting in a chair looking through a children’s book. The book is Amazing Grace by Mary Hoffman, and it features a young Black girl on the cover, hair in pigtails, missing her two front teeth, and wearing a smile full of joy and glee.

Instantly I’m transported back to my childhood. I’m sitting on the floor in front of the TV, far too close, eating a bowl of cereal and waiting for that ubiquitous song to come on. “Butterfly in the sky, I can fly twice as high. Take a look, it’s in a book, A Reading Rainbow.” Children’s programming at the time was a special thing. Everyone watched Reading Rainbow, and every child knew exactly who host LeVar Burton was.

When you get to the age where you realize that the people in the TV are actual people doing their jobs, it can be pretty jarring. But for a show that was on for more than 23 years, a show that was passed down to younger siblings, nieces, nephews, maybe even our own children, Burton became more than just a host. He became family. He would go on to influence other parts of our childhood. Whether it was the requisite watching of Roots in fifth grade or enjoying him as Geordi La Forge on Star Trek: The Next Generation, Burton was and still remains a comforting presence. He even has LeVar Burton Reads, which is touted as Reading Rainbow for adults.

There’s something that is equal parts cathartic and arresting as Burton reads from Amazing Grace and then the doc shows Burton reading it on the show nearly 40 years ago. If you’re familiar with the show, there was always a section where a kid would review a book. As kids, my friends and I wanted so badly to be one of those kids. To have someone our age recommend a book to read that was for us? It was out of this world!

Butterfly in the Sky catches up with many of the reviewers as they recall their time on the show. It’s a diverse group. One reviewer notes that Reading Rainbow was a show that everyone wanted to be on because it was so easy to see yourself. The show gave you a chance to define yourself within a piece of literature — to search for yourself on the page and maybe even create the pages yourself.

Butterfly in the Sky has a bevy of producers and directors, including big names like Whoopi Goldberg. There’s so much love and nostalgia and passion put into the doc that serves as overflow from time worked on the show. Created by former teacher, Tyla Liggett, the show was produced and hosted by LeVar Burton from 1983–2006.

Watching the documentary is a dream for anyone who was even slightly touched by Reading Rainbow. Children’s author Jason Reynolds — a large Black man with dreads — put into perspective what it was about Reading Rainbow and LeVar Burton in particular. “For all of us watching it, it was the show saying you matter, your stories matter, your voice matters, your opinion matters. Which means I get to watch the show and say, huh, maybe I have a voice? Maybe I have an opinion, a story.”

Butterfly in the Sky takes a long look at the history of Reading Rainbow: the risks, the pitfalls and the successes. The best of the successes are the impact the show had on children. Books sales rose over 800% since the show’s debut. Generations of children have been positively affected by Reading Rainbow, a show that wasn’t afraid to educate and empower children.

If there are any faults to be had with the doc, it comes in a lack of knowing exactly who or what the doc’s main subject is. This may be entirely by design. Reading Rainbow is LeVar Burton and LeVar Burton is Reading Rainbow. The show is a young man with dreams who searches for help and understanding to make those dreams come true. Burton’s journey is just as important to the show’s development as the show is itself. This is not completely unexpected when you’ve not only hosted a show for 20+ years but also carried on a career around it, doing whatever it took to make sure the helm was well maintained. It remains his most cherished credit even as he takes on new roles.

Butterfly in the Sky truly is a beautifully done documentary full of truth and the kind of direct-to-camera soul soothing that Burton is known for. Make sure to have your tissues ready. Sections showing the former kids who are now adults are very special. And hearing what the production crew has been up to recently is inspiring. The impact of Reading Rainbow is remembered and celebrated. But you don’t have to take my word for it!

Butterfly in the Sky had its premiere at the 2022 Tribeca Film Festival.

Tribeca 2022 Review: ‘The Beauty of Blackness’ Fashion Fair Documentary Embraces Getting a Seat at the Table

Tribeca 2022 Review: Letitia Wright Stars in ‘Aisha,’ a Poignant Tale of an African Woman’s Quest for Asylum in Ireland