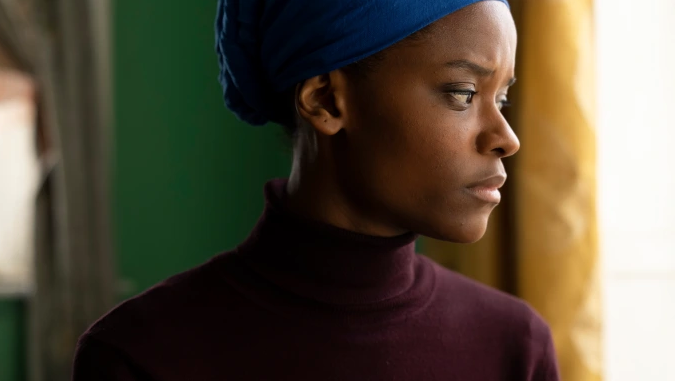 Irish writer-director Frank Berry (Michael Inside) is known for producing socially conscious films and sparked some controversy on Twitter when word got out that a film was being made about Ireland’s system to grant asylum to refugees. Twitter needs to calm down and wait to view a film before calling for the work to be canceled. Aisha was written and directed by a white Irish man, and there is not one white savior in the entire film. Instead, what Aisha does extremely well is authentically reflect how xenophobia and racism work side by side in Western countries to keep Black and Brown refugees who fear for their lives in their own counties living in a state of cruel limbo.

Aisha is a vibrant talented young woman from Nigeria, who, due to unfortunate circumstances, is on her own seeking asylum in Ireland. This film is all about the silences. Berry’s script has a stunning economy of dialogue so when people in this film speak, they have something meaningful to say.

I love it when I’m watching a film and I totally believe every single person I experience on screen. Time melted away and for 94 minutes I was completely enthralled in the world of this film. The film doesn’t feel like a film at all. I felt like I was a fly on the wall watching these compelling people live through this merciless process.

Letitia Wright (Black Panther) plays the title role brilliantly. Her eyes tell the story beyond words that leave the audience completely on her side rooting for her in every frame. I’ve only seen Josh O’Connor (The Crown) playing British royalty or a member of the English upper class, but here he plays Connor, an ex-con who lives with his mum and just got a job as a security guard at the facility where Aisha has been assigned. O’Connor disappears into Connor with a bit of facial stubble and a slightly hunched posture that reflects a young man who has already experienced the weight of existing in the lower middle class.

The tragedy of Aisha is the reality reflected on screen. In Ireland, refugees can seek asylum but the process is difficult, tedious, and downright degrading. Even still, the American process is worse.

Years ago I was in a volunteer program where we visited a federal facility in Elizabeth, New Jersey, that housed people seeking asylum in the United States. The facility was basically a prison for innocent refugees. These are people were refugees because of political issues and life-threatening violent situations. The woman I visited was seeking asylum for herself and her young daughter from female genital mutilation. It was 1997 when I first visited her. I had to stop volunteering in 1998, and the woman was still living in limbo in this prison-like facility that was freezing cold all year round.

At least in Ireland, the facilities are in single-room occupancy buildings, former dormitories, hotels, or trailer parks, where people can wear their own clothes. But as the film reflects, the refugees have very little agency. Some aren’t allowed to work. Refugees that are allowed to have work permits must depend on public transportation and some of the housing spaces aren’t close to town centers, so it’s either too far to get to work or they have to risk being late and dealing with the negative consequences from their employers.

And, just as refugees are able to bond and form community with one another in these facilities, people are randomly moved or their case is rejected and they are sent back to their own countries without warning. You could be living in a space for years waiting for your case to be tried and decided, and in an instant you could be sent back to the country you’re running from.

There are no white saviors in this film. The bureaucracy of the process is excruciating. So much is required of Aisha just to prove that she is worthy of being accepted into a country in order to live. The refugees in Aisha are all people of color. Many are women from countries on the African continent who face being forced into sex work or death for themselves or their children if they return to their own countries.

The script doesn’t whitewash any aspect of the racial dynamics reflected in this film. Berry skillfully displays the various attitudes of the native-born Irish folk in the film that range from blatant racism to microaggressions, to well-intentioned but futile attempts of allyship that every Black person living in a majority white culture experiences.

Aisha fights to retain her dignity over and over again and is forced to deal with the negative consequences that Black women face when we speak up. Aisha has strength beyond words, but we meet her just as she faces the biggest challenges on her journey.

Witnessing Aisha navigate her way through this system reminded me of how low-wealth folks must always work and go the extra mile to advocate for themselves in adversarial social service systems. Social systems should be structured to support people who need them the most, but oftentimes, the bureaucracy is intact to encourage people to go back to their own countries, especially if you’re Black.

The pacing of Aisha takes its time but the film doesn’t drag, instead, the silences intensify the urgency of Aisha’s situation and are perfect for this film. Every moment of Aisha has meaning and yes there are moments of humor, sweetness and love woven throughout the story that make it feel even more lifelike.

After watching an early screening of the film I had to take a walk by the Hudson river to process what I saw. Aisha made me think about the privilege and responsibility of being a girl child born into citizenship in a country where, for now, we have rights and safety that so many parts of the world do not possess. The most insidious part of racism is that it appears globally at all socio-economic levels, but those who have the least amount of wealth are the most vulnerable, which is horrifying.

Aisha is a powerful work of art that deepened my level of empathy for refugees, particularly women who right now are fighting to survive and begging safe-space countries all over the world to just let them in to live.