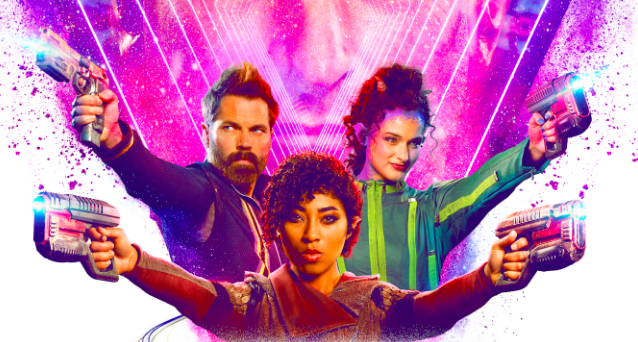 Calling all sci-fi lovers! We are in danger of losing the battle of color and imagination.

Who is ready to watch a campy new series, here just in time to save the day? A main character who kicks ass on screen has come to answer the call. Adriyan Rae has landed the lead as Elida in the Syfy’s live-action Vault Comics adaptation, Vagrant Queen. The series is produced by Blue Ice Pictures and boasts an all-female team of writers and director. This show frames female empowerment, sexuality, and loyalty above all else in a universe filled with uncertainty.

The first episode of Vagrant Queen, as with many other shows, has a few areas that could be fine tuned. A few scenes seem a little forced, and some of the acting is a little clumsy. However, it does contain a lot of imagination, colors, and sentimental scenes that redeem this show overall. The plot brings a few unlikely characters together in an all-out space adventure. This odd trio has the right amount of silly, determination, and smarts to get them out of the tightest situations.

Rae’s character pushes the narrative forward. Among the show’s fun and adventurous twists, it unapologetically demands more inclusivity than other space adventure shows. The entertaining series blends equal parts Guardians of the Galaxy, Star Wars, and Star Trek: The Original Series, with more neon colors. This brightly colored space adventure has a more of a female sensibility than any other of its kind, and it has the potential to be more.

The showrunner for Vagrant Queen is Jem Garrard. Danishka Esterhazy, as a director, has an eye for a narrative that depicts honestly what women find most interesting. Her works have been featured on Bravo, CBC, Super Channel, and Movie Central. Her list of awards includes Best Feature Drama award at Vancouver’s Women in Film Festival, Best Canadian Feature award at Toronto’s Female Eye Film Festival, and winner of the inaugural Amazon Video Filmmaker Award at Sundance (2017). She brings her vision, creativity, and innovation to the production of Vagrant Queen. Only time will tell if these worlds, storylines, and characters are complex enough to keep us engaged. I know at least four characters who are managing to do just that.

The cast of Vagrant Queen is top notch with my own personal favorite added to the mix. To start off, the titular Vagrant Queen Elida, who is of royal blood, is on a mission to save her mother before she is caught by her enemy Lazaro. Being alone for a long time and with the hard words her mother spoke to her before they parted, “Trust no one but yourself,” Elida joins forces with someone who has betrayed her in the past.

Tim Rozon plays Isaac, the a tall, dark, and handsome type. His character is lawyer turned space rogue. Rozon is probably known for his role as Mutt in the hit series Schitt’s Creek. His soft beard will captivate all who see him perform. Isaac, the man who betrayed Elida in the past, has returned to help her. Rozon’s performance, as with everything he is in, is marvelous. When he sells someone out for his own benefit, you truly believe he is that kind of guy — but you want to give him a hug anyway.

Alex McGregor is a South African-born actor who plays Amae in this series. Little is known about Amae’s origins, but we do know that she has a happy-go-lucky personality and a brother who is a bartender on the station. Apart from her personality, which shines brighter than the neon colors, is her sexual orientation. This science fiction show continues the trend of being inclusive to the gay community. Amae’s tech-savviness comes in handy when they need some overdue repairs on their clunky ship. Her brilliant mind comes at exactly the right moment to balance out the other two characters’ seriousness and goofiness.

And finally, Paul du Toit, accomplished South African actor in film, television, and theater, plays Lazaro. He is probably goofier than he has to be for a villain, but that is just another way this show stands out from other science fiction space adventure series. He is on a mission to track down and destroy the royal line. He has of course, been at this for a long time, and has yet to capture Elida. Will he ever? Let’s find out together, shall we?

This series still has to find its footing, but if it does, it can really go far. Outside of the beautiful shades of neon and the imaginative worlds and characters, the show has potential to build its very own lore. The combination of serious, humor, and tragedy might be enough to bring audiences to this production. While the first episode did not blow me away, I am excited to see where these characters end up. I will sit back and see how their ten-episode series develops.