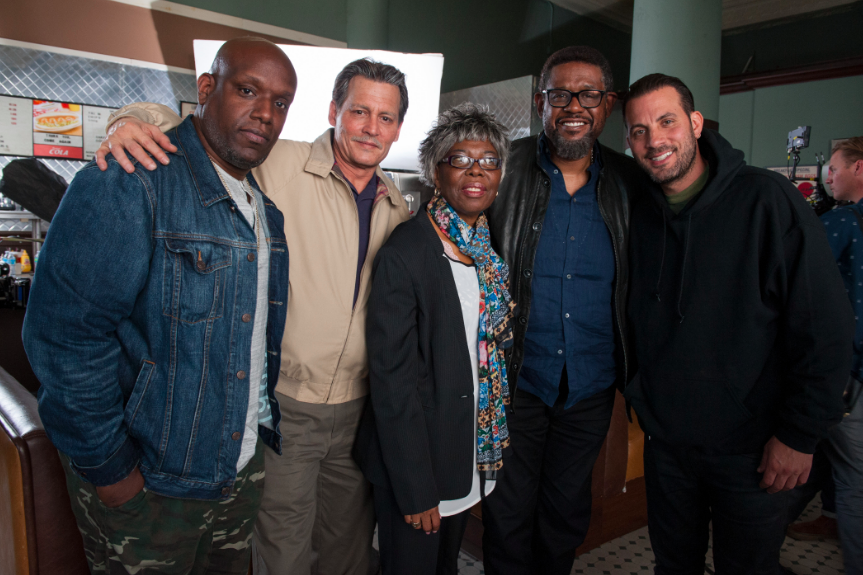 Voletta Wallace lost her beloved son long before she was ready. Despite being known globally as an artist and a star, he was her baby boy. In the aftermath of his passing, his undeniable handprint remains on the world. She works to make sure his legacy is maintained and shown the dignity he deserves with that impact.

The unsolved murder of Brooklyn-born rapper Christopher Wallace, aka The Notorious B.I.G., continues to be the subject of everything from novels to films to search engine conspiracy theories. Despite the years-long outpouring of interest, the crime remains unsolved.

Though it’s been 24 years since Wallace’s passing, requests for permission to use his likeness and music for projects continue. At the helm of that approval process is Wallace’s mother, Voletta, working diligently to preserve the legacy of B.I.G. Among the countless films that cross her desk, there is the rare project that captures her attention.

City of Lies, based on the book Labyrinth by Pulitzer Prize-winning author Randall Sullivan, is one of those projects. Speaking to Black Girl Nerds, Wallace says she gave her approval to the City of Lies production company not because it was hoping to champion his music but instead because it wanted to center the story on the widespread corruption surrounding the investigation of her son’s murder.

“This young man [from City of Lies] called and told me that they’re doing this project. There were so many projects going on,” says Wallace. “I’m tired of them, some of them. He said he would like to meet me. So I decided to meet him. When he told me that it was a ‘Russell’ story and wanted to bring out the truth about my son’s case, I decided, Okay, I’ll do this for Russell. I’ll do this for Russell’s family.”

Differing from other retellings of the investigation surrounding B.I.G’s death, City of Lies centers on LAPD detective Russell Poole (Johnny Depp). Poole spent nearly 20 years trying to solve the murder. Jack Jackson (Oscar and Primetime Emmy winner Forest Whitaker), a journalist, teams up with Poole in search of the elusive truth. Together they explore why the case remains cold — and why a secret division of the LAPD is seemingly set on keeping it that way.

In the immediate months following B.I.G.’s death, Wallace and Poole forged a relationship of sorts. Both equally committed to finding her son’s killer, their common goal gave Voletta hopes for justice. Unfortunately for both the Wallace and Poole families, that goal has yet to happen. Wallace remains convinced the LAPD conspired to keep her son’s murder unsolved, and Poole went to his grave, never seeing the fruits of his labor realized. Though resolution often seems unattainable, Voletta remains hopeful for justice. Those responsible for suppressing the investigation will also face the consequences of their actions.

“I have strong hope that I don’t care that it takes 40 years for the truth just for somebody to be accountable for what they did,” Wallace says. “Those in high positions try to put the case on the shelf and not let the truth come out. [They do not want] to expose these police officers for the crooks that they are. You know, all they wanted was to do was to save their retirement. They didn’t want to ruffle their feathers; they didn’t want people from the East Coast to come over. They did everything they could under the real investigation [to put it] on the shelf. They moved on with their life, and I know they can’t sleep at night. I hope and pray that the truth would expose them individually. Russell died exposing them; he was a man of his word. His wife said he died of a broken heart because he didn’t see justice. All he saw was corruption or corruption — pure lies. Everything was hidden.”

As her son’s memory lives on, Wallace finds solace these days in her garden. While the world celebrates the accomplishments of a man whose humble beginnings transformed into worldwide phenomena on the day of his passing, she instead forgets the day altogether. She appreciates the love and celebrations from across the globe but still finds it painful.

“I have my son all over my house,” she says. “So I look at it and reminisce my private way. He is not here, and that is bad. I cannot commemorate death, and I commemorate a life. The fans who are doing it know why they are doing it. I don’t criticize them for what they’re doing. It’s just their way of showing their love for my son. I appreciate them for that. To be honest with you, [this] March 9th, I went and got my first COVID shot. Sometimes over the years, I forget the day. I do. Because guess what? He’s here with me.

City of Lies is available on digital and on demand.