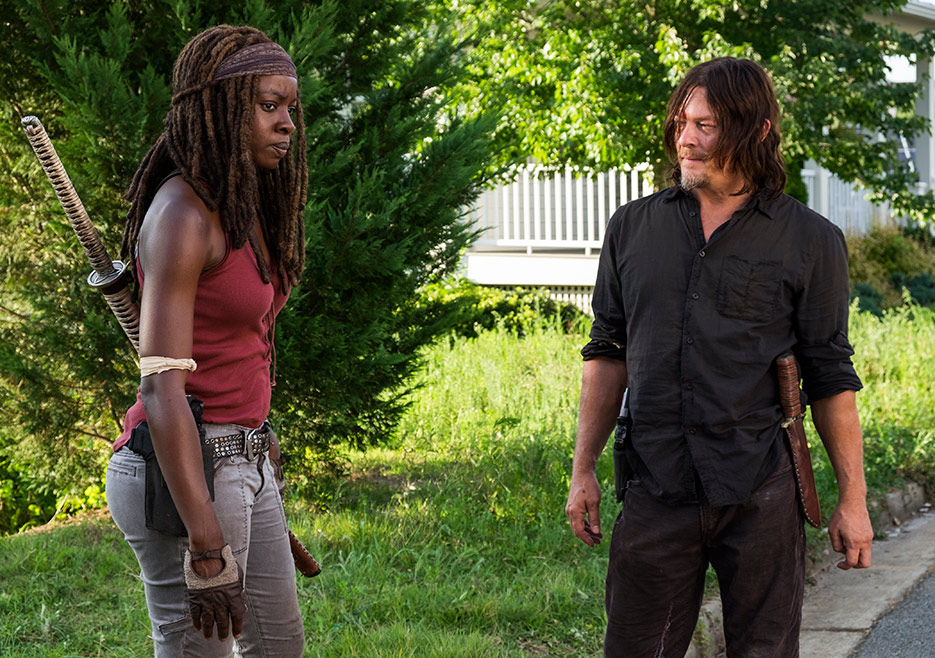 In the previous The Walking Dead episode “The King, The Widow and Rick“, everyone in Team Fam had broken off from the original plan and started doing their own thing. Michonne and Rosita left Alexandria because Michonne had a gut feeling; Daryl and Tara decided that they needed to handle the saviors; and Maggie placed the captured saviors in an enclosure within the walls of Hilltop. By the end I was confused, exasperated, and quite honestly just a tad bit—ok quite a bit—peeved, and honestly this episode did nothing to change my feelings.

If anything, I’m pissed—let me explain why.

Eugene. Just kidding. (But no really, why is Eugene still alive?) I’ll get into my feelings regarding the pizza burn on the roof of The Walking Dead‘s mouth that is Eugene another time. For now, let’s mosey on into the episode.

“Time For After” opens with Jadis letting Rick out of the shipping container he’s being held in, and he tells her she has the choice to help them or die in the war. As he’s standing there in the middle of her junk haven, Jadis takes pictures of him with one of those old time cameras, the kind with the giant light bulb and reflector, while her second in command draws in a sketch book. Rick asks why she’s taking pictures and she says for “Sculpture, after”. *Sighs in lawd give me strength* At this point I knew this episode was not only going to annoy me, but piss me off.

Next we see Eugene sitting in his room making notes in a book; he looks at his chess board before going to Dwight’s room. Before Dwight can say a word, Eugene in his garbled, monotone manner proceeds to deliver an ultimatum to Dwight: that if Dwight stops helping Rick, he won’t tattle to Negan. Dwight tells him that the saviors are finished and it’s time for Negan to be removed. Eugene, like a true drone spouts the same nonsense Negan told Gregory: that his being there saves a lot of people. Oh really Eugene?! Who is being saved while your cowardly, sniveling behind shuffles along to Negan’s command? Boy please!

Michonne, Rosita, Daryl, and Tara are discussing their next move in attacking the Sanctuary. Michonne suggests that she and Tara cover Daryl while he crashes the dump truck through the entrance, to make way for the walkers. Rosita questions the group, saying that they’re going against the plan. When Tara tries to change her mind, Rosita says they’ve lost too much. She regrets that it took Sasha dying to see that and she believes in Rick, so she’s going to wait and trust in the plan. Before she leaves, Rosita asks Michonne if she’s sure about what they’re planning to do and Michonne says she has to see it through.

After a truly cringe-worthy conversation between Eugene and Negan, Eugene decides he has to find a way to get rid of the walkers. He goes to the basement and takes Sasha’s music player from the coffin she died in. Out on the roof, just before Eugene is about to launch a homemade battery-powered model plane, Dwight arrives. He tries to change Eugene’s mind, and tells him the only person who has to die is Negan. Eugene responds with a lot of words that sound like gibberish and launches the plane; music starts to play from the MP3. This douche has the nerve to talk about loyalty when he’s using Sasha’s property to do Negan’s bidding.

I found this to be not only the final nail in Eugene’s coffin of possible redemption, but highly insulting to how and why Sasha died.

Back in Jadis’ trash dump, Rick is released from the container for a second time. He once again has to fight a walker, this time instead of having spikes going through its body, it has a helmet similar to Sauron’s from Lord of The Rings. After defeating the wraith walker, Rick gets all the way fed up and lets Jadis know he’s over the bs, either she and her people fight with him, or they die. My dude gathers his clothes and leads the Trash Pail Kids to the Sanctuary. When he sees the dump truck sitting halfway through the entrance, the courtyard devoid of walkers, I cussed Daryl and Tara clean out.

Y’all when I say I was angry, I mean livid, shaking-with-rage angry. You’re probably asking why am I getting so worked up over a fictional show, that it ain’t that deep. Half of my anger is because while Rick is fighting walkers half naked, Daryl and Tara have made it all for fricking naught. Everyone in Alexandria, The Kingdom, and Hilltop agreed to a specific plan, and in less than a dang day those two twits have ruined EVERYTHING.

Season eight is literally seasons six and seven all over again. Last season, we saw Michonne going off on her own, trying to get to Negan to kill him. She carjacked one of the Saviors and was almost at the Sanctuary by time she realized that what she was doing was reckless, that the war couldn’t be won by just one person. She needed Rick and the family to win; that’s why she told him that she would always be there, she would always back him up and would never doubt him again. But here we are, in the trash fire that is season eight and the same nonsense is being repeated. Heck, the scenes are practically identical, because Michonne comes to her senses when she’s in the truck with Daryl, she changes her mind and heads back home. If this ain’t lazy writing I don’t know what is.

Michonne has ALWAYS been the more level headed of the group. Last season she was reeling from the loss of Glenn and Abraham, but she learned to channel that pain from potentially destructive behavior. One of her most famous lines is “Being angry makes you stupid, and stupid gets you killed”, and if there’s one thing about Michonne I know, is that she isn’t stupid.

Daryl has done this over and over again: he’s made rash decisions that create a ripple effect, causing devastating loss of life. I am sick and tired of him and his foolishness. We know from the promos (episode 8 mid-season finale) that Negan and crew made it out and to Alexandria, and once again everyone is in danger and I have a feeling that Morgan and Carl are going to die.

For the last few seasons Daryl is the ONE character who has not grown emotionally, if anything he has devolved. When TWD first started, Daryl was a little standoffish, but as the seasons went on he opened up to not only Beth, but Rick, Glenn, and most notably Carol. He became more talkative, and even after Beth died, he didn’t completely close himself off. But once he entered the gates of Alexandria, he changed into this dirty, grunting, cranky person who, to me, sucks the life from whatever scene he’s in. It can be argued that this may have been because he was finding it difficult to adjust to life in a “normal” environment, as he had grown used to living in the open.

But when this season started, I thought Daryl had made a change for the better. Yes he may not have been speaking that much, but he was with Rick, he was with the plan, but with one episode it all disappeared. Note: I’m not blaming the actor, I’m laying this all at the writer’s pen. They have written Daryl into a corner, where he’s stuck and serves no purpose other than to mess things up for everyone around him, and at this point I don’t know how Rick—or I—can trust him again.

Regarding how this season is going, I’m becoming discouraged that it will improve. If Carl dies because of what Daryl and Tara have done, it will destroy Michonne and Rick (heck, that’s probably why Rick’s hair is so white in the flash-forward). Once again, Rick and Michonne are faced with the possible loss of a child and it angers me. I know everything on The Walking Dead can’t be sunshine and rainbows all of the time, but I’m getting to the point where I feel as though the writers hate Rick and enjoy seeing him miserable and in pain. As a viewer and someone who’s loved this show from the beginning, my love and excitement diminishes a bit with each episode this season, and that truly breaks my heart.

I apologize if this review was a little longer than normal, but I needed to get this off my chest.

The Walking Dead airs every Sunday on AMC at 9/8c. Here’s a sneak peak for tonight’s episode “How It’s Gotta Be”.