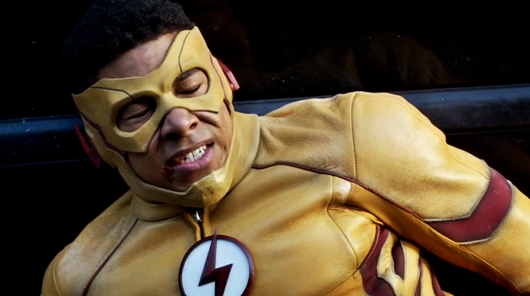 This episode of The Flash required lots and lots of Kleenex. Between Joe West, Iris West, Jesse Quick, and Wally West all shedding tears, the narrative of The Flash took a decidedly dark turn this episode. Sure, we knew it was coming, with Savitar showing himself last episode and Barry and the team trying to save Iris from a future timeline they just can’t seem to change. But dang! This episode is both frustrating and depressing! Here’s what happened in “The Wrath of Savitar.”

The episode opens with the Central City sign getting updated with Wally’s moniker “Kid Flash.” Barry, Wally, and Jesse spend the first few minutes of the episode training, and Wally beats his time and is fast enough to save Iris. Yay!

Barry and Iris call the Team together at Star Labs and they announce that they are engaged! Barry asks Cisco to be his best man and Cisco hints that he wants to bring Gypsy as his plus one (Yes!). Everyone is happy for the couple, though Joe West looks shook and starts crying and hugging Barry and Iris. While everyone is congratulating Iris, Joe pulls Barry to the side and it’s revealed that Barry hadn’t given him a heads up on his marriage proposal. Joe is disappointed that Barry didn’t ask for his permission. Barry reveals that it was a spur of the moment proposal and their conversation is disrupted when Wally alerts everyone that there is three-alarm fire in Central City.

Barry and Wally race off to deal with the fire, which should be a straight forward mission, except Wally sees Savitar! Savitar starts putting Wally through the wringer, and Barry watches confused as all he sees is Wally fighting the air. Well, it turns out that Wally is having Savitar visions and hallucinations; a fact that he’s kept secret from the team.

Barry is angry that Wally didn’t inform the team, especially with the whole situation with Iris. Afraid that Wally is somehow being controlled by Savitar, Barry kicks him off the Save Iris West Mission and Wally storms off upset and confused. While Wally goes off to mope, Barry pressures Julian into channeling Savitar to make sure that the evil speedster is still trapped in the Speed Force. He is still trapped but boasts that he will soon be freed. The team scrambles to figure out how Savitar can possibly escape the confines of the Speed Force and, after first confessing to Julian, Caitlin informs everyone that she kept a bit of the Philosopher’s Stone in hopes that it would cure her of Killer Frost. Savitar’s prophecies are slowly coming true and Caitlin is the betrayer that Savitar spoke several episodes back.

Wally, in the meantime, feels helpless about Iris and insists that Cisco vibe him to the future to see her death. Wally wants to know everything about his sister’s death so that he can save her. When he goes to the future, he is heartbroken by his sister’s violent murder, but notices that she isn’t wearing her engagement ring when she is murdered.

Wally, who is already emotional because he is scared of falling under Savitar’s control, confronts Barry in front of the whole team. Apparently, Barry only asked Iris to marry him in an attempt to change the future timeline. Iris does not take this well and starts contemplating whether or not she wants to marry Barry. Ugh! Not this “will they or won’t they” stuff again.

After a few more vibes to the future, Barry figures out that Savitar has always been trapped in the Speed Force and that when he threw the Philosopher’s Stone into the Speed Force during the beginning of the season, he actually gave Savitar what he needed to escape. Now all Savitar needs is the bit of stone taken by Caitlin, which is safely tucked away at Star Labs.

This episode should have ended with Star Labs destroying Caitlin’s piece of the stone so that Savitar would remain in the Speed Force forever. However, there are Wally’s Savitar visions to contend with. During these visions, Savitar taunts Wally, telling him that he won’t be able to save Iris and he will never be fast enough. Wally, frustrated and terrified for Iris, makes the epic mistake of taking the bit of the Philosopher’s Stone and opens a breach to the Speed Force. He mistakenly believes that if he throws the last bit of stone into the Speed Force, Savitar will forever be trapped there. Man! If only Barry had kept Wally on the team, he would have known the truth, but you know…

Anyway, Wally opens a breach to the Speed Force, throws in the stone, and is sucked into the breach to everyone’s horror. Not long after, Savitar comes through and smugly lets Barry know that this was his plan the entire time; to use Wally to get the last bit of stone and to take his place in Speed Force hell! Savitar then beats Barry up and Barry spends the conclusion of the episode crying, healing, and feeling depressed in Caitlin Snow’s medical lab. Iris West, heartbroken at what happened to her brother, leaves Barry to comfort her father and is shown without her engagement ring (hope you had your Kleenex ready, because tears, tears, and tears). Everything is just messed up, ya’ll.

The Wests just can’t catch a break and the conclusion of this episode felt just as depressing as some of the earlier Zoom episodes. Also, the whole thing with Iris was bothersome. Though it is understandable that she doesn’t want to be a victim, it’s frustrating to see her do so little to save herself. Anyway, by the end of “The Wrath of Savitar,” everyone is shedding tears over Wally West, who met a fate worse than death. Damned Savitar and his prophecies!

Catch The Flash on The CW on Tuesday 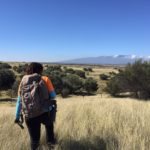