If you like Preacher, but wished there were more gunfights and prostitutes, then Damnation may be the show for you. Damnation is on USA and comes on Tuesdays at 10/9c. What I like about Damnation is that you really don’t know what to suspect. Within the first ten minutes of episode one, there is a murder — and the violence doesn’t stop there. Here are three reasons why you should watch Damnation.

One thing I like about Damnation is that I have no idea what’s going on, but in a good way. It’s like Westworld where you think you have the character motivations figured out and then you find out they’re a robot. In the first episode alone, we have several murders, a female assassin, and a trip to a whorehouse. In the second episode, there’s a visit from the Black Legion (According to Wikipedia, The Black Legion was a secret vigilante terrorist group and a white supremacist organization in the Midwestern United States that splintered from the Ku Klux Klan and operated during the Great Depression of the 1930s.) Even though Damnation is historical fiction set in the 1930s during the Great Depression, there’s still a mystery surrounding the show that makes me want to tune in every week. 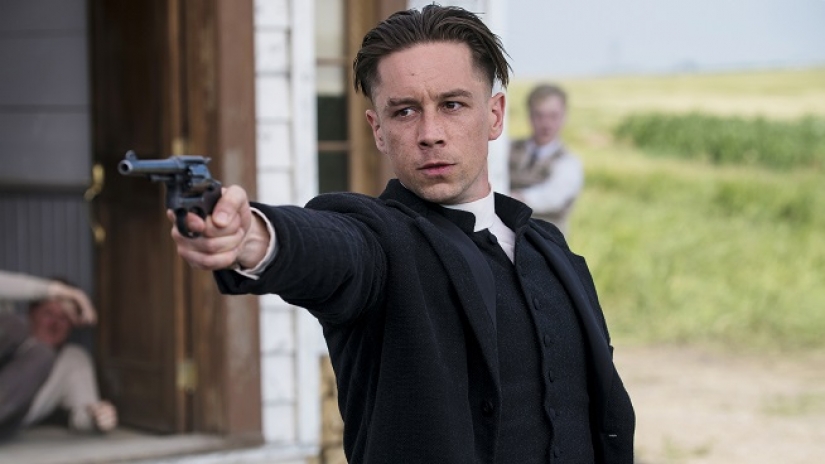 The other thing about Damnation that I enjoy is that there is no clear-cut bad or good guy. Your sympathies move back and forth between the preacher Seth Davenport (Killian Scott of Love/Hate) and the cowboy Creeley Turner (Logan Marshall-Green of Quarry). Even the assassin Connie Nunn (Melissa Page Hamilton of Mad Men) is sympathetic when she rescues an orphan girl, the fact that she orphaned the girl doesn’t matter.

The reason why I became interested in the show was one Bessie Louvin played by Chasten Harmon in her first major role. I’m always on the lookout for strong female characters and I’ve definitely found it in Bessie. Although she is a prostitute, Bessie can read and isn’t afraid to stand up for herself if need be. She certainly keeps Creeley on his toes and the way that he insists everybody put some respeck on Bessie’s name makes my little shipper heart soar.

I am looking forward to what Damnation has in store for our characters and I have tons of questions. How did Amelia learn to shoot a man through a door by just listening to his footsteps? Why is Seth on a crusade to free farm workers? Why doesn’t Creeley know how to read? How did Bessie learn how to read? I guess I’ll just have to wait.

Damnation airs on Tuesdays on USA at 10/9c. Episode 5 airs this coming Tuesday.