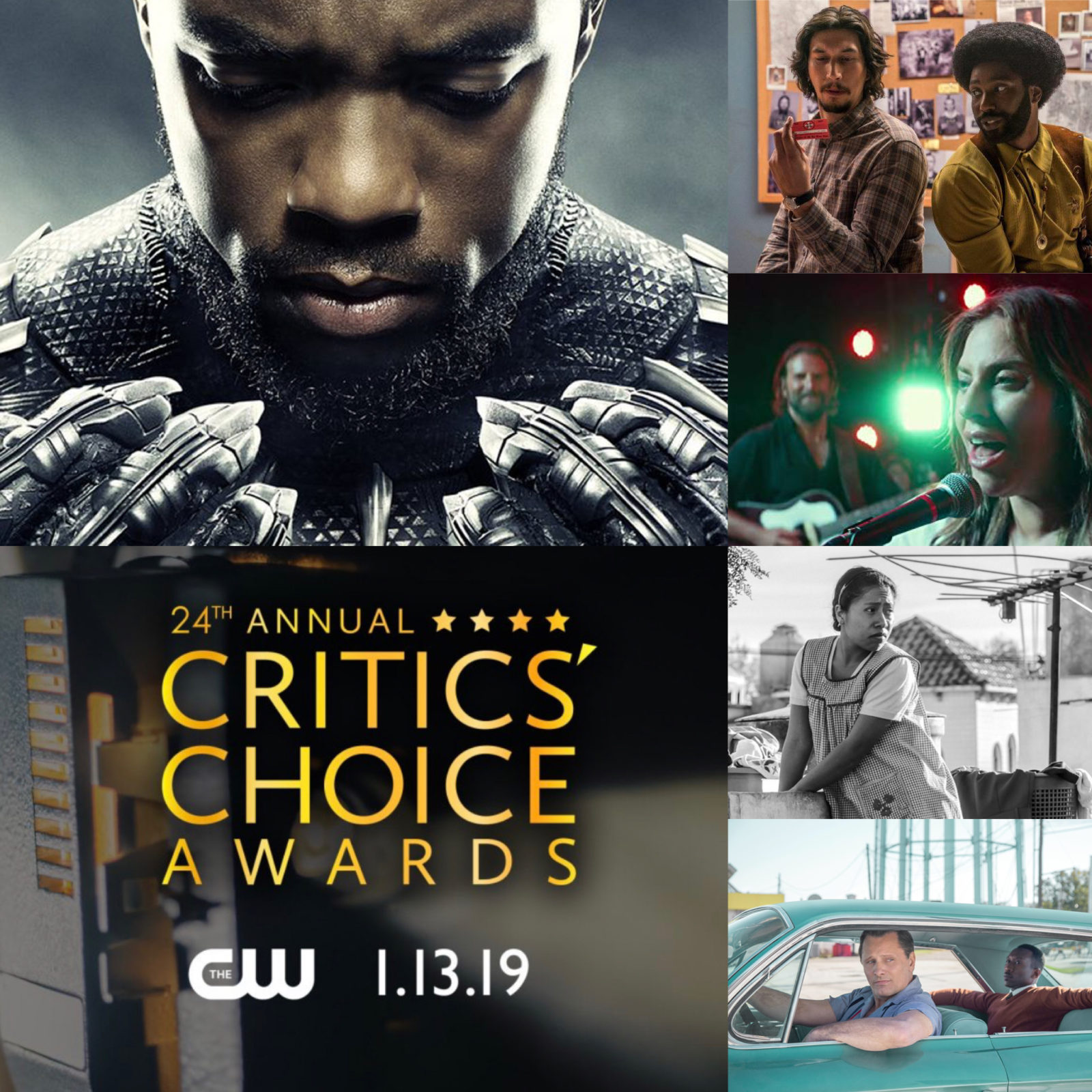 This evening marks the 24th annual Critics’ Choice Awards. The ceremony will be telecast on the CW network and hosted by actor Taye Diggs.  Every year, the Broadcast Film Critics Association and Broadcast Television Journalist Association — with its 300+ members — select their choices of the best in television and film.

This awards ceremony along with the Screen Actors Guild Awards — is the last hurrah before the Oscars which will broadcast Sunday, February 24th on ABC. In the film categories, this year has been a great year for Black entertainment, with such films as Black Panther, If Beale Street Could Talk and BlacKkKlansman competing together for Best Picture.

Black Panther has 12 nominations, BlacKkKlansman has 4, Crazy Rich Asians has 4, Green Book has 7 and The Favorite carries the most with 14 nominations.

Here is a list of the film nominees below:

Who Should Win? Black Panther

The film that became a cultural phenomenon, Black Panther not only broke box office records, but it also introduced comic book fans and non-comic book fans to the fictional world of Wakanda. The A-list cast along with the impressive crew created one of the greatest films to come out of the Marvel cinematic universe.

Who Will Win? Roma

Roma has been Netflix’s baby during the entire awards campaign season. The streaming giant has pulled together their full support for this film. Additionally, director Alfonso Cuarón is an awards favorite and the film has received much critical acclaim.

Who Should Win? Bradley Cooper – A Star Is Born

Bradley Cooper was stellar in A Star Is Born and gave one of the most riveting performances of his career as Jackson Maine, the ne’er-do-well rock star whose stardom is slowly fading away.

Rami Malek earned a Golden Globe win for his performance as the illustrious Freddie Mercury, and biopics tend to always have favor in awards shows.  That being said, Malek did deliver an incredibly groundbreaking performance and his win will not come as a shock to anyone.

Who Should Win? Lady Gaga – A Star Is Born

Who Will Win? Lady Gaga – A Star Is Born

It seems Lady Gaga has suffered from some snubs this awards season, the Hollywood Foreign Press, awarding Glenn Close for The Wife, which came as a bit of a surprise to some critics.  However, given the fact Lady Gaga has not received any accolades for her performance, its likely voters may have chosen her as the favorite in this category, to give her a shot.

Who Should Win? Michael B. Jordan

One of the best villains of the year, Michael B. Jordan fascinated audiences with his epic portrayal of Black Panther nemesis Erik Killmonger. Quotes from his character in the movie are indelibly printed in the minds of fans everywhere and his 3-dimensional character delivered a compassionate nuance that you rarely see in Marvel films.

Who Will Win? Mahershala Ali

Given the film’s controversy, Green Book’s ability to earn awards isn’t not slowing down their momentum.  Not only is it a heavy contender for both Best Picture and Screenplay, but Mahershala Ali will likely earn his Critics’ Choice award for Best Supporting Actor playing the role of Dr. Don Shirley.

Who Should Win? Regina King – If Beale Street Could Talk

She’s an actress who has a career that has spanned over 30 years and most certainly is due for an award for her work. And Regina King’s performance is the one that stands out the most in Beale Street which was an emotionally-driven role that enraptured viewers.

Who Will Win? Regina King – If Beale Street Could Talk

Regina King has led the trail on the awards campaign for her breathtaking performance in If Beale Street Could Talk. She has earned a Golden Globe award and last year earned an Emmy for her work in TV for the Netflix series Seven Seconds.

Who Should Win? Amandla Stenberg – The Hate U Give

Amandla Stenberg’s notable performance in The Hate U Give was amazing. The film adapted from the best-selling book of the same name by Angie C. Thomas is one of the best films of 2018. Sadly, the film has been snubbed across the board including an incredibly charismatic performance by Russell Hornsby.

Elsie Fisher seems to be on every critic’s best list for her performance in Eight Grade.  Make no mistake, her win is well deserved if she takes it home. She was able to somehow create a character several years younger than me completely relatable — and performances like that resonate.

Who Should Win? Black Panther

This A-list cast is nothing like we’ve seen before in a Marvel film.  And yes, you can arguably say that The Avengers also had a stellar cast, Black Panther’s carried Oscar-winning and Emmy-winning stars in both major and minor roles. From This Is Us Emmy-winner star Sterling K. Brown to Academy-Award winning actress Lupita Nyong’o and Golden Globe award-winning actress Angela Bassett.

Who Will Win? Black Panther

I’m going to go out on a limb and say Black Panther will win based on the stellar cast alone.  It’s quite possible the win could go to The Favourite for this one, but perhaps by a small margin, Black Panther will take this award home tonight.

Who Should Win? Spike Lee – BlacKkKlansman

Spike Lee ‘s work in the dark comedy BlacKkKlansman was a stroke of genius. He’s also been out on the campaign trail working to get this noticed by voters.  His adaptation of the true life of Ron Stallworth was one of the best stories of the year.

Who Will Win? Alfonso Cuarón – Roma

As mentioned before, Cuarón is beloved by award voters, and with his win for Best Director at the Golden Globes, it’s possible that will add a bit more weight to his win for Critics’ Choice.  Only time will tell.

The Critics’ Choice Awards airs tonight at 7pm ET on the CW.

Eddie Murphy, Nia Long, Kasi Lemmons, and Chiwetel Ejiofor to be Honored at the Celebration of Black Cinema