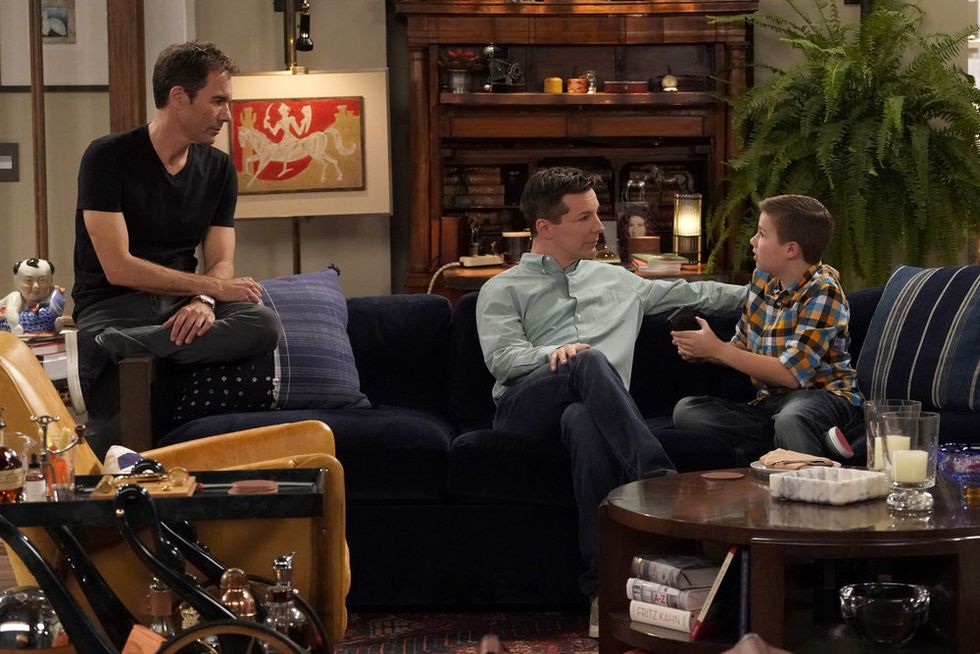 You know what, I’m just going to say it — thank God for Will & Grace.

The episode starts off with Grace dragging Karen off to work on a Saturday, which Karen is (rightfully, tbh) upset about. She wants to stay in bed and cuddle with Stan and lets Grace know she should be doing the same with a man of her own. Grace defensively mentions that she had a date last week, but Will jumps in and tells her the man was obviously gay, because of the way the man was sitting on the couch: “slumber party position” style. (Which might not be a joke, because I’ve honestly never seen a straight man sit like that either.)

But forget about the “B plot” of this episode, let’s focus on the main story. After the ladies leave for work and the men are trying to come up with something to do, there’s a knock on their door; a little boy named Skip has arrived by himself, looking for Jack. He asks if Jack knows a man named Eliot; Jack tells him that’s his son, but they haven’t spoken in years because of a falling out they had over Eliot marrying a conservative woman and “converting” for her. He wasn’t even invited to Eliot’s wedding. The little boy said he’d read all of Jack’s letters and wanted to find him while he was in New York, because “…I’m your grandson! Can I call you Grandpa?” Jack’s reaction is priceless.

As funny as it is imagining Jack as a grandfather, it gets even better when they realize Skip might actually be gay. Jack takes to him immediately, which becomes a problem when Eliot and his wife show up looking for their son. Eliot is dressed as a cowboy and talks with an affected drawl — he looks and acts like someone who gets mad at football players for kneeling during the anthem. They say they’ll wait for Skip downstairs so he can say goodbye to Jack, but then they’re leaving; they’re only in New York to drop off Skip at a “special camp.” Before he goes, Skip lets it slip to Jack and Will that it’s a gay conversion camp — his parents are trying to fix the “gay” in him. “So I can be normal,” he says mournfully as the elevator closes.

I had two instant, visceral reactions at this point:

See, Will & Grace has always been one of the most groundbreaking shows on TV, willing to cover storylines most sitcoms would never touch. People tend to only remember how hilarious and outrageous Karen and Jack are, and tend to forget that not only was this show silly and funny, it changed how the world wrote gay characters and covered gay stories. So one, we wouldn’t have a gay conversion camp episode in a classic multi-cam sitcom if it weren’t for this show, and two, I don’t trust any other show to handle it with the same humor and grace that this one did with this episode.

It’s sad to think that we as a society has regressed in any way, but let’s be real here —Trump is president, white supremacists have taken off their hoods and are having multiple rallies openly bare-faced, there’s an actual immigration ban that might be forced through Congress… it feels like things are going backward. So I think the timing of Will and Grace coming back is both ironic and perfect. It brought back some of the best characters I’ve ever seen on TV (bow down before Karen Walker) and it’s also a reminder that we’ve grown as a society before, and we can do it again.