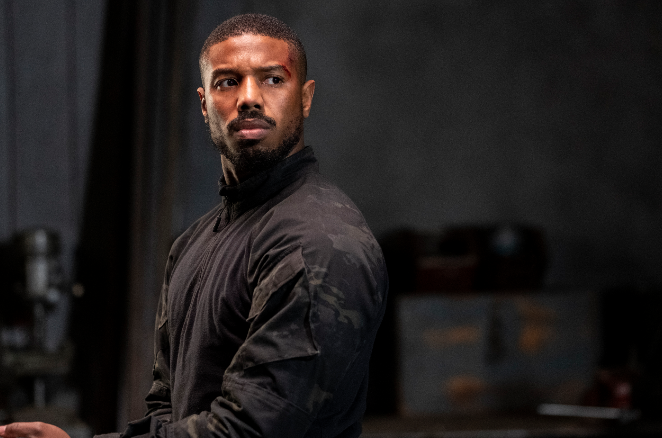 Remember that Amazon Alexa commercial with Michael B. Jordan as the speaker for Alexa?

So do we. If you haven’t seen it, do yourself a favor and watch it today. If you happened to notice the bus image that inspires the updated Alexa in the commercial, you would have seen it was for an Amazon Prime Video film. Voilà! Here we are with Tom Clancy’s Without Remorse. The Ryanverse continues on-screen with the latest Amazon Prime Video release. While the thriller/political drama makes no mention of Jack Ryan, fans of the books will pick up on the numerous easter eggs revealed, hopefully expanding the universe.

Without Remorse is based on the 1993 novel of the same name. It stars Michael B. Jordan (Creed), Jodie Turner-Smith (Queen & Slim), Jamie Bell (Fantastic Four 2015), and Guy Pearce (The Hurt Locker), with appearances of Lauren London (This Christmas) and Colman Domingo (Ma Rainey’s Black Bottom). The film is directed by Stefano Sollima (Sicario: Day of the Soldado). Without Remorse is the origin story of elite Navy SEAL, John Clark. When a squad of Russian soldiers kills his family in retaliation for his role in a top-secret operation, Sr. Chief John Kelly (Michael B. Jordan) pursues the assassins at all costs. While seeking justice for the murder of his wife Pam (Lauren London), John uncovers an international conspiracy. Joining forces with a fellow SEAL (Jodie Turner-Smith) and a shadowy CIA agent (Jamie Bell), John’s mission exposes a covert plot to start a war between the US and Russia. John must find the balance between honor and loyalty to find peace and reveal the figures behind it all.

Michael B. Jordan has joined a universe that has expanded beyond books into film, TV series, and video games. The thing they all have in common is amazing action sequences and special effects. The action is intense and fitting for the material. The airplane scene alone, without giving too much away, was enough to keep me wanting more from this franchise. The special effects and cinematography in that scene are worthy of high praise. While the previews gave us plenty to take notice of, the stunts in this film looked amazing. Jordan and his co-actors did most of their own stunts. Jordan trained with retired SEALS and military divers for his role in the movie. It paid off immensely.

Jodie Turner-Smith is a welcome addition to the film. While I was looking for James Greer, I found his niece Lt. Commander Karen Greer. She is the strong silent type, speaking up when she needs to without too much chit chat. It works. As one of the few, if not only females, to appear throughout the film, Turner-Smith portrays strength, brains, and beauty. She is loyal to those who deserve it and can kick ass when she needs to. In real life, a female Navy SEAL is a total unicorn. To see one played with precision and conscious choice was great.

Without Remorse is mostly well plotted, action packed, and filled with everything you would want from a Tom Clancy novel. However, while entertaining, Without Remorse fails to achieve a plot that isn’t predictable and, at times, cliche. We know John Kelly is going to retaliate, but I would have liked to see some of the research and thought process. I get, for time’s sake, things had to be cut, but it would have made for a more developed plot. The antagonist trope works well, but it is underdeveloped. We establish Rober Ritter (Jamie Bell) as the character, but don’t get to see his full potential on screen. One thing that was done really well was the focus on the action and consequences rather than the love story between Kelly and his wife. It’s there, don’t worry, but in small doses. It’s just enough to give us the gist of the kind of relationship they had that would result in Kelly going off the deep end. While it takes a moment for the build up to occur, the action is worth the wait.

The visuals were great, while attention to sound and dialogue fell through the cracks. I don’t know what was going on, but the audio (the mixing if I am being specific) was not done well. Things were muffled. Ambiance was louder than the characters, for no reason. The diegetic sounds, meaning the voices of characters and sounds made by objects, competed with each other, which then competed with the non-diegetic sounds, i.e.. the sounds effects or mood music. It was chaos for the ears. Some of the dialogue came off lazy. Trying to stay true to the book made for sentences that work on paper and not out loud, acted on camera.

I appreciated the small effort to input some social commentary on how people, Black men in particular, can serve their country and still be treated horribly. “We served a country that didn’t love us back,” says Kelly. I realize the film was probably finished before that video of the two police officers drew their guns on a uniformed Army officer during a traffic stop and sprayed him in the eyes with pepper spray. But, the phrase rings louder than I think they planned. It was noticeable and a hand clap was given during viewing.

Tom Clancy’s Without Remorse will premiere on Prime Video April 30.

Michael B. Jordan is ‘Without Remorse’