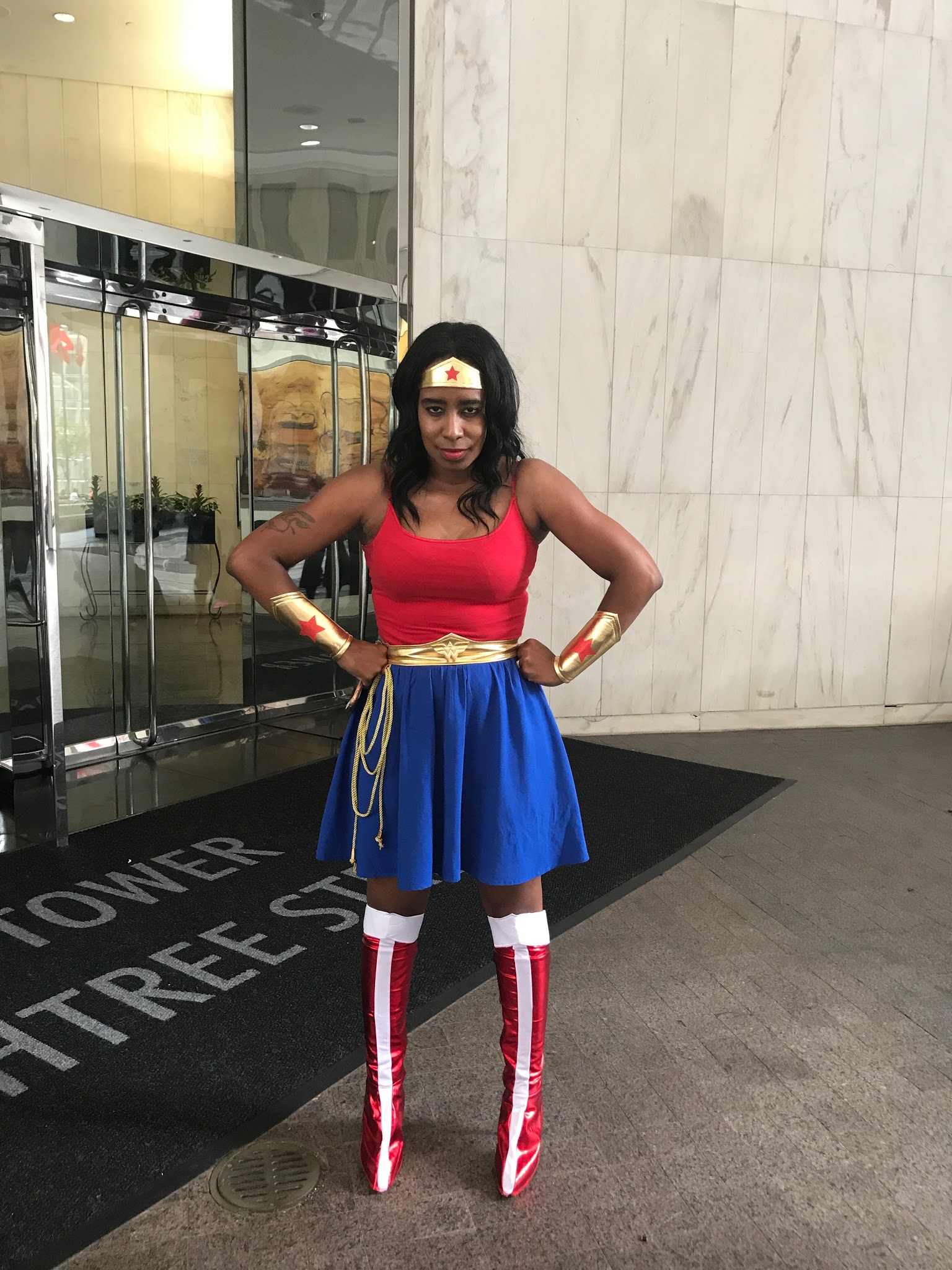 Over 82,000 people convened in Atlanta, GA from September 1st-4th for the city’s annual ode to all things geek, nerd, cosplay, and gaming related. DragonCon has become a 4-day, Labor Day weekend extravaganza that brings all the activities and star power of SDCC and NYCC but with a more manageable crowd. This year, the con celebrated its 30 year anniversary with 1987 nostalgia panels, but it also celebrated the latest and greatest in pop culture. The first official day of the con kicked off with an in-depth discussion about DC’s Wonder Woman film.

The panelists and attendees had a general consensus about the movie being a great start to what will hopefully blossom into a film franchise. Tyra felt the movie was given a low budget and was riddled with trolls who wanted to see it fail because it was a DC movie with a woman lead, but the film did a great job shutting down all of the negativity. Jenny agreed and noted how Diana Prince’s strength was inherent instead of being a result of trauma or what a man had done to her. The room praised Gal Gadot’s casting as Wonder Woman and thought she was a novel choice to play a superheroine. One audience member said Gal Gadot IS Wonder Woman off the screen because of her background as an Israeli soldier and her dedication to filming while pregnant with her second child. Tyra thought Gadot’s status as a relatively unknown actress was probably best for the role because there were no preconceived notions about how she would handle the character. Cammie praised both Gadot as well as the other women of Themyscira and how they were real, “everyday” women with varied life backgrounds. The diversity of Themyscira was also discussed with much of the room wishing there were more speaking roles for the women of color and interactions on the island before Diana left with Steve Trevor.

The warrior women’s functional wardrobe complete with proper breast support and hair pulled away from their faces were two of the many things that women noticed during the film. Tyra and Cammie attributed these important details to the film’s woman director Patty Jenkins and how it makes a difference to have a woman at the helm of the story. Jenkins captured Wonder Woman and the Themysciran women’s strength and agility from angles that didn’t objectify them. She fought for scenes like No Man’s Land where Diana took the lead and pushed back against Steve’s requests for her to wait to fight. A historian in the audience loved this scene because of the details which made it historically accurate, including the trenches with the barbed wire. This portion of the movie, along with the ice cream scene and Diana trying on American women’s clothing, was a favorite scene among most fans in the room. Cammie believed it was a better fight scene than the final fight because it showed Diana’s prowess as a warrior.

The Wonder Woman panel wrapped with discussions about Dr. Poison, Steve Trevor, Etta Candy, and the film’s WWII setting. Several audience members loved Dr. Poison and how she used her intellect to stir up trouble. But, most of the room thought she wasn’t utilized to her maximum potential in the film even though she was the most interesting villain. Chris Pine’s take on Steve Trevor had mixed reactions, but most people were glad his character was able to be alongside Diana without overshadowing her. Pine was also praised for how he handled interviews and discussions concerning feminism about the film. Etta Candy’s relationship with Diana was a high point for Cammie, who loved how the women almost immediately trusted each other. The audience agreed and said Candy’s comedic relief was a high point in the film. The WWII setting was also praised due to the messiness of the war and how there was no clear good/evil, which made it easier to go for the love/peace narrative. The skewed Greek mythology in the film was panned by the room, but everyone agreed it was a minute misstep in an otherwise enjoyable film. DragonCon also had its fair share of Wonder Woman cosplayers, including panelist Cammie: 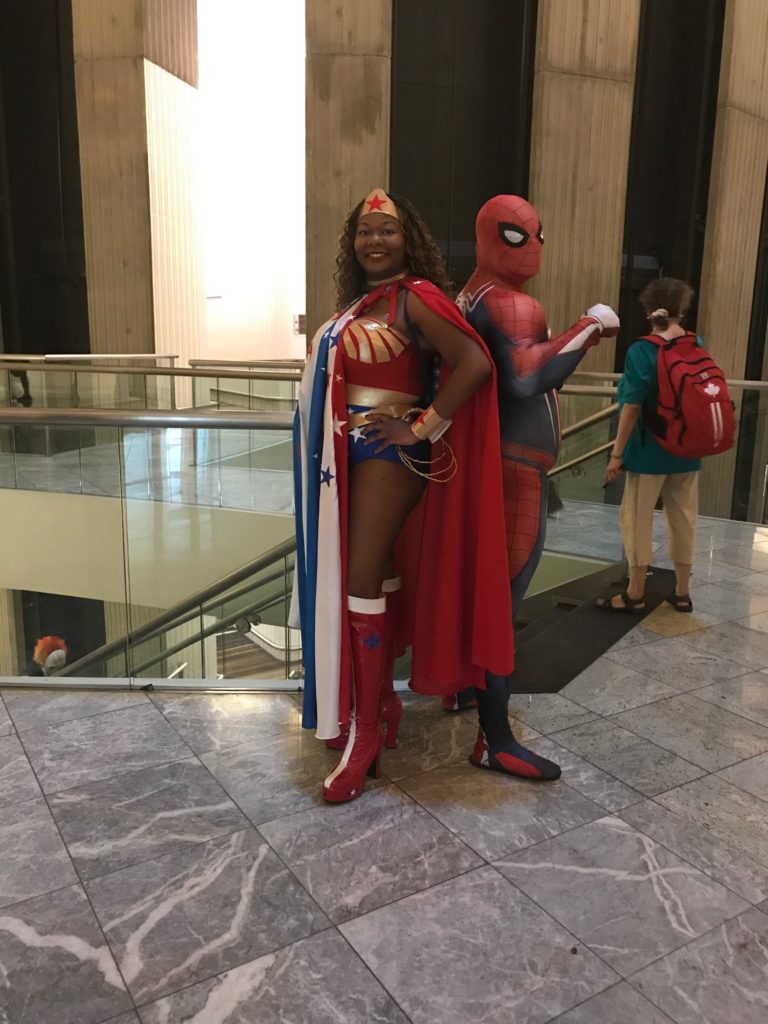 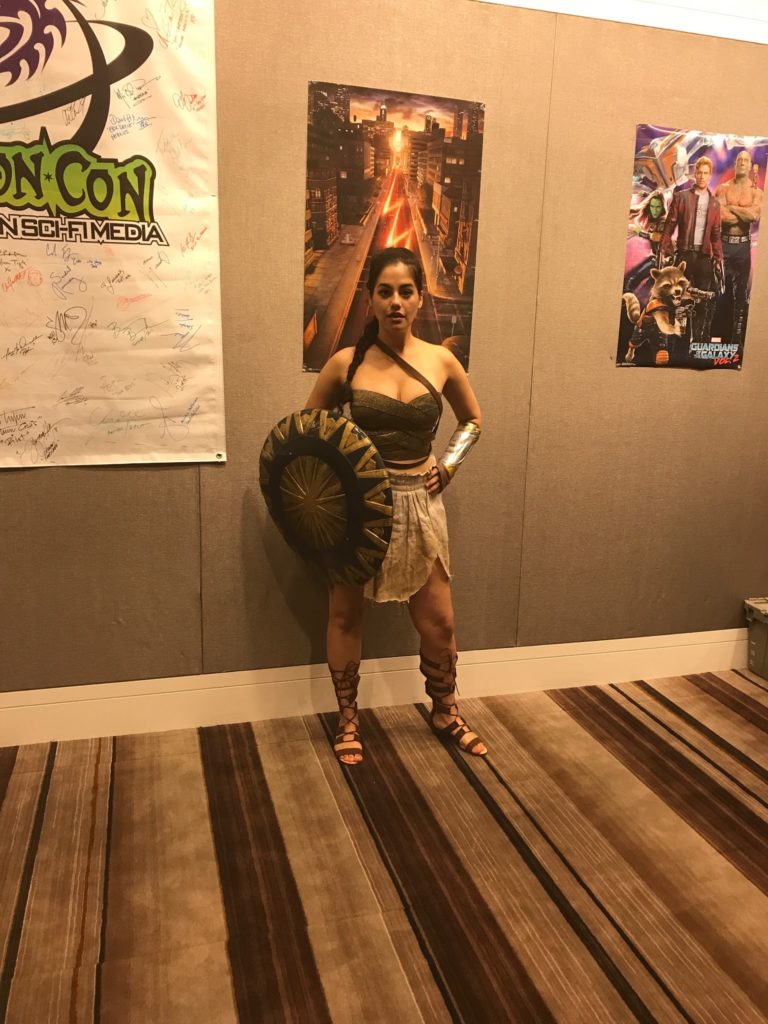 The Women of Modern Doctor Who

DragonCon’s celebration impactful women extended far beyond the famed superheroine. The convention’s BritTrack, which celebrates all things British culture, also had an interesting conversation about women and their place in the sci-fi series Doctor Who. The conversation jumped into the show’s recent announcement of the first female Doctor and the panelists discussed how this could affect The Doctor as a character. The Doctor is an alien from Gallifrey, but has always presented as a White human male. This has allowed him to become an authoritative figure in many situations, particularly on Earth where people would not respect a woman or a person of color in the same way. The panelists debated about whether Gallifreyans even acknowledge gender with some saying the Eleventh Doctor thought he was a girl when first regenerated and others bringing up how the Twelfth Doctor often confused gender. Either way, they all agreed that Jodie Whittaker’s Doctor will face difficulty as a woman and will probably be doubted even more by other characters. The audience thought it would be exacerbated if her companion is a man because people who don’t respect women as authority figures to deflect to him for guidance.

The panelists then went on to talk about some of the modern eras often discussed companions. Some fans in the room accused the show of queerbaiting with Clara by dropping hints about the character being bisexual. However, the panelists noted that bi representation is a slippery slope because it can quickly turn into fetishization. They also discussed the Jenny/Vastra relationship and how Madame Vastra eventually started treating Jenny poorly in later appearances. The room then began to focus more on the man behind many of these characters – current showrunner Steven Moffat. The pane said he was great at writing one-off episodes but his story arcs were problematic. He was praised for his portrayal of Madame de Pompadour in “Girl in the Fireplace” and his introduction of River Song in “Silence in the Library.” However, Moffat had a female editor in his corner during those Russell T Davies era stories and she was fired when he became the showrunner. Several panelists thought Moffat had a penchant for forcing women into some sort of mothering or caretaker role. River Song ended up downloaded onto a mainframe and becoming a mother to Donna’s children. Amy Pond was kidnapped and used as an incubator to birth River Song so she could kill The Doctor. And, Clara became the Twelfth Doctor’s caretaker who had to constantly work with him so he would treat others humanely.

However, there was a shining light with Bill, whom the audience members and panelists generally liked as a companion. Bill’s presence as a Black, lesbian woman was praised as well as her chemistry with The Doctor, but her premature ending and pairing off with a woman she barely knew was disliked by most of the crowd. Fans hoped that Bill opened the door for more diversity in the TARDIS with future non-heterosexual and/or companions who were from varied ethnic backgrounds. Martha Jones was a hot button for most of the room, especially for one fan who thought Martha was the strongest and most capable companion who was treated unfairly by the writers and the fandom. The panel agreed, saying the show’s decision to have The Doctor treat her like a replacement Rose Tyler was a key factor in her poor reception by some of the fandom. But, a few Black women fans in the audience spoke up and said her Blackness played an equal role because some of the fandom simply didn’t like seeing a Black, upper-middle class woman with her own ambitions and dreams outside of The Doctor as a primary companion.

There wasn’t much said about Rose Tyler herself outside of fans noting how she was compassionate and relatable to many people who wanted to escape their lives. Her positioning as The Doctor’s true love made most of the room uncomfortable because they didn’t want romantic feelings mixed in with their favorite adventure series. In the end, the most interesting note of the conversation talked about a quote by John Scalzi, a popular science fiction writer. He compared different levels of privilege with playing an RPG like World of Warcraft and said that cisgender White straight men are playing on the lowest difficulty setting possible. The default levels of success and their ability to level up is much easier than others, especially if they are wealthy. The further a person deviates from the standard, the harder the game of life is for them – a hauntingly correct analysis.

Panels aside, women attendees at DragonCon rocked the cosplay scene with innovative looks. DragonCon is world famous for having the best cosplayers and this year did not disappoint: 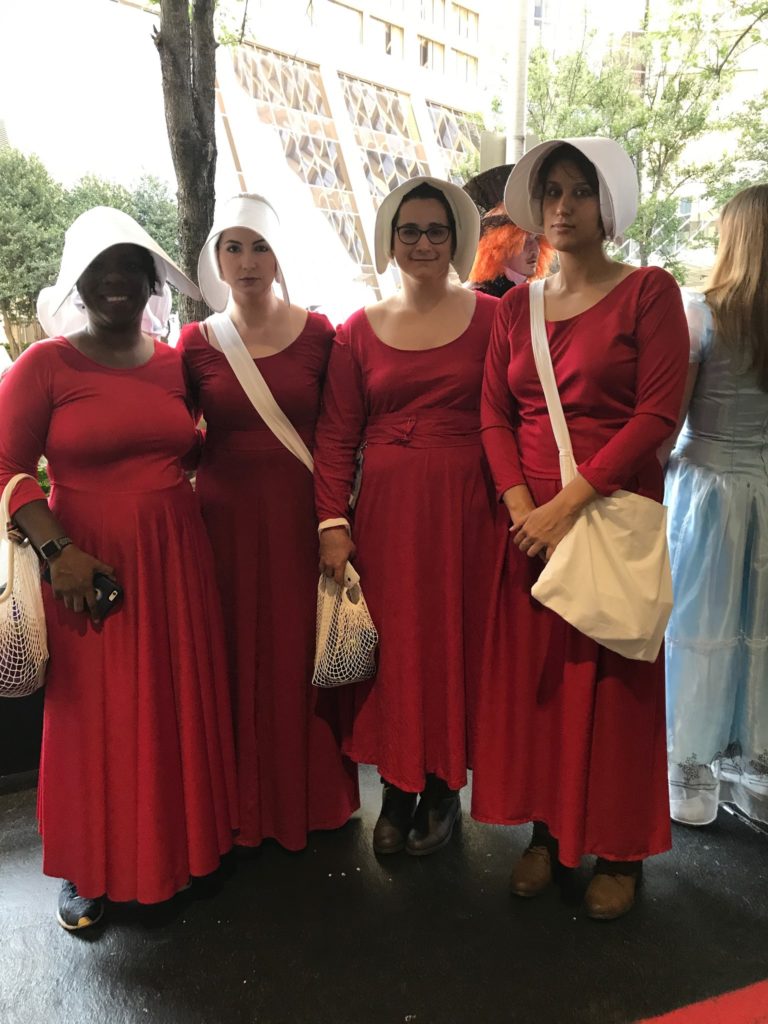 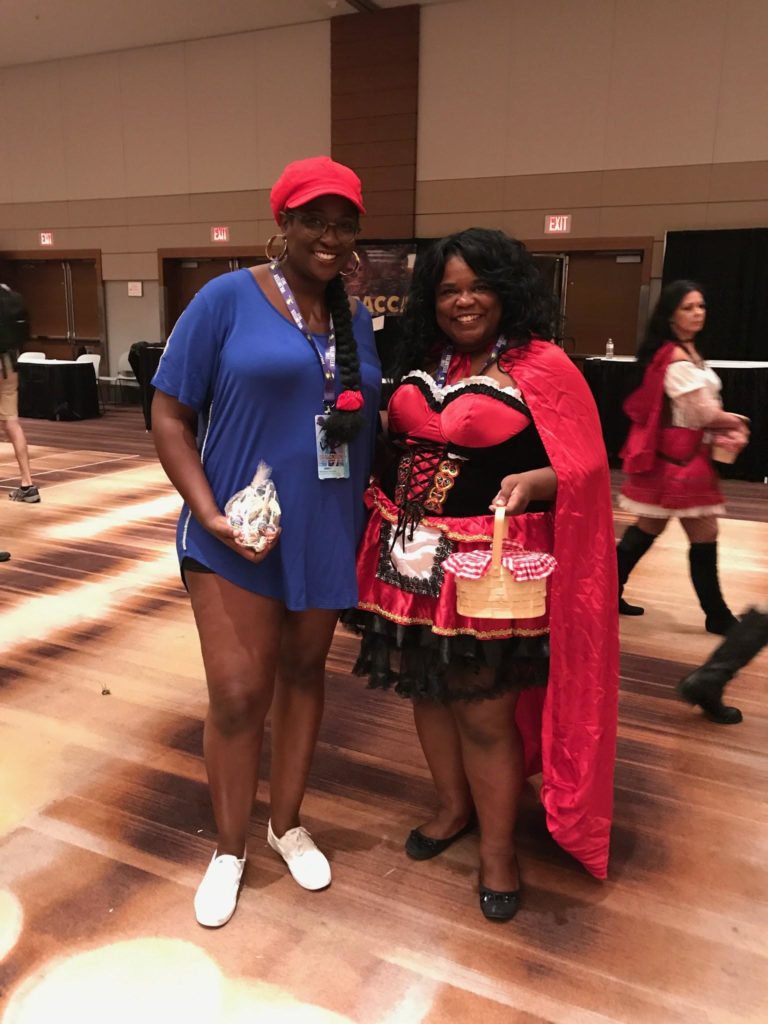 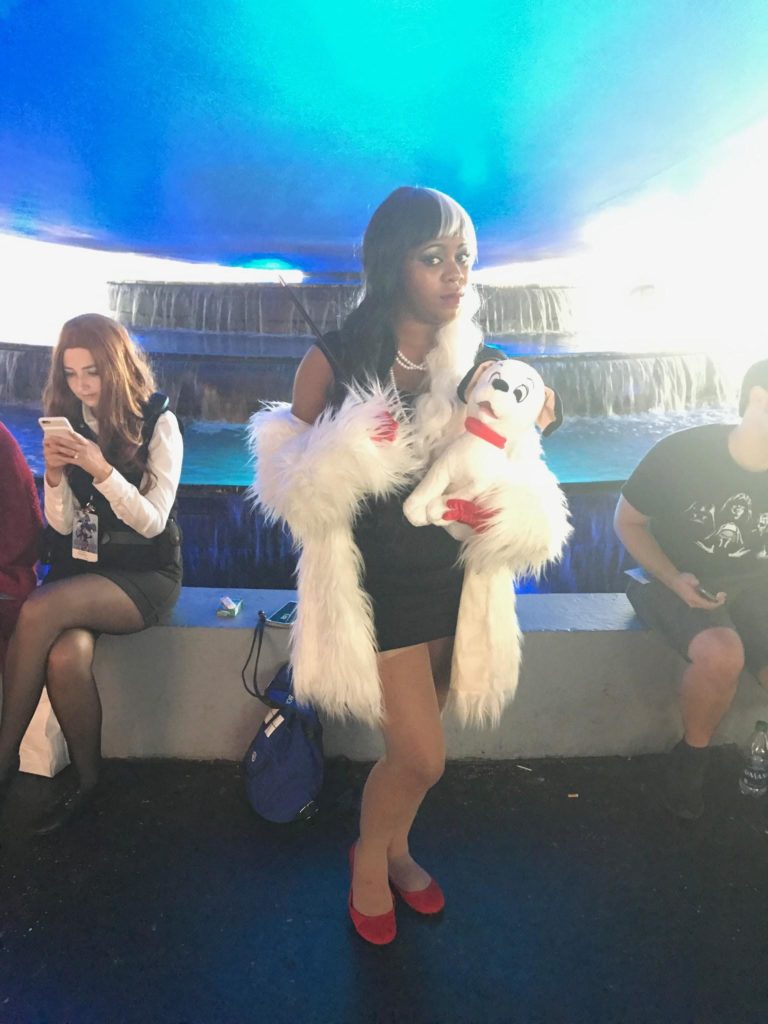 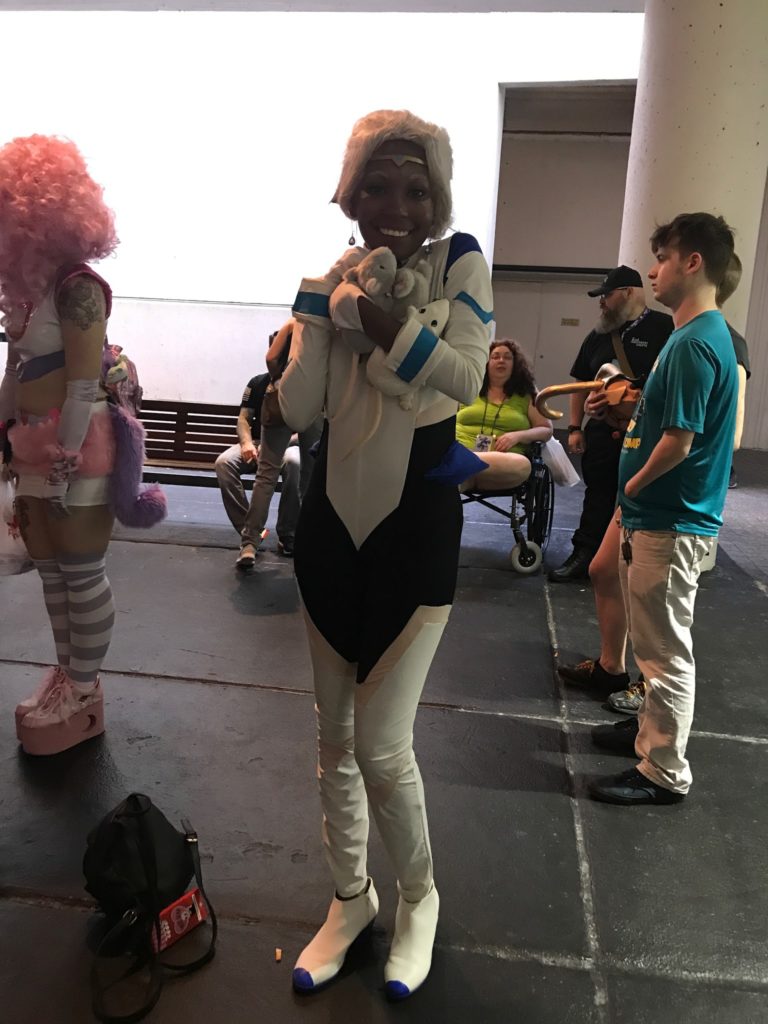 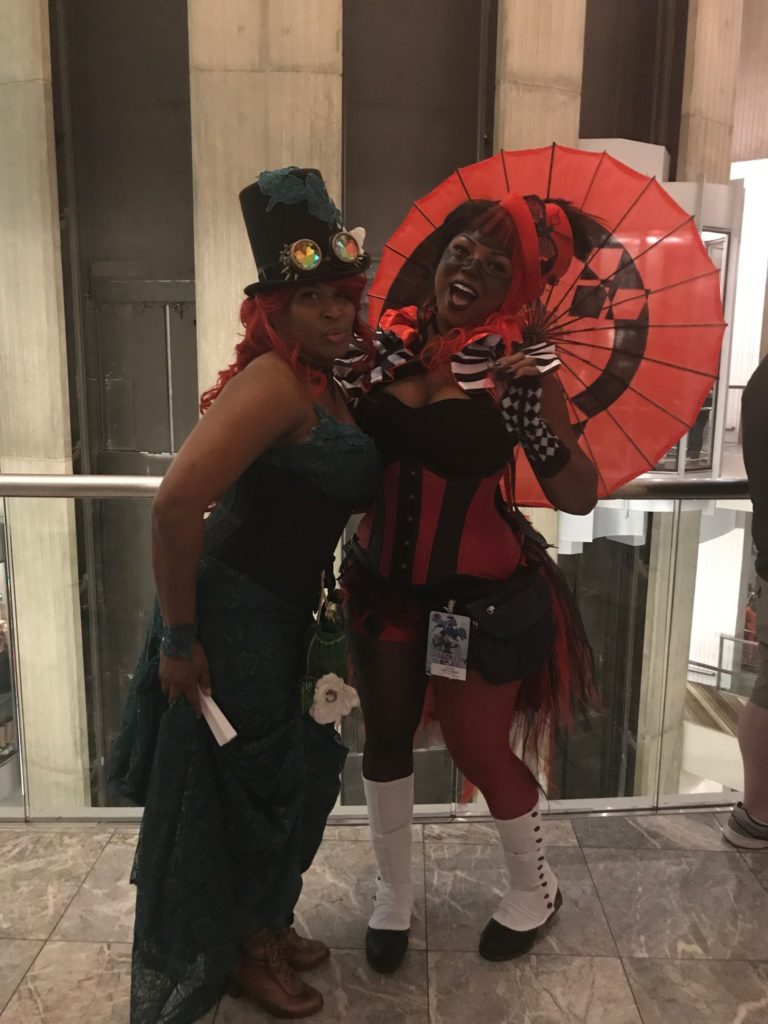 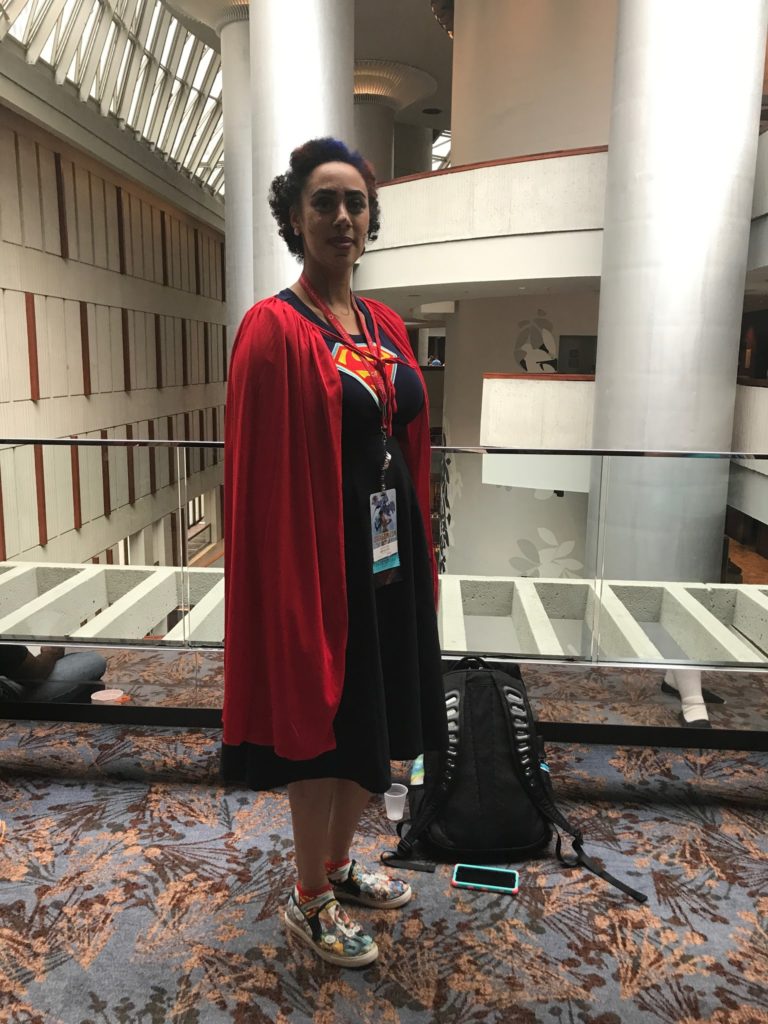 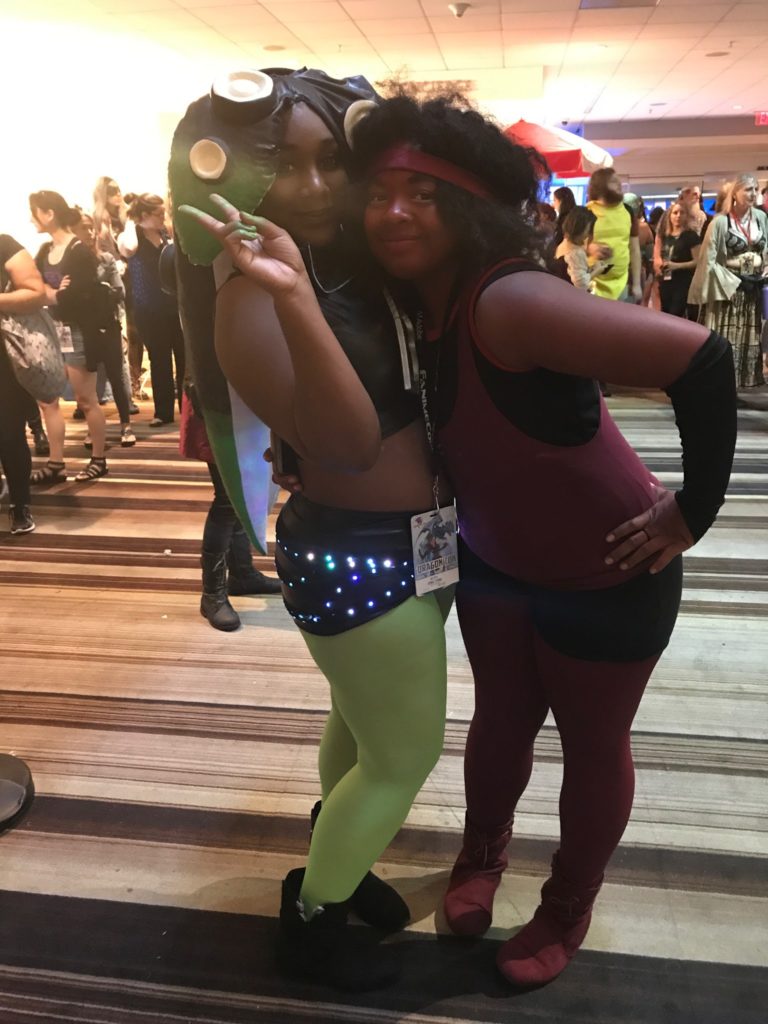 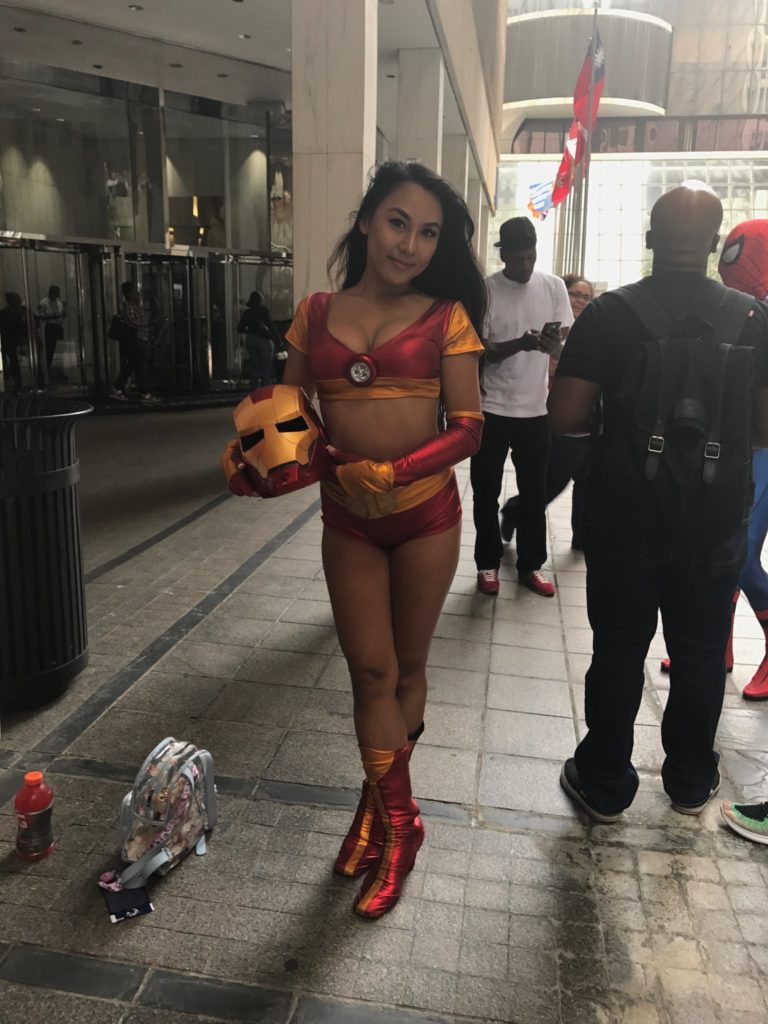 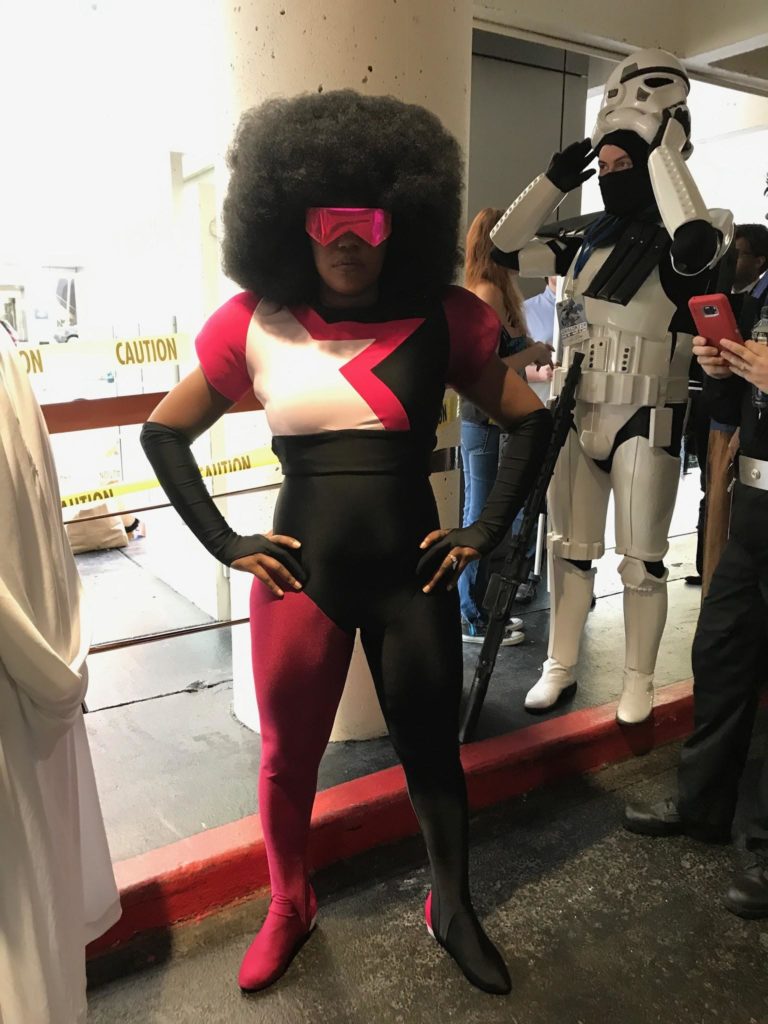 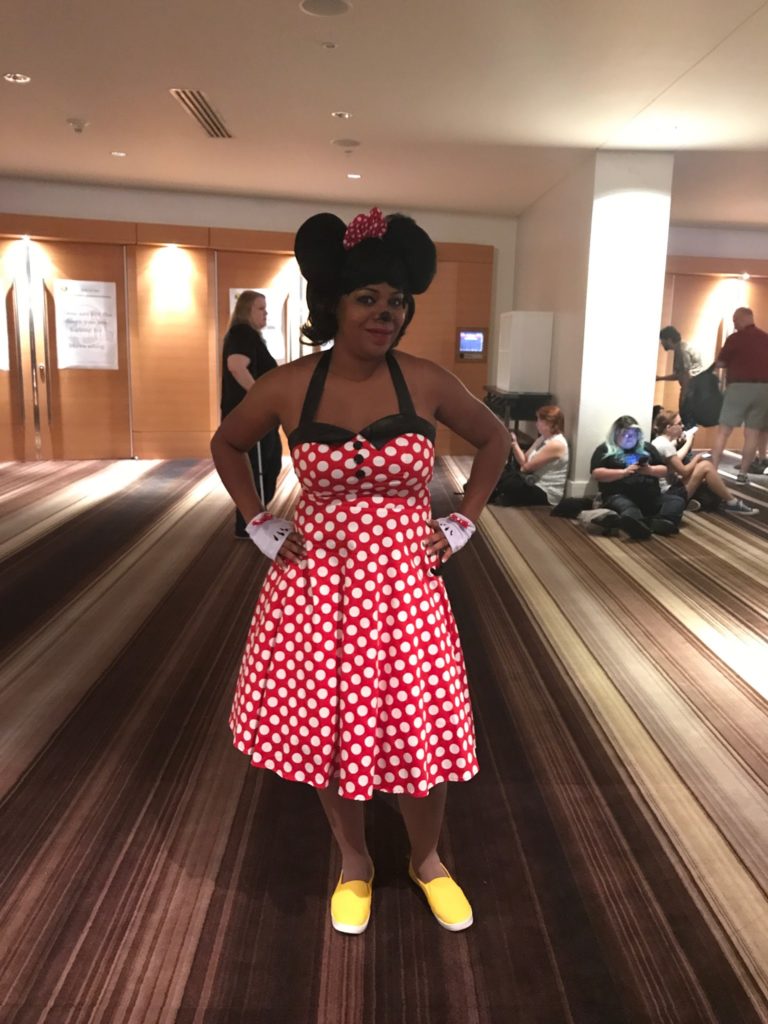