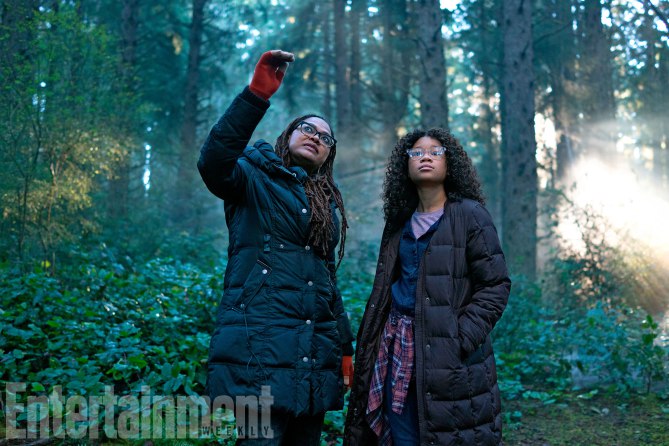 That beautiful quote stunned me and left a heavy impression. I had the voracious mind of a 13-year-old black girl nerd and I was hungry for representation. When it finally found me,  Madeleine L’Engle’s 1962 novel, ‘A Wrinkle In Time’, was so much of what I needed it to be.  I escaped my mundane reality headfirst into the pages where I was transformed into Meg Murray.  As Meg, I lived the vicarious experiences of a brilliant but stubborn teen girl on a cross dimensional quest to find my father while I protected my genius baby brother, Charles Wallace from an evil omniscient planet of homogeneous darkness!! I got to do all of that armed with some pretty intense science and the perplexing wisdom of three supernatural beings.

LISTEN! I knew I wasn’t actually traveling the galaxy and saving the world from allegorical ’Evil’, but at thirteen, I was introspective enough to be able to relate this to my personal life; to my personal search for my own father; to my personal hatred of corrupt authority figures and forced assimilation.  You just could NOT tell ME that I wasn’t battling my own personal version of ‘The Man With the Red Eyes!!! I kept losing myself to the world L’Engle created, finding joy in the representation it did provide, and using my imagination for the rest.

I never expected that years later, my 13-year-old imaginings would return as a multi-cultural, multi-hued, multi-dimensioned, multi-generational reimagining of the novel!! The script has been adapted for Disney by Jennifer Lee (Frozen) and is being directed by Ava DuVernay (Selma, 13th).

The Mrs. W’s have been slaying for millennia and refuse to stop now!!!

These three celestial beings just traveled back through space/time to snatch my little 13-year-old edges and they will probably NEVER grow back! I have accepted it. (Besides, if anyone points out my missing edges I will kindly inform them that “A straight line is not the shortest distance between two points” and divert attention with an impressive knowledge of the Tesseract concept!)

In EW’s photo stills, we see the eternally effervescent Reese Witherspoon as Mrs. Whatsit, the powerful Mindy Kaling as Mrs. Who. And the incomparable Oprah Winfrey as Mrs. Which.

Also pictured is rising star, 14-year-old Storm Reid as our Meg Murry with Levi Miller as Calvin. Missing scientist Dr. Murray is cast as Chris Pine and he is giving off serious NaCl Bae vibes in these stills!

I definitely see it for Reese Witherspoon as Mrs. Whatsit, the “youngest” and most hot-blooded of the three.  Her character is able to connect with the children’s humanity in ways  Mrs. Who and Mrs. Which seemed to have forgotten years ago. In the original novel, it is revealed that Mrs. Whatsit was once a star who sacrificed herself by exploding to save the universe. I cannot wait to see if the characterization Reese brings us is impassioned burnt-out star intent on retribution!

It will be enchanting to watch how Mindy Kaling navigates highlighting the parallel between her notoriously hilarious style of quirky humor and penchant for pop references with that of her character, Mrs. Who.  (Imagine Mrs. Who quoting Oprah or Beyonce’ in a pep talk to Meg. Meta goals to be honest!)

Honestly, to cast Oprah Winfrey as the wizened Mrs. Which (who is so powerful and good that she mostly just exists as a shimmering ball of light) seems unfair. I’m not exactly sure that Oprah ISN’T Mrs. Which in real life, especially after these gorgeous photos!!

In EW’s exclusive interview Ava discussed the significance of this casting for her:

“My whole process with this film was, what if? With these women, I wondered, could we make them women of different ages, body types, races? Could we bring in culture, bring in history in their costumes? And in the women themselves, could we just reflect a fuller breadth of femininity?”

Ava Duvernay has a  track record of directorial gold, Jennifer Lee has a history of weaving wildly loved tales, and the sheer combined talent of the actresses assembled already promises to be a spellbinding experience. I have no doubt that they will succeed in meeting these admirable goals and so much more!  Women of color continue to be consistently uplifting and amazing despite the odds stacked against us.

As Mrs. Whatsit said,  “Life, with its rules, its obligations, and its freedoms, is like a sonnet: You’re given the form, but you have to write the sonnet yourself. What you say is completely up to you”