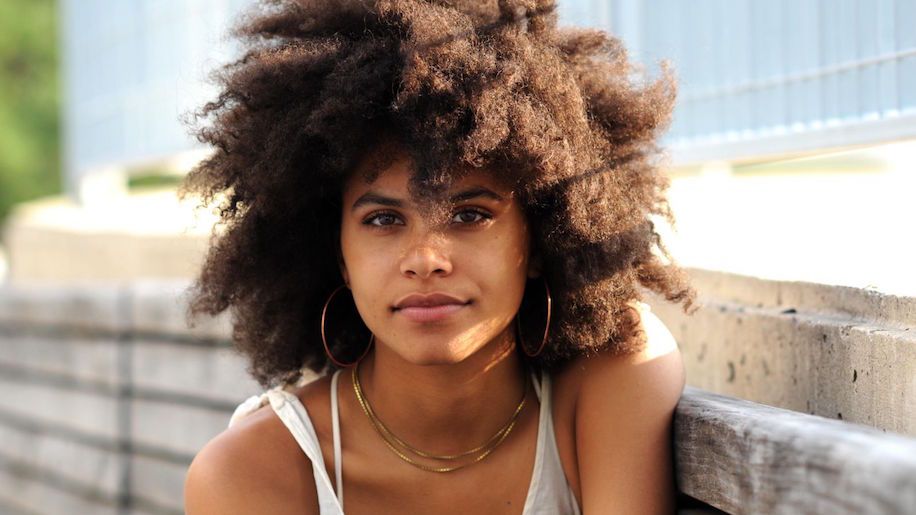 Since giving birth to my son a couple months ago, I’ve been paying more attention to mothers, particularly how they’re portrayed on screen and how that relates to my own reality. For me, Zazie Beetz’s characters Van and Noelle (of Donald Glover’s Atlanta and Joe Swanberg’s Easy, respectively) represent the essence of young, Black, working motherhood. These characters are old enough to know better and young enough not to care. Their good qualities are everything I aspire to be, and their bad ones remind me that mistakes are inevitable and to get comfortable with the idea of making them. With so few young, Black mothers portrayed on television, the characters Zazie Beetz plays are refreshing, real, and relevant.

In Atlanta, which airs on FX, Beetz plays the sometimes girlfriend and baby mama of the main character Earn, an undeniably smart, somewhat directionless, college dropout, looking to manage his cousin’s budding rap career. They live together only when Earn has money to contribute to the rent, but for the most part, Zazie holds most of the responsibility of raising the little girl the pair created.

In the Atlanta episode titled, “Juneteenth”, Van drags Earn to a high society Juneteenth party in hopes of gaining connections that will help their daughter’s future. She encourages Earn to play the role of her husband, the Princeton graduate, and to be vague about what he does for work. Though the host of the party is bougie and unlikeable, she thinks highly of Van, telling her, “You are a smart, beautiful, and a determined lady like me.”

Later at the party, Earn says to a group of women, “Van does everything. She works, she raises our child, she’s smarter than me, better than me.” Though he ends with a bit of sarcasm about never looking at another woman (something we know is untrue since the episode opens with Van picking him up at a girl’s house) I think Earn means the compliments he gives to Van. He knows that she is too good for him.

In the episode titled, “Value”, we see Van having dinner with one of her girlfriends, Jayde, who has opted for the pre-basketball wife’s lifestyle. She dates various ballers, takes international trips regularly, and seemingly never pays for a meal. Her lifestyle is arguably the opposite of Van’s, yet it’s clear that she views Van in the same way Monique (the Juneteenth host) and Earn do–smart, beautiful, and far too good of a catch for her baby’s father.

Van’s flaws are finally revealed at the end of this episode. The day after smoking weed with her girlfriend and the ballers that meet up with them, Van has a drug test at the school where she is a teacher. Realizing that the drugs are still in her system, Van goes to great lengths to find another way to pass the test. Ultimately, she fails and loses her job, the job that is supporting her and Earn’s daughter.

It is difficult to watch Van fail because she is smart and determined and shares a child with someone who, at least on paper, appears to be the opposite. With that said, there’s also some relief in seeing that she’s not perfect and sometimes she messes up too. Women in general are given so little room to fail, Black women even less so than other demographics, so showing Van make such a crucial mistake helps to humanize her.

In the Netflix original series Easy, Beetz plays Noelle, girlfriend to Jeff. The pair work at a coffee shop named Dark Matter but they each have their own entrepreneurial aspirations. They end up starting an illegal beer brewery in their garage along with Jeff’s brother, Matt. If it remains a small operation, Jeff is free to experiment with different types of beer, but Matt, eager to leave his boring cooperate job, ends up pushing the business further, meaning that they are limited to making IPA’s, much to Jeff’s dismay. In some ways, this works out for the best because Noelle and Matt’s wife have begun their own side business, Tail Ale, a dog biscuit company. Their product gets picked up by a local market around the same time Jeff realizes he’s sick of the IPA’s.

Once again, we see Beetz in a role that defies the stereotypes of young motherhood, particularly young, Black motherhood. Like Van, Noelle is determined and smart.  Unlike Van, she has a man that consistently supports her, and when the dust settles, they both give each other a fair amount of room to grow.

I struggle to think of another young, Black, female entrepreneur, let alone one with a small child, I’ve seen represented in a scripted television series. The last one I can think of is Maya Wilkes of Girlfriends, who sold books from the trunk of her car. Black women, particularly young mothers, are rarely given the opportunity to be seen as intelligent or business savvy, so in some ways Noelle feels like a breakthrough. I don’t think this is unintentional. On a different episode of Easy we see an overweight character deal with an issue that has nothing to do with her weight. In fact, there’s no mention of her weight at all, giving the impression that the shows creators are interested in pushing past stale tropes and presenting unique and fascinating characters.

The last time audiences see Beetz’s two characters, they are on opposite ends of the spectrum. Van in unemployed with an unreliable baby daddy and no mention of family nearby. Noelle’s partner, on the other hand, has become a stay at home dad, allowing her to make major leaps in the business she shares with his sister-in-law. The two girls have been dealt different cards in life. The factor that unites them is that they are smart, determined mothers played by an actress dedicated to depicting them with honesty and vitality. The future holds great things for Noelle, Van, and Zazie herself, and that makes me certain that the future is bright for all determined young, Black mothers.

Kesia Alexandra is a freelance writer from Washington, DC. Her fiction is available on Amazon and she keeps an online journal at okaykesia.wordpress.com. You can find her on Twitter: @okaykesia.