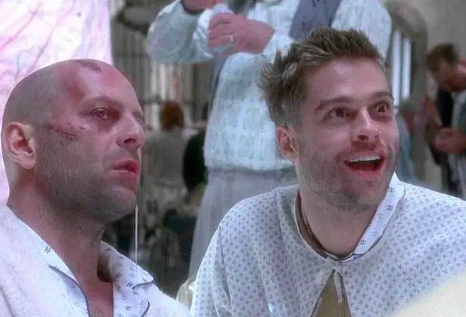 Prevention, not time travel, is the key to halting a viral contagion.

“Five billion people died in 1996 and 1997, almost the entire population of the world. Only about 1 percent of us survived,” opens the credits of Terry Gilliam’s 1995 time travel pandemic sci-fi noir 12 Monkeys. Twenty-five years ago this sounded very dramatic, but it’s not really until now as the globe battles a pandemic that these numbers really hit home.

12 Monkeys follows James Cole (Bruce Willis), a convict turned time-traveler sent from 2035 to 1996 in order to help a team of scientists isolate exactly who released the virus in an attempt to rewrite history. The only problem is they can’t seem to get science to work in their own time as they send Cole back to 1917, 1990, as well as 1996, scrambling his brain while creating multiple timelines where different versions of Cole all exist simultaneously. As the movie moves back and forth between the future and various pasts, Cole begins to uncover a variety of layers at work involving the virus that sparked such a horrific pandemic he survived as a child.

On his journey, he meets Dr. Kathryn Railly (Madeleine Stowe), who feels she knows him from somewhere and who eventually writes a book about people in the present who have claimed to come from the future to try to prevent plagues. Cole is only one example she uncovers from history. Even though she doesn’t at first believe in her own theory, she eventually does as she gets caught in James Cole’s tragic loop.

Cole also connects with Tyler Durden’s unofficial precurser, Jeffrey Goines (Brad Pitt), whose famous father Leland (Christoper Plummer) is a world famous virologist. Jeffrey and Cole meet during a stint in a mental health facility in 1990, when Cole had been sent back to the first wrong year. Because of Jeffrey’s agitated but articulate rants about germs, consumerism, capitalism, and more, Cole eventually comes to suspect Jeffrey and his animal liberation group the Army of the 12 Monkeys is responsible for the pandemic — a belief Jeffrey allows both Dr. Railly and Cole to fixate on as his real plan had nothing to do with viruses at all. He and his crew wanted to liberate all the animals from the Philadelphia Zoo.

One of the particularly fascinating things about 12 Monkeys that distinguishes it from other pandemic and virus stories like Contagion is the fact that it focuses not even a little bit on what the actual virus does, just the world it’s left behind. It causes a “weird fever,” as Cole describes, and kills quickly. We never see the virus in action, even though we do “see” it at the end when the virus-obsessed doomsday prepper Dr. Peters (David Morse) opens up the vial that starts the world on its path of decimation. This horrifying void of information, in particular since it’s one that caused the deaths of five billion people, is one of the most chilling aspects of 12 Monkeys.

However, what’s arguably more intriguing about a virus movie that doesn’t really feature the virus is the notion 12 Monkeys presents that the past is static and cannot be altered. Every time Cole goes back in time, it’s as if a copy of himself is made. Even if he was already in that time, another version has appeared. The same applies to his cell neighbor in prison José (Jon Seda), who has left an imprint on multiple timelines as well without actually changing anything. The film’s ambiguous ending can imply a number of things, and the main one is that history proceeded just as it did. Five billion people died and the rest went to live underground. The clear message here among so much timeline obfuscation is simple: The past is fixed and only prevention in the present can and will prevent a virus spread as we see in 12 Monkeys. Time travel is futile when it comes to a pandemic.

Putting this into our current context 25 years later, we can already map certain moments where action wasn’t taken in time and the virus spread faster than it should have. Instead of quicker preventative action, too many non-medical folks would rather re-evaluate the recent failures in the current timeline rather than refocusing on the present to further curb and hopefully stop the pandemic before it can reach a critical mass. But instead, much like the scientists in Cole’s 2035, imaginary fixes like injecting disinfectants and shooting ultraviolet rays into a human body are being touted as preventions and cures when there is absolutely no evidence these things work. All of this because a certain segment of the population would prefer to get their hair cut than do the social/physical distancing required that is a known and effective method of not spreading viruses.

Another disturbing thing we see reflected in 1995’s 12 Monkeys to life two and a half decades later is the fact that prisoners and convicts are still being used as guinea pigs for social experiments. Outbreaks of today’s virus in prisons across America show just how inhumane conditions behind bars are. While the American justice system and prison industrial complex is primed to incarcerate disproportionate numbers of Black and Brown Americans to provide cheap prison labor, these same systems are sitting back and just watching as they get infected, suffer, and die alone in their cells.

In 12 Monkeys, the scientists in 2035 were trying to figure out a way to return to how things were before the 1996 pandemic. As we are learning in 2020, it’s going to be impossible to go back even to how things were in 2019 since the virus continues to expose virtually every weakness in America’s economy, government, industry, healthcare, and even socio-culturally. 12 Monkeys understands that nothing can go back to the way it was, no matter how many times they try to fix the past. We need to catch up to this knowledge right now before our real-life numbers of lost lives starts catching up with 12 Monkeys.

Lost Girls vs. Lost Boys: The Case for ‘Fight Club’ on Its 21st Birthday