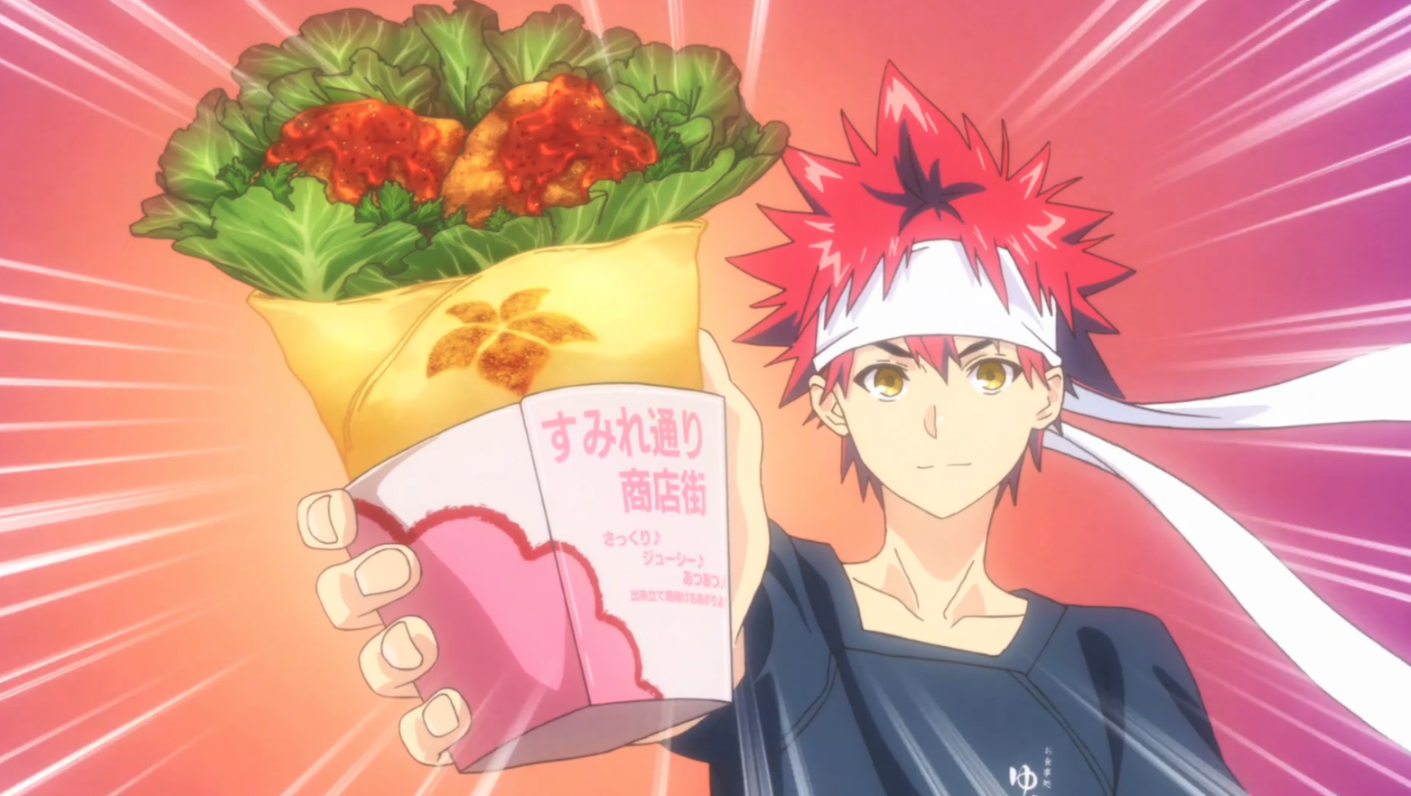 If it’s true that half the experience of eating is visual, then the animes on this list will certainly help satisfy your hunger for treats, pastries, and Japanese cuisine. Their tantalizing recipes and detailed art styles are enough to make you salivate. We wouldn’t recommend you watch any of these five anime on an empty stomach. Don’t say we didn’t warn you.

Food Wars! is an anime series with life-like depictions of tasty bites guaranteed to make your mouth water. The show follows Soma Yukihira: an aspiring chef who is on a quest to surpass his father’s esteemed culinary skills.

Soma’s journey leads him to the prestigious Totsuki Culinary Academy. There he’s forced to overcome grueling cooking competitions and treachery in hopes of making it to the school’s graduating class (and only 10% of the student body makes it to graduation.) Food Wars! depictsdepicts vivid displays of real-life recipes and cooking techniques, which were replicated by popular YouTube channels like BuzzFeed and Babish Culinary Universe.

Although the show features ecchi elements that may be uncomfortable for some (the characters literally experience orgasmic reactions to their meals), the show’s photorealistic gourmet themes make it a must-watch for foodies.

Yakitate!! Japan is a series all about the love of baking bread. This wholesome shonen has detailed depictions of golden baked bread and goods that’ll inspire you to make your own creations. Yakitate!! Japan follows the ambitious Kazuma Azuma, a 16-year-old baking prodigy who aims to create a signature bread for Japan.

With his natural-born gifts (he’s gifted with the legendary “Hands of The Sun,” a hidden talent that allows the dough to ferment faster), passion, and support of his family, he sets his sights on a job with a prestigious Japanese bakery in hopes of creating a bread the citizens of Japan can be proud of! Yakitate!! Japan will warm your heart with its joyful tale and wondrous depictions of golden loaves, savory rolls, and baked goods.

In addition to original recipes included in the show, the series also has culinary bonuses. One example is an outro with actual clips of Japanese bakers making yummy creations and a trivia segment that teaches viewers about food and Asian culture.

This gentle slice of life is about the love of food, family, community, and tradition. For Shirou and his dinner guests, food is more than just mere nourishment: it’s about bringing people together. Today’s Menu For The Emiya Family follows Shirou Emiya, the protagonist from Fate/Stay Night, as he cooks for his friends and family on special occasions throughout the year.

Each episode is based on a different dish, and with each dish comes new lessons in culture, tradition, and food preparation. What we love most about the series is that it doubles as a cooking show: as you watch Shirou throw down in the kitchen, he gives step-by-step cooking instructions so detailed you feel like you’re watching the Food Network.

The show features the eye-catching photorealistic art style we’ve come to love from Studio Ufotable. The vivid depictions of legitimate brands and ingredients make you feel like you’re shopping in a Japanese market.

Where To Watch: Hi-Dive

Yumeiro Pâtissière is a shoujo whose story and characters are as cute and sweet as the decadent treats featured in the show. The show’s mc, Ichigo Amano, is an ordinary girl whose only talents are her advanced palette and natural affinity for sweets. Although for Ichigo, the cake is more than just a snack to satisfy a sweet tooth: it symbolizes art, love, joy, and fond memories of her childhood.

This passion for baked goods earned her a residency at the prestigious St. Marie Academy, where she studies in hopes of becoming a renowned pâtissière just like her late grandmother.  As you follow Ichigo’s inspiring journey as a pastry chef in training, you’ll be awestruck by illustrations of elegant desserts and scrumptious sweets that’ll have you hitting up your local bakeries.

Rokuhoudou Yotsuiro Biyori whisks you off to a Japanese cafe where the serene decor and exemplary service keep customers returning for second and third helpings of desserts, boxed meals, and caffeinated drinks. It depicts the daily operations of Rokuhoudou: a Japanese teahouse inherited by shop manager Sui whose quirky crew and inventive menu take the business to a new level.

Although the guests love the savory dishes and decorated hot beverages, the actual recipe for the cafe’s success is the warmth of the crew and the passion that inspires Gure, Tsubaki, and Tokitaka to go above and beyond for their customers. Yotsuiro Biyori will tempt you with its meals and appetizers while also making you crave a space as warm and inviting as Rokuhoudou. After all, where else can we find a tea shop run by hot chefs that satisfy our hunger while also helping us through our life crises?

You can stream gourmet titles like Food Wars! and Today’s Menu for the Emiya Family on Crunchyroll and Hi-Dive. Itadakimasu!