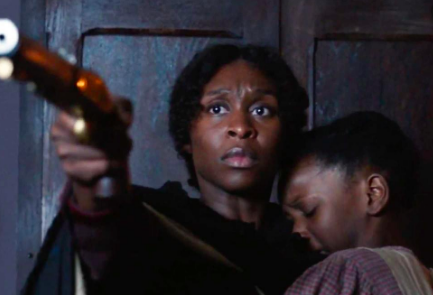 The film chronicles the life and times of Civil War veteran Araminta “Minty” Ross, better known to most of us as Harriet Tubman. I saw the film with my mother in a small theater in the middle of a Republican stronghold northwest of Washington, DC. To my surprise, the theater was full of members of the majority. After my viewing, I called around to find out whether my family and friends had gone or intended to attend. I was disheartened to see that the bias of social media had once again undermined another opportunity to embrace an important figure in United States history. To counter the unwarranted hate that was given, here are five reasons to see Harriet.

1. Harriet had a superpower.

If you are unaware, Minty Ross was seemingly a real life superhero, whose precognition powers helped her and at least 70 soon-to-be-freed slaves get to the North. In the movie, I was a bit taken with portrayal of Tubman’s “spells.” I was initially put off that it might be construed as saying her success was due to anything other than her skill. After doing some research, some have attributed her ability to know that she and her passengers on the Underground Railroad were in peril to an almost fatal blow to her head. Although unable to read and write herself, a biography entitled Scenes in the Life of Harriet Tubman by Sarah H. Bradford reflects interviews with Harriet and others inspired by her efforts. Bradford suggests that Minty’s father had the ability to predict the weather and Harriet’s precognition existed before her blow to her head. It seems that Harriet attributed her ability to God. Another ability stemmed from the strength of her prayers, which came true frequently enough to spark interest and maybe fear in those heathens that kept her enslaved.

2. This is not just another slavery movie.

If you are looking for the obligatory whipping scene, go watch Glory or 12 Years A Slave. While slavery definitely is the backdrop and driver for the drama in the movie, it is not the focus. The focus is on Tubman, who she was, and what motivated her to do what she did. Don’t fear, folks are still picking cotton and the indignity of slavery is still present. There is also an added aspect of the life of free Blacks, which plays a role in this great story of a great lady. Another criticism of the movie is that there are Blacks who helped the slave owners track and capture those who had escaped. It’s true that the movie includes that fact. However, it is not true that the main antagonist is this individual.

3. The film is historical enough.

One of the most ridiculous criticisms of the movie is related to its historical accuracy. With the exception of a few slang dalliances, for the most part, the story seems to get the major aspects right. Harriet was a Black female, born into slavery. The family of her owner failed to honor his will, which was meant to give her her freedom. She was married to a freedman. She freed herself. She freed others as a conductor on the Underground Railroad. She led a raid against the Confederates during the Civil War during the Combahee River Raid. Interestingly, some omissions of note from the film include her collaboration with John Brown before the Civil War. Also, her work as a suffragette is not even hinted at in the film. If you are so inclined, read Bradford’s biography mentioned above. It contains some discussions that the author had with Harriet and letters from other figures of the time attesting to Harriet’s accomplishments. It also affirms the major representations in the film.

The film is directed by Kasi Lemmons, who also co-wrote the screenplay. Another criticism has been the election of a Briton to portray an African-American superhero. Be assured that any hint of Cynthia Erivo’s London background was left far away from the set of the film, the minute Erivo sang a line of a spiritual signifying to the field hands that Minty was escaping. Fortunately, I had opted against reading any reviews about the film, so I became aware of this particular concern after seeing the film. As a Southerner, I was more concerned with the obligatory approximations of our intonations in the labored speech of Yankees or Brits trying just a little too hard to try to sound “Southern,” than the nationality of the actors. My fears were allayed by nary an errant y’all in the whole film, and I believe any concerns about Erivo’s portrayal are quickly removed after the first few minutes.

5. How can you claim to be woke if you haven’t seen it?

Currently, my idea of woke is to consider going natural with my hair, being sure to vote, and explaining for the umpteenth time why Juneteenth should be celebrated. For those of you who have read more, spent time marching against the murder of unarmed Americans, and done more than send snarky messages through social media, you better than anyone needs to understand what real social activism looks like. Harriet is a reminder of what real courage looks like and what service to others in the face of injustice really means.

In any appreciation of art, there is always an inherent bias that informs what we like and don’t like. There are those that look at a painting by Wassily Kandinsky and see wonder. As an engineer, I see an expensive math problem that I should be able to solve. I have forgotten most of the formulas after all these years of non-use, but that does not mean I don’t recognize the benefit of the paintings to inform and inspire others. There are a lot of reasons to not see many of the movies out right now. Don’t let the social media haters be the reason you miss out on a solid film about a real-life American hero.