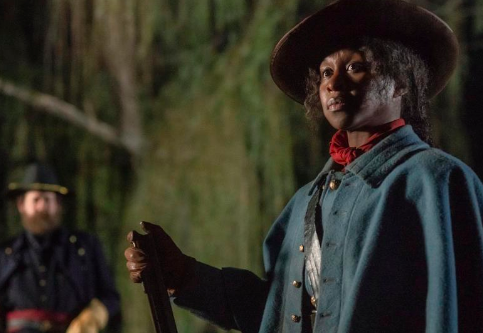 From the beginning, Harriet is a heroic love story — love for her husband, family, freedom, and self.

Cynthia Erivo proves she is the perfect woman for the role of the iconic and historic Harriet Tubman. She’s everything you want in a lead of such a powerful film about a majestic woman.

Born Araminta “Minty” Ross (Erivo) is a slave at the Brodess plantation in Maryland; she marries John Tubman (Zackary Momoh) and soon thereafter, due to the sudden death of her plantation’s slaveholder, Minty learns she is to be sold down South, never to see her family again.

Minty receives one of her possessing premonitions, which cinematically are treated with this sense of witchy magical mysticism that while a tad modern, are also pretty cool and great for story. Minty knows she’s gotta run, and now she’s alone. She quickly confides in her father (Clarke Peters). “Follow the North Star,” he guides her and offers a carved likeness of himself to keep her company. It’s when Minty leaves her beloved husband behind that we know this woman has true grit and that she is not playing.

Minty runs for her life, literally, and as she sprints through the fields, forests, rivers, and swamps, you start to wonder if you’d be able to do this yourself, in any capacity.

When she is trapped on a bridge by the vengefully vexed Brodess son Gideon (Joe Alwyn) and his awful henchmen, Minty climbs over the bridge’s railing, with raging rapids below. Faced with a frightful choice, she declares, “I will live free or die!”

Director Kasi Lemmons (Eve’s Bayou) has done a wonderful job with simply telling this story. The pacing with which she unveils what we already know is gorgeous. We know Harriet is going to make it (and then some); history tells us so. Yet, we’re still pulling for her at every step because we don’t know how she’s going to do it. Lemmons allows the camera to catch Erivo’s beautiful, subtle moments of strength to gut-wrenching vulnerability that come from this master of her craft. (The entire cast is fire, but more on that later.)

Lemmons spent five months researching Tubman’s life. “We all saw it as a female empowerment film, but I really viewed it as an adventure film as well,” Lemmons says. “I was interested in the things that you don’t know about Harriet Tubman. Even though we have in our minds that this must have been an incredibly fierce human being, the images we see of her are almost sweet, right? This was an opportunity to me to present this superhero, a real American hero, this woman who existed outside of the realm of ordinary limitations.”

It’s no spoiler then to tell you Minty makes it the one hundred miles to freedom to Pennsylvania where she meets William Still (Leslie Odom Jr.) of the Pennsylvania Anti-Slavery Society. At his suggestion, Minty chooses a new name for her free self, Harriet Tubman, and begins a new life amongst the integrated free in Philly, including the lovely boarding homeowner Marie (Janelle Monae), who, while cleaning her up, nonchalantly says, “You stink,” to which Harriet replies, “You’ve never had the stink of fear.”

For Harriet, to be free? It’s not enough. Her family should be free, her husband should truly be free, and as she tells William Still of her plan and he tries to say, “Nuh-uh sister, you can’t do that!” she gives it to him straight and says, “I made it this far on my own, you can’t tell me what I can’t do!” This is when Harriet becomes our hero!

She goes back for her kin and becomes a gun-toting badass, buoyed by her determination and faith in what’s right. “God don’t mean for people to own people!”

When Harriet arrives home to get her husband, turns out he’s taken up another wife. He thought she was dead and all, due to the word on the street. While the scene where she learns this news is unforgettably acted by Erivo and Momoh, there’s a part of you that feels like, “Why are we dealing with this annoying ‘Real Housewives’ theme of a Black woman doing everything for a Black man, only to have him end up with another woman?” But then, this is a love story. And sometimes love sucks. Even in the 1800s.

At a certain point (and not that one above), this film gets a little melodramatic and begins to feel like a Lifetime movie — good ole Harriet bursts through the dense thick of the forest, with her hat cocked to the side with her dress hitched for runnin’ and a gun slung across her chest. Costume designer Paul Tazewell, known for this work in the popular musical Hamilton, killed it with his looks for our heroine. If we don’t see girls of all types as “Harriet” this Halloween, Hollywood and the marketing demi-gods will have failed us.

The film is also a poster child for a “Yes” vote for the Reparations bill.

When Gideon’s mother (Jennifer Nettles) explains to the torch-wielding hunters who have come for her, blaming her for Harriet’s slave-snatching success, she explains how she is the victim. She plainly breaks down the numbers. A slave is money, a slave is her worth, a slave is her livelihood. Without slaves, she is destitute. It’s a chilling moment of clarity. Co-Writer Gregory Allen Howard and Lemmons have worked a screenplay and story that deftly weaves in history with today’s reality.

Both Tony winners (The Color Purple and Hamilton, respectively), Erivo and Odom dominate every scene. Vondie Curtis-Hall, of Rosewood, Soul Food, and ER and also Lemmon’s husband, is so effortlessly wonderful in his role as the slave-hiding pastor. Meanwhile, Curtis-Hall and Lemmons’s son, Henry Hunter Hall (When They See Us, Selah and The Spades) steals his scenes as a sprightly, forest-nymph turncoat who goes from slave snitching to saving. Joe Alwyn (The Favourite, Billy Lynn’s Long Halftime Walk), a Brit who knew nothing of Harriet Tubman prior, is terribly fantastic in his brutal role as Harriet’s hunting slave owner, a man driven by rage and love. Omar J. Dorsey (Queen Sugar, When They See Us), a turncoat slave hunter, is a bad mother-shut-yo-mouth and relishes every evil moment. Newcomer to feature film, country star Jennifer Nettles rounds out this cast as the grieving widow and mother to Alwyn’s Gideon; she plays desperation like nobody’s business.

And let’s not forget the music. Grammy Award-winning trumpeter and Oscar-nominated composer Terence Blanchard wrote the score for Harriet, and it literally drives the film, as it should, through moments of emotional heartache, desperation, hope, and even jubilation.

Lemmons has crafted a queen’s tiara with all these gems, so that we as viewers may take this story, this important part of history that is our own, and place it about our heads with pride. You will feel this way when you leave this film. You will feel inspired, you will feel empowered, you will know someone fought for you to be here, that you belong and you will walk tall — as you should.

Harriet is mystical, a superhero, and Black-girl magic wrapped in an epic history lesson of a figure who should have been covered to this scale and skill long ago. Filled with inspiration and moments that evoke pride over prejudice, it is a necessary film for everyone.