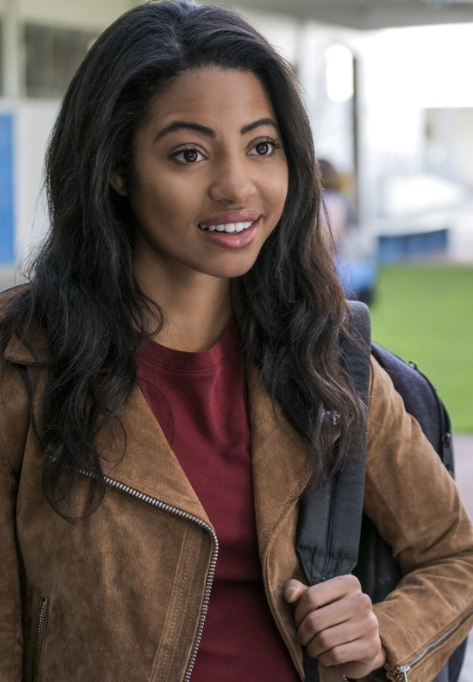 While everyone this past weekend was glued to their TV sets watching season two of Stranger Things, I decided to binge watch both Stranger Things 2 and another Netflix original series called American Vandal.  Okay, so let me tell you briefly how I got connected to this show.

About a little over a month ago, when I was flying out to Toronto, on my flight I saw this guy watching what looked like some kind of documentary on his iPad. I was bored from reading my book and my eyes wandered over to his screen.  Any other time, seeing something as mundane as a talking head in a documentary wouldn’t pique my interest—but suddenly I saw images of penises (or dicks if I may be so bold to say) drawn over several vehicles in the parking lot.  And it was at this moment I was thinking, what the hell is this passenger looking at?

He had his earbuds on and he was too engaged in what he was watching to notice I was looking over at him, and I also didn’t want to interrupt his TV viewing, so I decided to leave him alone.  I put a mental note in my head to “Google” what that guy was watching and try to figure out where to find it on my own.

Fast forward to this past Friday, when I attended a company outing at work over nachos and margaritas, when my co-workers were talking about true crime shows like Making A Murderer.  My co-worker brought up this show that she heard about called American Vandal and then she said it was a show about penises and vandalism. The dots were finally connected and shortly after binge-watching Stranger Things 2, I watched American Vandal and this show is A-MAY-ZING.

Now that I’ve shared this anecdote with you, here are my five reasons why you should check out American Vandal.

I didn’t know until now how much I needed this genre in my life.  I’m a fan of true crime shows, not die-hard but I listened to the podcast Serial (season 2 sucked) and I’m also a big fan of the mockumentary genre.  However, this series does something phenomenal by mashing up two popular genres (especially true crime since it’s all the rage) and create a comedic narrative solely based on phallic imagery and destruction of private property. Who knew that drawing a bunch of dicks on 27 cars and making it into a whodunit plot would be so compelling? 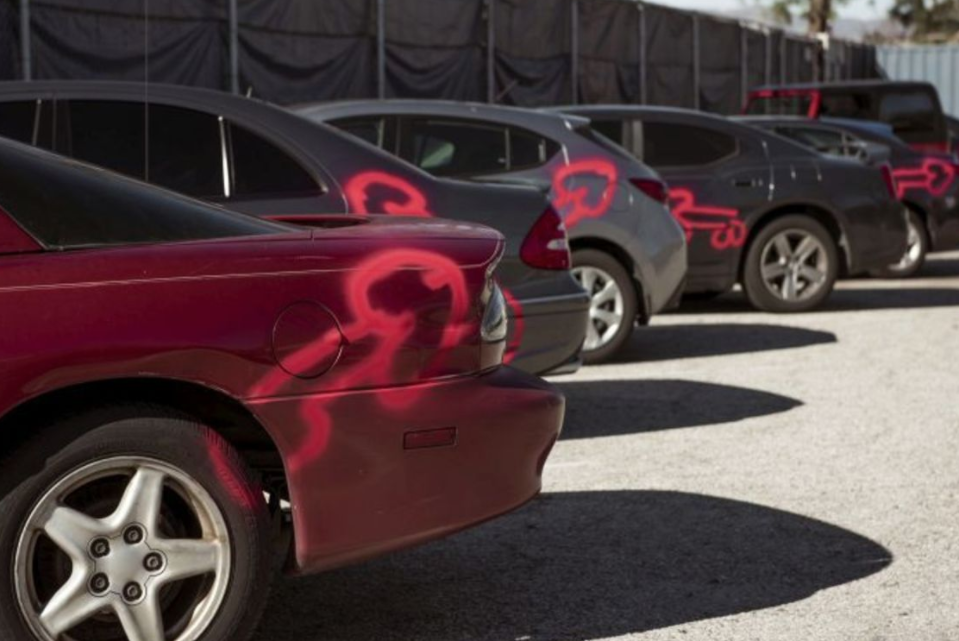 2. The Characters Are ALL Relatable

Often times you can pick one or two characters you can identify with.  On Golden Girls I’m more like Rose and on Girlfriends, I’m more like Joan. I would even say in Stranger Things, I’m a combo of Dustin and Lucas. But in American Vandal, each character has a piece of their idiosyncratic personality fused into my own and I’m not sure how I feel about that.  I can totally relate to Peter Maldonado, the geeky filmmaker behind the documentary.  I also went to film school and remember spending days and nights letting movie making consume me.  I also can relate to the lead protagonist and main suspect Dylan Maxwell.  He’s a douchebag, but he’s also seriously misunderstood.  There’s more to him than just his YouTube prank videos and living a life as a stoner.  He’s loving and loyal to his girlfriend and he also doesn’t want to appear as if he’s stupid or inarticulate.  There’s a fantastic story arc that comes full circle in his character development that we get towards the end of the series that makes you feel so much damn compassion for Dylan, that you feel like you could have been in his shoes. 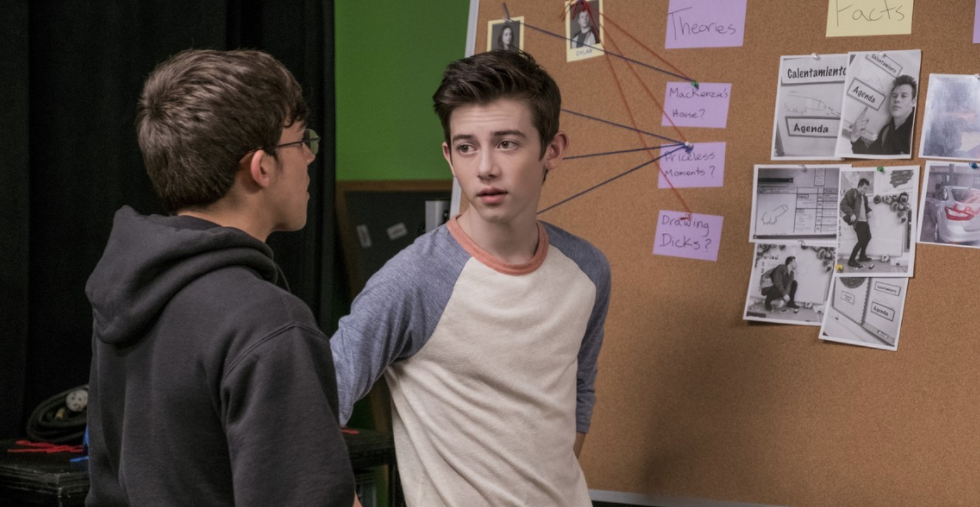 3. The Theories Are Bananas!

Okay, so I’m not one for puzzles and hashing up crazy conspiracy theories within the dark corners of the internet when it comes to trying to break down a mystery to a show.  However, on American Vandal I found myself searching the interwebs trying to break down what I just saw and figure out who is actually responsible for drawing those 27 dicks?  Dylan is obviously the red herring, his girlfriend Mackenzie has a strong motive, his Spanish teacher who hates him Ms. Shapiro could also use her vendetta as a way to frame him and there are a plethora of possibles that point in every single direction EXCEPT Dylan who is our main suspect.  Spoiler alert: We never found out who drew the dicks. The show was recently announced for a season 2, so my best guess is we will find out then.  WE BETTER. 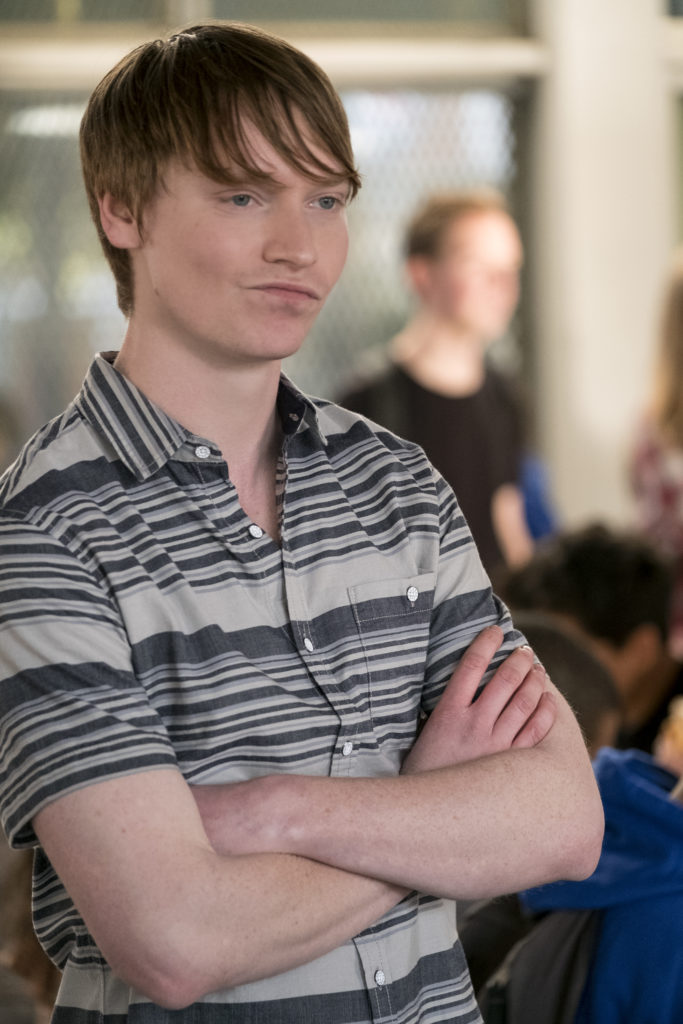 There is this super nerd called Alex Trimboli, and let me tell you, he is the heart and soul of this show.  Without spoiling too much, we have ALL met an Alex Trimboli in our lives.  He’s that guy that lies to impress, exaggerates to appear superior, and is incessantly seeking the approval of others at all costs.  He’s also the key witness in the alleged vandalism by Dylan Maxwell.  However, his own integrity and honesty are called into question when he claims he received a hand job from Sarah Pearson and she vehemently denies it.

American Vandal averages 30-35 minutes per episode with only 8 episodes to boot.  So you’re looking at a binge time of 4 to 4 1/2 hours.  You still have the rest of your day to binge watch another show (like I did) or spend the rest of your day doing something crazy like going outside and smelling the fresh air and looking at the clouds.  It’s easy to knock out the episodes at once, or if you want to pace yourself, you can do that too.  Just beware that each episode’s cliffhanger at the end makes it incredibly difficult to resist hitting the stop button.

So there you have it!  My 5 reasons why you should check out American Vandal which is currently streaming on Netflix. Enjoy!