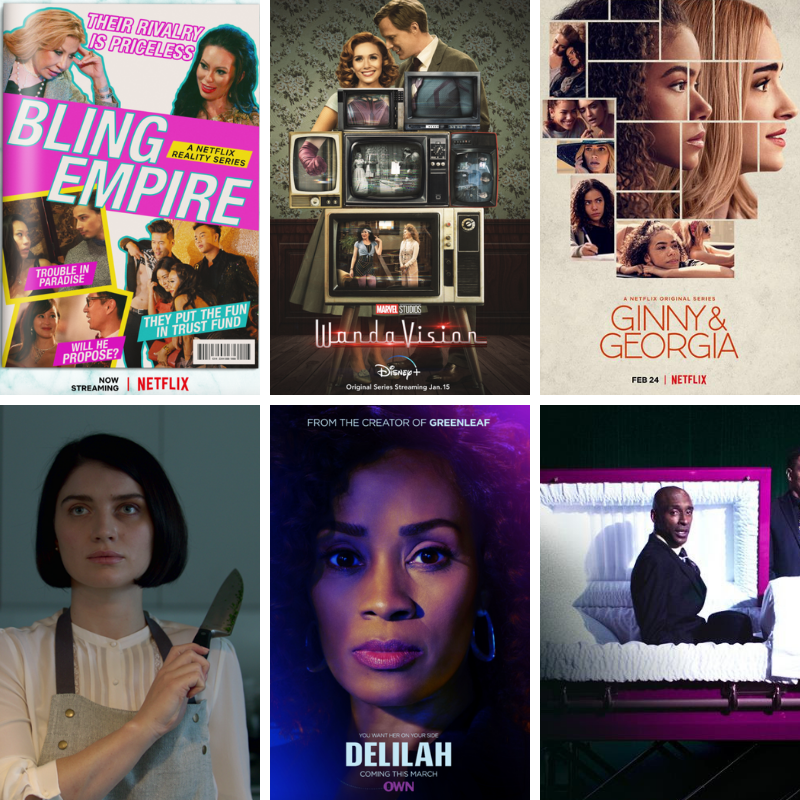 While some of these TV series have yet to debut, others have been around, however if you haven’t heard the buzz or had time to meander through your streaming channels, here’s the low down.

Spooky. When newly divorced single mom Louise (Brit actress Simona Brown, Roots, Kiss Me First) runs into a handsome man (Tom Bateman) at a bar, she’s not looking for love but finds herself drawn to him anyway. They kiss, but before anything else can happen, he has a quick change of heart and leaves her outside the bar.

Next day, wouldn’t you know it, he’s her new boss at the office where she works. Despite the embarrassment of the night before, new boss and secretary make a fresh start and little more is thought of it until by coincidence she meets his wife (Eve Hewson, The Knick) on a London street.

Pretty soon Louise has become friends with both of them. But, as Whoopi Goldberg once said in Ghost, “You in danger, girl.” There’s a death match of sorts going on between David and Adele, and they are about to take Louise along for the ride.

Behind Her Eyes debuts February 17 on Netflix.

Buried by the Bernards

I’m not a big reality TV fan, mostly because I want my entertainment to be as far away from real life as possible. However, you want a quick laugh and the idea of a mortuary doesn’t creep you out, then this is worth a few minutes of your life.

In business since 2017, R. Bernard Funeral Services in Memphis, Tennessee, is a full-service family-run funeral home that includes a drive through (and this was pre-COVID!). There’s owner Ryan Bernard, his two daughters Deja and Raegan, his mom Debbie, and his uncle Kevin.

Check out mom Debbie, because she’s the comic relief — a woman who has convinced herself that she and she alone is holding down the business. Deja and Raegan complain and display some stereotypical millennial traits (flat out refusing some tasks).

Meanwhile Uncle Kevin is absent minded and talks to himself but has the moves of someone who’s seen some hard times and is grateful for the stabilizing factor of family and a steady check. And Ryan, part Mack Daddy/part serious businessman takes it all in stride.

Buried by the Bernards debuted February 5 on Netflix.

The Revry channel streams LGBTQ+ content, and for Black History Month there’s a plethora of content to choose from. One is My Trans Life, with half-hour looks into the lives of transgender and transsexual people, each story different and compelling.

My Trans Life is in its third season, so there is a lot to binge. It streams on Revry.tv.

Can’t yet really reveal plot lines in episodes but can reveal the premise that appeals.

Georgia (Brianne Howey, Dollface, The Passage) is a blonde, Southern peach with two kids. Her daughter Ginny (Antonia Gentry), short for Virginia, is almost as old as she is, as Georgia was a teenage mom. Ginny is biracial while her little brother (Diesel La Torraca) is white. Both love their mom but also think she’s a little strange.

While one could argue that sometimes kids think that about their parents, in this case, Georgia often proves them right. Hijinks ensue in this dramedy where Mom is sexy, loves men and wraps them around her finger, while still loving her children and showing them a few things about survival.

This is not a review of Delilah, only a preview. There. This is also not OWN’s sequel to Greenleaf (soon to come). Instead, it is the story of two friends, both lawyers, who find themselves on opposite sides of the law. Delilah (Maahra Hill) left her big firm to work for herself defending smaller clients in need of help. Her friend Tamara (Jill Marie Jones, Girlfriends) usually represents the privileged and powerful. What happens to their friendship and their lives when they finally have to square off in a big court case? Ozioma Akagha (Runaways) and Susan Heyward (Orange Is the New Black and Vinyl) round out the cast. Just sayin’, this could be good.

We all know the story, told so many times. Annie Mae Bullock from Nutbush, Tennessee, finds she can sing and meets a guy named Ike. They start a group, marry, and he becomes abusive throughout the marriage, music, and worldwide fame. She wrote a book about it called I Tina, and Angela Bassett portrayed her in an award-nominated, critically-acclaimed film, What’s Love Got to Do with It.

For Turner fans, HBO’s Tina will not change much of the above but it will add “archival footage spanning 60 years, audio tapes, and personal photos” and interviews with Angela Bassett; Oprah Winfrey; and journalist Kurt Loder, co-author of Turner’s book.

You might want to watch this because Omar Sy is fine or because you have a thing about anything set in France. Before long though, it’ll be because you can’t take your eyes off the action in this tight mystery thriller. After 14-year-old Assan Diop (Sy) loses his immigrant father who commits suicide while in jail on trumped up charges, he wants revenge and finds his way through a book his father left for him on the exploits of Arsene Lupin, a 19th-century fictional character whose mastery of detective work, disguise and deception earns him the moniker “gentleman thief.”

Over time, the adult Diop becomes like Lupin, stealing from people who’ve become wealthy through ill-gotten gains while trying to find a way to make the family who falsely accused his father pay. He’s also fallen in love, married, and is a father, and this certainly complicates things. Ludivine Sagnier (The New Pope) plays Diops’s long-suffering estranged wife, Claire, while newcomer Etan Simon plays his son.

Instead of blood and gore violence, there’s lots of hold-your-breath chase scenes by car, by foot, and disguise-disposing faster than … well you get the idea.

Bling Empire is a look into the LA lives of wildly rich Asians and Asian-Americans. We know them as Anna Shay, the wealthy, middle-aged divorcee with Russian roots; the social-climbing Christine Chiu; Silicon Valley heiress Jamie Xie; heir and entrepreneur Kane Lim; entrepreneurial producer/investor Kelly Mi Li; and the not-independently wealthy model and influencer Kevin Krieder. The fun part is watching these designer-clad friends flutter from one mansion to the next, one five-star restaurant to private jet and private club, while navigating the hot mess that is their lives.

BGN is already recapping WandaVision so all I am going to say is watch this if you like classic TV shows such as I Love Lucy, Bewitched, or I Dream of Jeannie. If you have never heard of those but are a Marvel fan and know that Scarlet Witch is aka Wanda Maximoff (Elizabeth Olsen), this will probably pique your interest.

This mashup series that places Wanda and Vision in classic sitcom (complete with laugh track) set in an overly idealized suburban town is the clever beginning to what may be a send up of all those old shows (well, it is) but also an epic opportunity to tell another Marvel superhero story, and perhaps hints of what’s still to come.

WandaVision is currently streaming on Disney+.

So, take a moment away from Zoom and after your workout, or dinner, stretch out and enjoy!