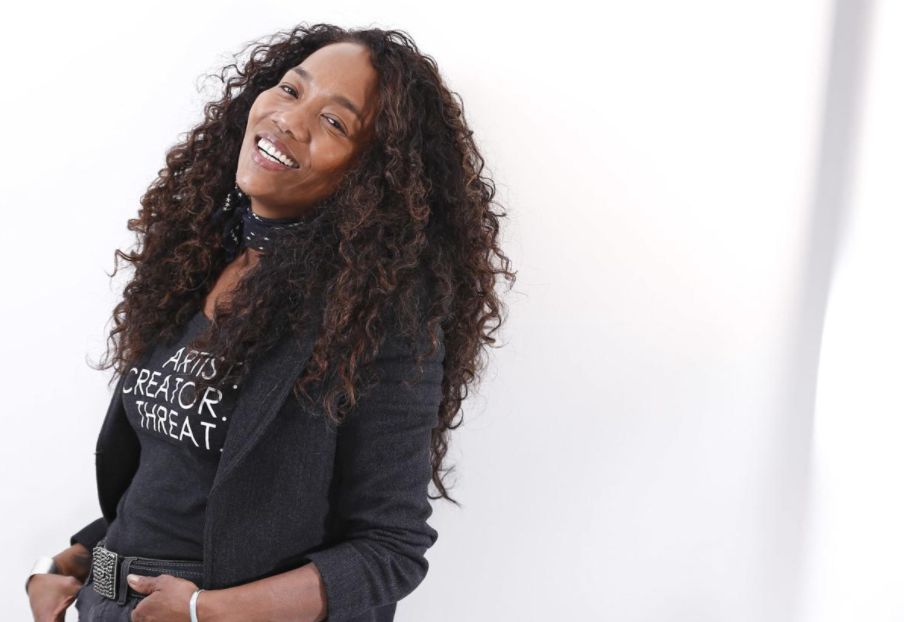 The Slow Hustle is a chilling documentary that recounts the investigation of the death of police detective Sean Suiter in Baltimore, Maryland, on November 15, 2017, directed by Sonja Sohn. For six seasons, Sohn played detective Kima Greggs on The Wire and has formed a special connection with the city of Baltimore since playing that role. She founded an outreach program that worked with at-risk youth, and her first documentary, Baltimore Rising, chronicled Baltimore’s attempt to grapple with the death of Freddie Gray. The same year Baltimore Rising premiered on HBO, Baltimore found itself dealing with the death of Detective Suiter, a highly regarded Black police officer. BGN met with Sonja Sohn via Zoom to learn more about The Slow Hustle.

An executive at HBO knew that Sohn was embedded for years in Baltimore filming her first documentary. The executive was following the gun-trace Task Force corruption cases and the mystery around Detective Suiter’s killing. The exec felt compelled to ask Sohn if she thought there was a story there. Sohn remembered, “Initially, it wasn’t something I wanted to pursue. I had been in and around law enforcement quite a bit for Baltimore Rising and even though it wasn’t a cop film, that energy was very triggering for me and I didn’t want to just dive right back into it. In 2020, with George Floyd’s murder and the onslaught of public attention, the world started to feel the same vibration I was feeling while shooting Baltimore Rising. Then the gun trace Task Force case had come up, and the Suiter story started to emerge. The last thing I wanted to do was go touching that energy again. But after about six months, when I was given the opportunity, I decided to just go and see whether I could bring something to the story. And when I met Nicole [Suiter, Sean Suiter’s widow] and spoke to some of the investigative reporters, I knew I could take this on with their help.”

The Slow Hustle immediately draws the audience into the complexity of Baltimore and leaves us with more questions than answers because Detective Suiter’s killing hasn’t been solved. The film gives us layers of complexity about policing. Detective Suiter is Black and was killed in Harlem Park, a Black neighborhood. When the police came in to investigate, they occupied the area as if it were a military invasion. The majority of the people who were controlling the investigation were Black, which gives layers of complexity to this documentary that hit up against the binary systems that even Black folks in power in Black cities don’t want the public to see.

We asked Sohn what it was like for her to balance all of that complexity as a director as she told the story. She replied, “This was a challenging documentary to make. I have to give credit to the team of people who put it together. It’s the kind of film that is tricky because I know what’s happening in Baltimore right now and what was happening in Baltimore then. Not denigrating where Baltimore is now and the possibilities it has now was challenging. But we had to tell the truth of the time then. Using the voice of the people in the city was always important. The inspiration of the documentary comes through the voice of the people within it. That lights a spark in me. Then a structure forms and sends me on a journey. I’m not here to make this a reality show, a gotcha moment, but we got to tell the truth here. And if you’re about honoring the truth, then there’s a story that can be told. Can we tell the truth together? Can we honor the truth together? Doesn’t mean we’re always going to agree, but it means that whatever shows up on the screen hopefully we’re all in alignment with.”

Part of the reason The Slow Hustle is able to hold the complexity of Baltimore is the majority of the film is told through the voices of the crime reporters who live and report there. Sohn said, “I was trying to balance my own perspective. There was a true mystery here. I know Baltimore, how it operates, and what was going on there with law enforcement. I wasn’t ever convinced that we were going to get to the answer, but if we were going to get close to an answer, we were going to need people who understood how to investigate for a living. I’ve run across Jane Miller, D. Watkins, and Justin Fenton in years past through all the work I’ve done there, so those relationships came into play. It was a benefit of having been in the community for so long and knowing people. Journalists are skilled at taking that journey because their job is to be neutral, so when they question something, it resonates in another way. When the community is questioning,  just finding out where the intersection is can be a bit sticky but very interesting. It was important to have that aspect to our story because that’s humanity. We had to put everything we could in the film to contextualize the story, particularly if we’re not going to come to a conclusion.”

We closed our conversation with this multi-hyphenate artist by asking the question what right now is bringing her the most joy. She responded, “Really just embracing being in the midst of what may be the greatest transition of my life. I’m in my 50s; I’m rounding that bin. As a woman at an age where they like to put us out to pasture, I feel like there’s something coming through and there’s a joy to meeting the challenge of that. It doesn’t mean it’s comfortable, but the joy is knowing that in meeting that challenge there is something that is evolving. I can see bits of it every day, so yea, I’m really excited.”