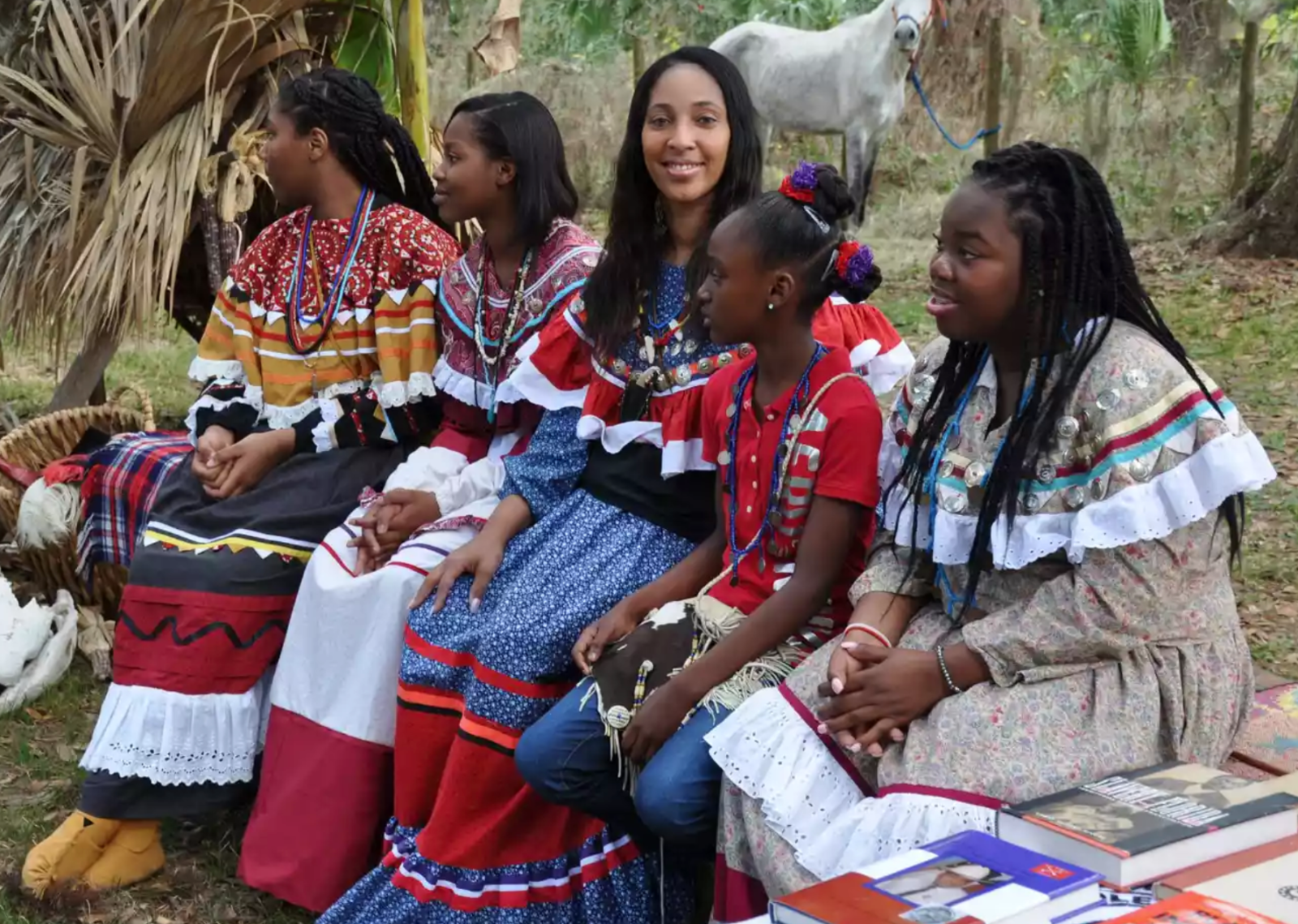 November is, in addition to American Thanksgiving and a time to appreciate the sacrifices of military families, Native American Heritage Month. This is a time to celebrate the myriad of Indigenous tribal and ethnic groups, languages, and customs. Among these many complicated ethnic identities created over millennia of migration, settlement, and, in the past few hundred years displacement, are the tribes most non-Native Americans can name: Sioux, Navajo, Cherokee, and Apache.

Besides these groups, many smaller, federally-recognized tribes don’t often get as much recognition: the Shawnee, the Mi’kmaq, and the Maidu. Beyond that, there are indigenous ethnic identities that tend to escape the American imagination entirely. One is that of the Black-Indigenous person. These are people of both African and Native descent or belonging to creolized ethnic groups that, over centuries, have blended parts of African-American and Native-American identities and practices into new, distinct cultures.

Among these Black-Indigenous cultures is that of the Black Seminoles.

The name Black Seminoles is historically and tribally the accepted name for persons of African descent who aligned themselves with the Seminole Indian tribe of Florida. In the early 1700s, Gullahs, formerly enslaved persons from America’s Southeast colonies, escaped the marshes and swamps of the Florida peninsula.

Here, they encountered a band of Native Americans who were likewise formed by displacement from their homes. That group, comprised of Creeks, Yuchis, Yamasses, and other Native tribes, came to be known as Seminoles. The name Seminoles means wild people or runaways since they were also escaping the burgeoning — and often brutal — American enterprise.

The First Seminole War saw so much participation by Black and Native warriors that then-General (and later President) Jackson commented that the conflict was, indeed, an “Indian and Negro War.” From there, however, things changed.

The Seminole resistance could not withstand the American advance. In 1842, the US Army forcibly removed the groups to present-day Oklahoma. In Oklahoma, then known as “Indian Territory,” Black Seminoles were put under the control of the non-Black Natives they had previously worked with. Black Seminoles, the descendants of escaped Gullahs and “maroons,” were enslaved once again.

This second enslavement did not last for many Black Seminoles, however,in 1850, Black-Native man John Horse led Black Seminoles and other Native Americans into Mexico. Mexico outlawed slavery in 1829. It was in this country that Windy Goodloe, secretary of the Seminole Indian Scouts Cemetery Association (SISCA), says the Black Seminoles encountered a federal government that kept its promises.

For twenty years, many Black Seminoles lived in Mexico while others stayed in Oklahoma, under enslavement. This enslavement ended in 1866 when the Seminole Nation, along with the four other “Civilized Tribes” that fought with the Confederacy, freed their slaves and subsequently granted them full tribal membership. This development, along with requests from the US federal government to fight for them in frontier wars led the Black Seminoles in Mexico to cross the border again on July 4, 1870, to eventually form the US Army’s Seminole-Negro Indian Scouts Detachment.

Once again employed as warring frontiersmen, the Black Seminoles were based in Fort Clarke, Texas. They fought battles against other Native bands, fighting the Comanche and Apache tribes over Texan territory and ultimately, creating space for more white settlers to build homesteads.

Most skirmishes lasted from 1881 to 1887, with Goodloe estimating that about 12 battles made up most of the unit’s record. From then, though, she says the unit was pretty active for twenty years. Technology was changing, and the group’s warriors were resistant to it, preferring to remain scouting on horseback rather than train on bicycles.

Finally, the US Army disbanded the detachment in 1914. The West was won, and the Black Seminoles had served their purpose. Since, as Goodloe says, there were no written contracts between the Army and Seminoles, promises did not have to be kept. The Black Seminoles were not provided permanent settlements in Fort Clarke or nearby Brackettville. Another diaspora ensued.

Since 1914, Black Seminoles have settled in various places across North America. After the Army disbandment, some families returned to Nacimiento while others moved to various places in the US. Despite working for the US government under the banner of “Indians,” Black Seminoles as a specific ethnic group have not received federal recognition as a tribe, and are, therefore, not entitled to any rights of a federally-recognized tribe.

The problem, according to Goodloe, is that Black Seminoles will not drop the “Black” part. As she says, “it’s very important to say Black Seminole.” To do otherwise would be disingenuous and a denial of a specific history and identity. Additionally, the US government and even the Bureau of Indian Affairs seem to find “Afro-Indigenous” an oxymoronic phrase. They seem to believe that people are either one or the other.

Despite this, Black Seminoles are facing similar challenges to other Indigenous cultures. The Afro-Seminole Creole language is nearing extinction thanks to forced assimilation and a premium being put on English in schools. Like other Native groups, Black Seminoles are combating a narrative of erasure, the idea that Indigenous people have all gone to make way for America. They are doing so with events like the Seminole Maroon Family Reunion and preservation societies. Speaking of the cemetery association and the Black Seminole Scout museum, Goodloe says what their aim is: “What we’re doing is reminding people we are here.”

The Black Seminole story continues, just as the Navajo and Apache stories do. Thankfully, these ever-evolving stories are entering the American mainstream, with sitcoms and hit shows about the multifarious forms of Native life becoming a part of the cultural conversation. What’s more important is that these are Native stories by Native people.

As Goodloe says, “it’s important to find your voice.” Acknowledgment of the diverse voices of Black Seminoles, in addition to all other marginalized articulations, can only add to the sometimes messy, always interesting discourse that ends up forming America. To do otherwise would be to lie about what our nation really is.