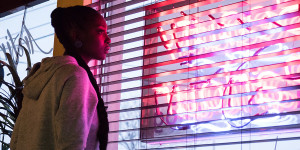 The Drop In is an Afrofuturistic action drama, written and directed by Naledi Jackson, The Drop In stars Mouna Traoré (Murdock Mysteries, Brown Girl Begins) as Joelle, a young hairdresser, and Oluniké Adeliyi (Working Moms) as Grace.

The film begins fairly quietly; as Joelle is cleaning up after a busy day, a woman enters the salon, asking for a touch-up to her braids. Upon examining her hair, Joelle notices “HS 149” tattooed on the back of the customer’s (Grace) head, and becomes distressed.

It is revealed Joelle has a past she is hiding from, one that Grace has been sent to bring her back to. As Grace tries to convince Joelle to go back, she repeatedly refers to her as being “illegal”, and that she is just pretending to be someone else. Joelle must make the choice to go willingly, receive forgiveness for her desertion, or pay a steep price for resisting.  What follows is a fight sequence that delivers not only exciting choreography, but true surprises and plot twists, all leading to a finale that will make you wish for more. 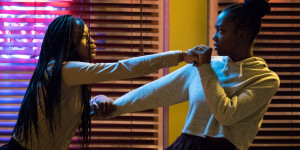 Mouna and Oluniké have amazing presence, their ability to convey the various emotions of the characters are subtle, but impactfull. I want to know more about them. What in Joelle’s past made her run as far away from it as she could, and what makes Grace faithful to that same history.

In 2017 the idea of what it means to be an “illegal immigrant” has become a hot-button topic, and Jackson tackles it in a very subtle and profound way. As an Afrofuturistic action drama, The Drop In has a central theme that focuses on immigration. What it means to be “illegal”‘ in today’s society, and the yearning to be accepted as we are and not where we came from. 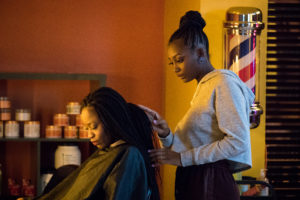 As with any festival, there are often films that initially fly under the radar, but eventually gain the attention of everyone. I have a feeling Naledi Jackson has created such a film in The Drop In, and I can’t wait to see what people have to say.

Executive Produced by Daniel Iron, Produced by Priscilla Galves and Foundry Film Inc., The Drop In will have its world premiere at the Toronto International Film Festival on Monday, September 11, 2017.