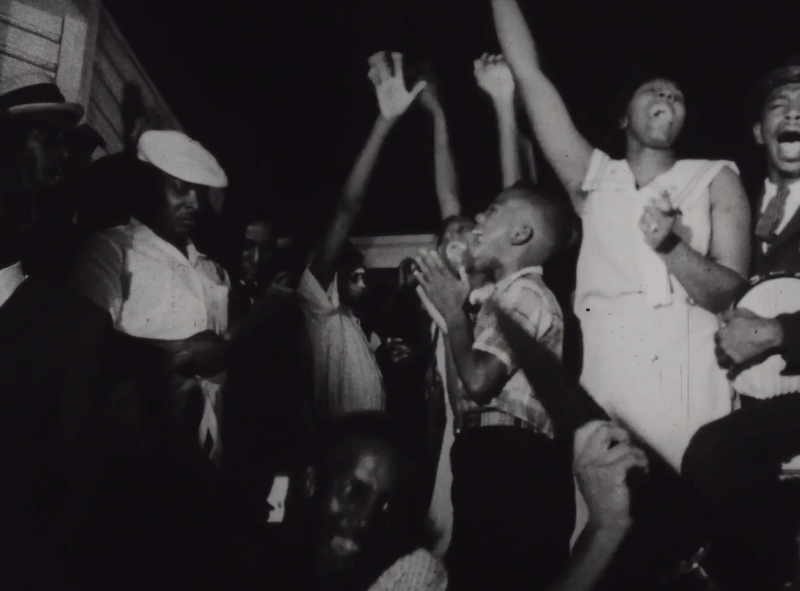 Wharlest Jackson Sr. was a husband and father of five who worked three jobs to support his family and was treasurer of his local chapter of the NAACP. In 1967, while driving home after working overtime from his factory job, he was murdered. Someone took his life by placing a bomb on the driver’s side of his car.

As the story of the NAACP coming to Mississippi to protest Wharlest Jackson’s death is told, the audience is taken on a familiar journey: Black folks organize to vote and white Southerners organize to shut it all down with terrorism. Footage of members of the Ku Klux Klan brazenly parading around town in their hoods and robes, faces exposed, and openly threatening Black people at their Klan rallies is jarring, but in American Reckoning, the audience witnesses Black Southerners with guns ready to protect themselves and their property unapologetically. Directors and producers Yoruba Richen (The Killing of Breonna Taylor, The Sit In: Harry Belafonte Hosts the Tonight Show) and Brad Lichtenstein (When Claude Got Shot) show viewers a side of Black resistance not often seen. American Reckoning takes the audience on a civil rights emotional roller coaster that thankfully ends with a sense of hope.

Three years before Jackson’s murder, his friend, co-worker, and NAACP local president George Metcalf was severely injured when a bomb was placed under the hood of his car. As the Black community organized to peacefully protest the murder attempt, they also armed themselves for protection. A high point in American Reckoning is when the film turns its lens to the Deacons of Defense and Justice. A group of Black men travel from Mississippi to Bogalusa, Louisiana, to meet with the Deacons to learn how to organize themselves to protect their community by openly practicing armed self-defense.

Black people arming themselves to protect their families in the South is not a new phenomenon. There’s a wonderful montage of historic paintings and photos of Black resistance in America from the 1600s to the 1960s as professor Akinyele Umoja (author of We Will Shoot Back) shares that Black communities taking up arms to protect themselves with force was not an unusual notion. The notion of non-violent protest was unusual. Your usual civil rights documentary from this time period would show Black people stoically sitting at lunch counters while screaming white people pour hot coffee on their heads or Black people getting beaten and knocked over by fire hoses while bitten by German shepherds. There is none of that here. Nah. We see brothers with shotguns ready to protect their families against the Klan. We see Black women, children, and elders peacefully protesting while protected by Black men. Seeing the footage of Black men in this time period organizing in barbershops and in Black neighborhoods prepared to defend themselves is inspiring. I wish there could have been more about the Deacons. I really loved this part of the film.

American Reckoning is also a heartbreaking chronicle of the continued injustices faced by Jackson’s family who, for over fifty years, have tried to get the American justice system to find and prosecute the men responsible for their father’s death. The Jackson family is just one of thousands of Black families who dealt with the consequences of their loved ones being murdered for just wanting to live head held high with human dignity during Jim Crow. According to the documentary, in the late 1960s in that area of Mississippi, there were over 46 unsolved murders of Black men, women, and children. The documentary alleges these were possibly at the hands of a select club within the KKK. John Lewis has a meaningful cameo appearance late in the documentary, which makes this family’s journey even more compelling.

American Reckoning is a part of FRONTLINE’s Un(re)solved initiative, a series of documentaries that showcase the federal government’s investigation of over 150 cold cases from the civil rights era. Un(re)solved includes a podcast, a web-based interactive experience, and a live traveling augmented reality installation.

American Reckoning reminds viewers of Black communities’ unstoppable ability to protect themselves and advocate for justice. This way of life has always been how Black people have lived in America — connected to resilience and authentic power no matter what. Although American Reckoning is very tough to watch at times, the end left me feeling inspired, ready, and able, knowing that Black resistance lives in our bloodlines.

BGN Film Review: ‘Tell Them We Are Rising’

‘The Hollow Crown: The Wars of the Roses’ is Phenomenal