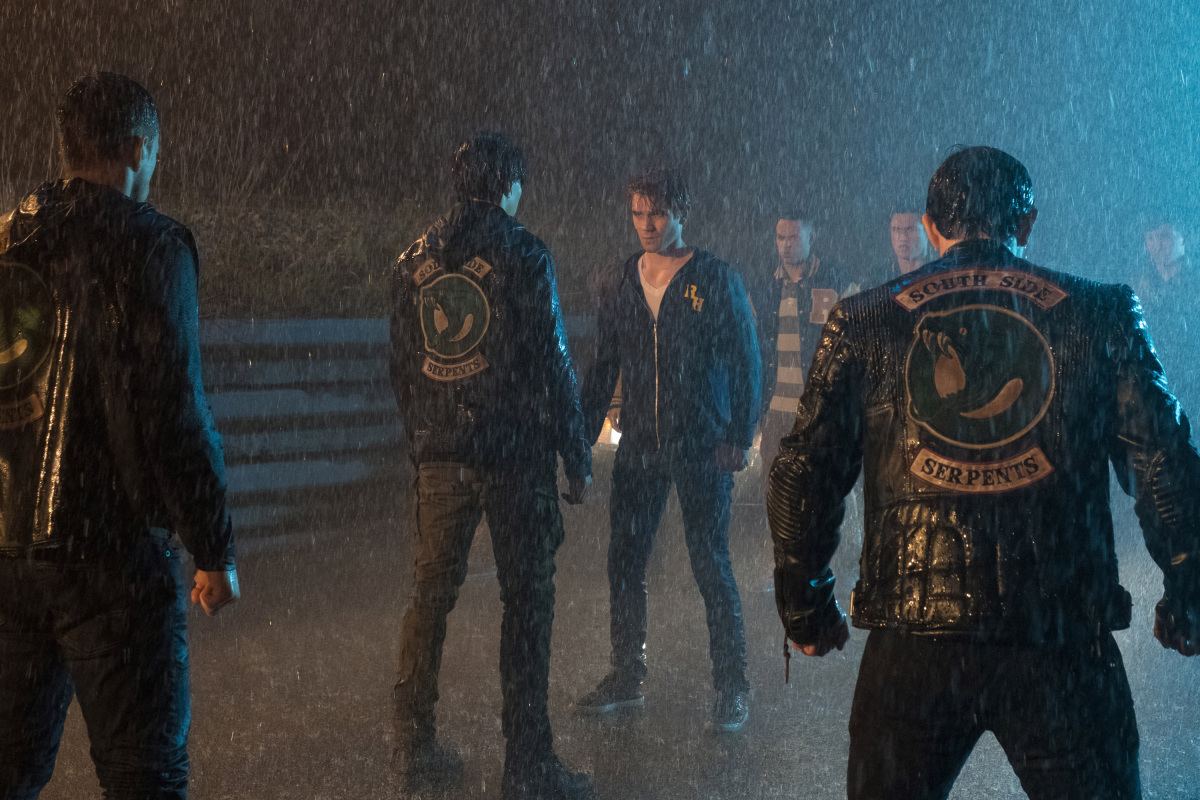 Archie’s quest to take on Riverdale’s own Black Hood shouldn’t be as stupid as it is. The whole Teenager Taking On A Dangerous Entity is a big part of the young adult genre, huge even, but none of Riverdale’s kids are Katniss Everdeen. They are painfully average teenagers who are woefully out of their depth. Archie’s need for revenge makes sense, but you’d think — you’d think — he’d try to be smarter about it. This makes “The Town That Dreaded Sundown” both awful to watch and a relief. After a rainy, slow-motion fight sequence (where you might wonder if someone will burst Michael Jackson’s “Beat It” or simply start dancing like in Step Up 2), Archie finally gives this idea up.

I’ll credit Riverdale for not trying to make Archie look cool while he’s acting out. He’s awkward throughout, shakily pulling that gun on the Serpents (Archie with a gun is a strong gun control argument) and determinedly, but not confidently, holding his ground before their fight. Archie totally believes in this mission, but Riverdale doesn’t forget that he shouldn’t (and probably can’t) do this. And Archie realizes it himself by episode’s end. So I’m cutting him a little slack, but the lack of instincts coming from the usually solid Veronica cannot be abided.

I suppose Archie and Veronica skipped Common Sense and Self-Preservation class to hook up in a broom closet because Veronica spends most of the episode acting like she’s never made sense before in her life. The Lodges are going the same route as the Coopers last season, with Veronica flip-flopping between trusting and despising her parents in equal measure, and likely to be forgotten entirely by the time season three rolls around. This didn’t work with Betty, and it’s not working now. I’m already tired of watching Veronica distrust her dad one day, bend over backward to appease him the next only to come back around to thinking he’s the devil of Riverdale. Girl, just pick one.

If this wasn’t bad enough we also have to watch Hermione, of all people, lecture Veronica about the dangers of blind loyalty. At the very least, we can comfort ourselves with the fact that it’ll be really hard for anyone to make less sense than Hermione Lodge. If you ignore Hermione’s hypocrisy, this lecture is desperately needed, since Veronica went from calling Archie out for antagonizing a killer to making t-shirts to support him in doing so. All that being said, I forgave her real quick when she found Archie’s gun and told him how bad this idea was. Then she keeps him from being beaten to death by the Southside Serpents in that dumb street fight. And throws the gun in the river. Just as Veronica Lodge would do.

Somehow, somehow, the only people making sense are Jughead and Betty. Jughead stays right in his lane and cracks open some true crime novels. And Betty gets to work cracking the Black Hood’s secret code after he confesses to being inspired by her Jubilee speech. Sure, it’s probably a bad idea to keep this a secret in the long run, but Betty’s rationale for doing so (not wanting to be blamed by her neighbors and especially by Archie) makes sense, and the immediate consequences don’t force us to watch Betty pretend to be Liam Neeson. Rather, Betty gets to save everyone at the Town Hall meeting just by pulling the fire alarm. Snaps for you, Betty.

This appreciation isn’t to be confused with Bughead’s relationship drama, which is like watching paint dry. I appreciate the effort to give them more to butt heads about than the arrival of a cute and spunky Toni (we’ll get there, I’m sure), but this cheap edition of West Side Story isn’t coming together. After a full season exposing the cracks in the facades of Riverdale’s elite, Betty still finds time to be judgmental (very in character for her) and blames the Southside for Riverdale’s downturn, for the Black Hood, for global warming, that one bad season of Grey’s Anatomy, and for President Trump (you know Alice Cooper voted Trump). Sure, the Southside is perpetually gray, but the memories are so selective in the Northside that their water supply can’t be at one hundred percent.

Toni gives Betty a much-deserved dressing down, but it’s not like Riverdale does a whole lot better. Toni’s the exception to the show’s own rule: the Southside’s residents are bloodthirsty, amoral, and in need of a shower. Instead of allowing Jughead to get to know them, he avoids them. The only time we see them this week is when they’re planning on knocking Archie around, hoping the Black Hood will beat them to it, and getting their butts kicked/kicking other people’s butts. It’s not enough.

Do better, Riverdale. If Archie can, so can you.