On my Block is a coming of age dramedy about four bright and street-savvy friends navigating their way through the triumph, pain and the newness of high-school set in the rough inner city. After spending a day on the set visit for season 2, chatting with the cast and crew of the show, it appears this sophomore season is going to be even better than the first!

Here are some highlights from production:

Characters are based on the Co-creators

After sitting down with the co-creators, Lauren Iungerich, Eddie Gonzalez, and Jeremy Haft it was clear from their mannerisms and later confirmed by everyone that the three of the main characters from On My Block are based from them. Lauren is Monse, Eddie is Ruby, and Jeremy is Jamal.

Eddie is from a large family, he was born and raised in the inner city, in high school he was 5’2 and his biggest concern was getting a girl, just like Ruby! The inspiration behind the Abuelita character is Eddie’s grandmother. Jeremy said, “growing up he loved adventures, gadgets, the Yeti, Big Foot, conspiracy theories, etc.” Just like Jamal!

The collaborators came together to create On My Block in a sort of kismet way. Lauren was having lunch with Jeremy (whom she met during the writer’s strike in 2007) and she was sharing how she was in need of help with creating a show that was a mix between Awkward and Freaks and Geeks — but set in the inner city. Jeremy’s response was “what about me and Eddie?” The following morning the trio met up at Panera Bread and over coffee, On My Block was born. 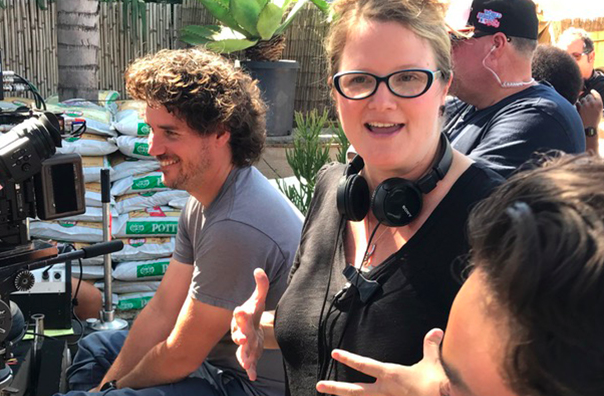 Lauren birthed On My Block from a place of healing

Lauren Iungerich found great success in the MTV show Awkward and her departure from the show was painful. According to Lauren about two years later, her producer reached out to her and asked her if she had seen the tribute videos for the series finale (Lauren’s series finale) and she was in awe of the tribute. She was ready to take a break from the TV and film business, but she saw the outpouring love from fans and she noticed that most of the people in the tribute videos were not white. And she said, “I needed to create a show for kids who were not white, they needed to see themselves”. Lauren was fully aware that she needed help and wanted to collaborate to make the show as authentic as possible.

According to her, “On My Block is not my world, I wanted to make the show and I wanted to do it right. My job is to hire young new filmmakers. I went to Netflix and said I want to hire people from this world, people who want to be writers and story creators — but have no inroads. I wanted to do the real inclusive work. On My Block has been the most transformative experiences of my life. I was in such a dark place after Awkward and this show has brought healing and positivity.”

Inclusion and Diversity Behind the Scenes

A buzz topic the last few years is diversity and inclusion, almost to the point where the most people’s spin on simply inviting different people to the table seems more like a trending topic as opposed to a necessity. Seeing diverse faces on screen is happening now, but diversity and inclusion behind the scenes are still lacking.

However, behind the scenes this show looks like the real world, it’s very inclusive. According to Lauren Lungerich, “Pauline (a Black woman) is our camera A operator and there are only three in the business of scripted TV”.

The co-creators and cast all spoke very highly of season 2’s new DP (Director of Photography and/or cinematographer). Bret Gray (Jamal) and Diego Tinoco (Cesar) gushed over the new DP’s artistic ability to beautifully light everyone on set.

The entire cast and crew are proud of how inclusive the show is on and off the screen, and Lauren Iungerich’s message to her cast and crew has always been “Everyone is invited. This show is not just me, it’s we.”

Process for Creating a Script

I spoke to Eddie Gonzalez about what the process was like for writing out the season and this is what he shared:

Eddie concluded with, “It is the greatest job on Earth.”

Technical Process from Script to Direction

The day of the set visit, co-creator Jeremy Haft was directing episode 5 from season 2 and he shared with us his process of going from script to direction.