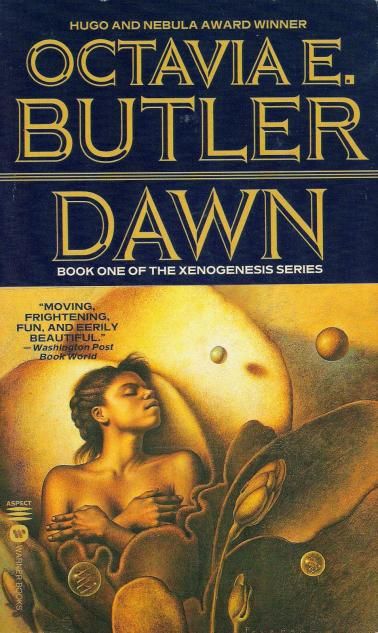 Before the television show hits airwaves, let’s take a look at the original 1987 book. At 247 pages, Dawn is a pretty brisk read. The protagonist, Lilith Iyapo, is a fully realized heroine with a hard set of circumstances to contend with.

The story starts after a nuclear war has burned Earth and much of humanity to cinders. An alien race called the Oankali are drawn to our dead world with a biological imperative to heal the planet and merge their genetics with ours. We have no say in the matter. Therein lies the conflict.

Lilith is groomed to be an emissary, helping other humans get used to the new world order. The task haunts her, as she resents the non-consensual tampering of the Oankali. On top of that, this merging of species comes with some steep prices, the details of which are parceled out to Lilith in intervals, causing the divide between her and her captive caregivers to deepen as well as the divide between her and the other humans.

Oankali society and physiology are fascinating! I discovered the book in the mid-90s, and since then, I’ve noticed bits and pieces of this seminal work peppered into other sci-fi properties. Still, the construction of Oankali culture, the biotech fueled world building, and the intricate characterization are peerless.

I have never encountered a protagonist whom I disagree with more vehemently while still feeling a strong sense of love and kinship. There is a quality to Butler’s protagonists, a certain grit and matter-of-factness to them that is appealing. Lilith is a part of that tradition. She’s savvy, stubborn, and practical. There is a fairly large supporting cast of characters, some more memorable than others.

Early on, one of the alien characters ‘diagnoses’ humanity’s failings, framing societal disease in terms of an actual affliction, and the plausibility of it still sits with me today. I  appreciate what Butler’s work has to say about the nature of humanity. There is no stretching credulity to make humans seem impossibly heroic nor without redemption. The situation is fantastical but the ways that people react to the circumstances are grounded in human psychology. There are no unblemished maidens, no magic bullets, and no easy morality. It’s as messy as life is, and that’s what makes it a classic.

Discovering Octavia E. Butler changed my life. Over time I had made the realization that I was a geek, just taking an inventory of the types of things I was usually interested in. The ‘blerd’ community sat a long way off, but I acknowledged that my favorite author in grade school, Edgar Allen Poe, had some similarities to my favorite author in high school and beyond, Stephen King.

Octavia’s work appeared in college sitting innocuously on a shelf, one of the few books in the Sci-Fi/Fantasy section with a Black face on the cover. My first book of hers was Mind of Mind, the start of the Patternist Series. But, Dawn and the books that follow in the Xenogeneses Series are my absolute favorites. Here’s this intensely cerebral, imaginative Black woman writing things that blew my mind, talking about humanity and society in this new way that resonated with me deeply.

In 2000, Dawn and the other two books, Adulthood Rites, and Imago that make up the Xenogeneses Series were gathered in one volume called Lilith’s Brood. Do yourself a favor and pick up this foundational science fiction.

Television is the perfect vehicle to tell this sprawling yet personal story. This is a project BGN will be keeping an eye out for; we can’t wait to see what Ava DuVernay does with this property.