Whenever there’s a film about comedians and their personalities on and offstage, I think of really good films, like Punchline, The King of Comedy, Man on the Moon, and, Funny People.

All About Nina could be on this list if it wasn’t all over the place. Like the above-mentioned movies, and, there’s probably other film examples that I’ve not watched, the plots tell a story within a story about the perils of a comedian, someone trying to become a big-time comedian, and, those who make it, but the demons still hang around. All About Nina has the demons and darkness — but needs more development. 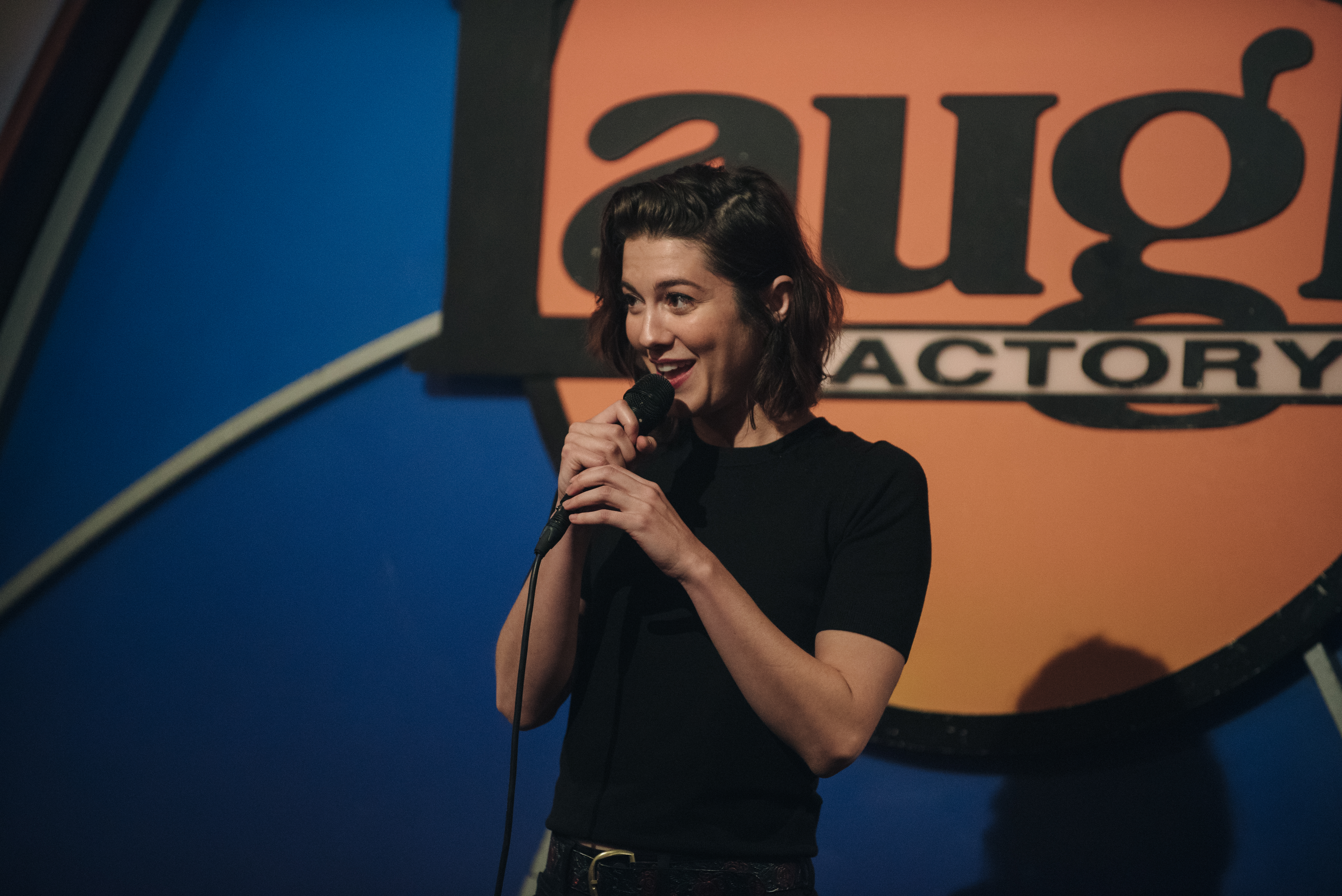 All About Nina is about Nina Geld, played by Mary Elizabeth Winstead (10 Cloverfield Lane, Smashed, Gemini Man ), who is a struggling, raunchy, woman comedian who uses her offstage life experiences in her stand up performances, who also auditions for a prime, one-hour concert special called, Comedy Prime. The film opens in the fashion of shadowing Nina as she enters the club, downs a pre-performance drink, vomits, walks the dark hallway until she’s backstage waiting for her introduction. She’s dressed in all black, bedhead hair, and, an attitude. I could not help but think of Nina as the youngest sibling to Andrew Dice Clay, Kathy Griffin, and Sandra Bernhard. Winstead does a great job playing Nina in all of her glory as a wannabe confident woman.

Nina’s routines are definitely off-color, as she relies on jokes about her vagina, periods, and, sex, but they are not funny. When she blatantly, and, nonchalantly, tells a bar patron to come home with her, things go south when she finds Joe, her married, police officer/lover, waiting for her in her apartment. When the possible one night, or, from the way Nina acts, one hour stand, leaves, Nina and Joe argue, Joe hits her, and, they have sex. The morning after, he dresses, leaves, and, Nina opens the window blinds, and, works on a routine about rape, and, getting beat up by her cop lover while topless, which brought to mind what comedian Griffin tweeted not long ago…a short video of herself standing at a window, topless, and, celebrating the Paul Manafort and Michael Cohen verdicts. Totally different scenarios, I know, but, it could not be helped.

Nina getting abused by her married lover, could be the storyline, with her trying to make the right decisions and, eventually, move on to being a big name comic and the cop getting kicked to the curb. Even during the constant moments when Nina constantly vomits after a performance, I thought was it post-stage nerves, or, was she pregnant with the cop’s baby? The latter would’ve really been a key point, given a brief scene involving the cop’s wife. 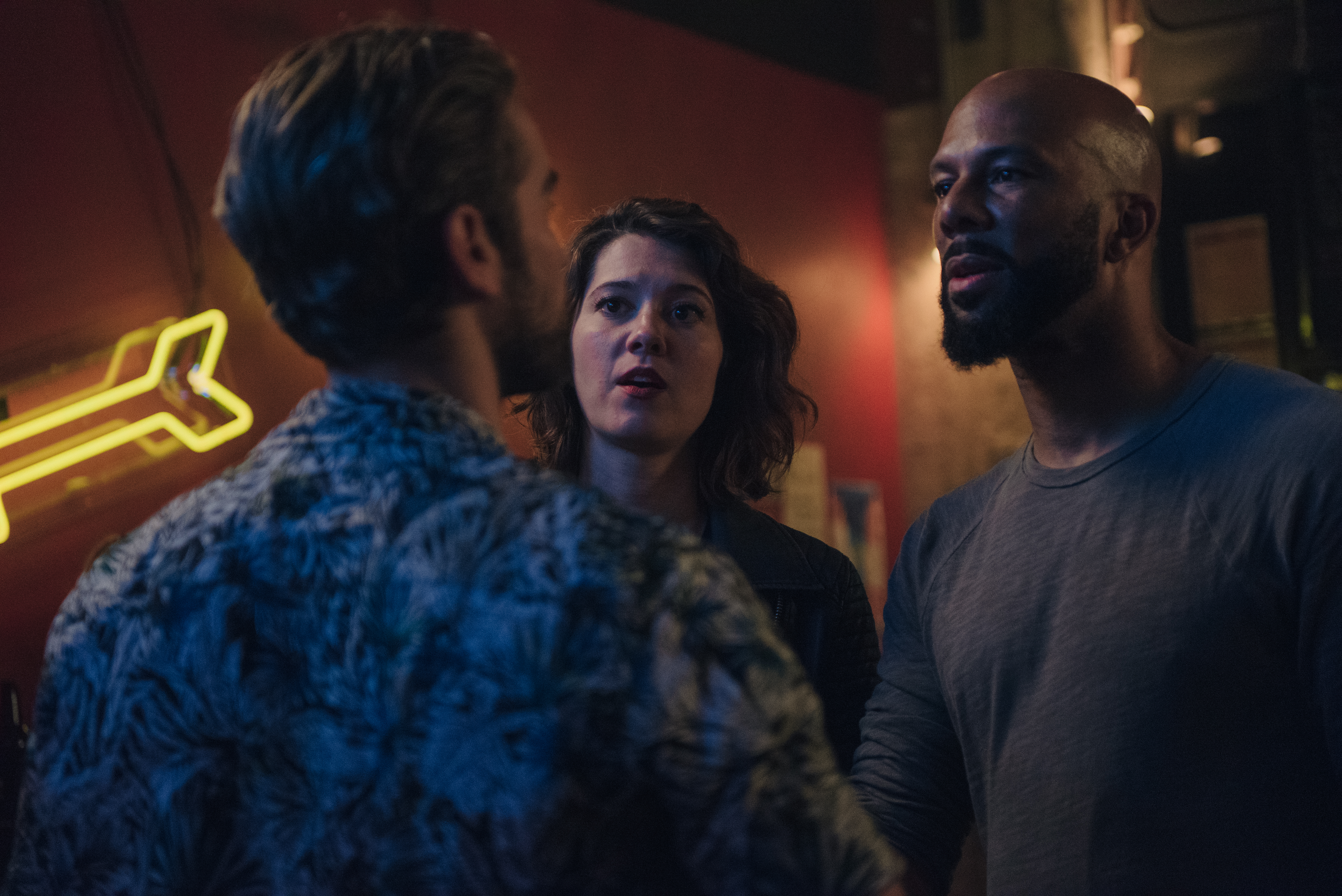 But, the movie goes on in the direction of Nina taking a chance to go to Los Angeles and audition for the chance to win a one-hour special on Comedy Prime. While there, she stays with her agent’s friend, who is in her own world. Then there’s, Nina’s encounter with a handsome, quirky, man named Rafe Hines, played by Grammy, Emmy, Golden Globe, and Oscar award-winning rapper, songwriter, and, actor, Common (The Hate U Give, Selma). Nina reluctantly gets to know Rafe, who is interested in her, but has his own hang ups. Nina has doubts, panic attacks, anger issues, and, the cop shows up in L.A. This movie could’ve turned into a romantic dramedy, but, the foundation remains about Nina and, it isn’t until the late into the film, that we see why Nina is how she is.

There are a couple of guest spots, including acclaimed actor, Beau Bridges (The Fabulous Baker Boys, Masters of Sex), as Larry Michaels, executive producer of Comedy Prime, and, Emmy award-winning actress, Camryn Manheim (The Practice, Criminal Minds), but, All About Nina is not the bold, attention-grabbing movie that it could’ve been. In the hit film, Punchline, Tom Hanks is a struggling comedian and med student, torn between two careers, with Sally Field playing a housewife dreaming of being a stand-up comedian to the chagrin of her doubting family. A friendship grows between Hanks’ and Field’s characters, until both end up competing for a major prize.

This is the first, full-length feature film by Eva Vives, who wrote the screenplay, and, directed it. Her short film, Five Feet High and Rising, won Best Short at the Sundance and Cannes film festivals in 2000. She describes, All About Nina as a semi-biographical movie about her life, and she wrote it three years before the #MeToo movement. She also mentioned in interviews, that she is not a comedian, but chose to make Nina a comedian for the film. All About Nina could’ve been a standout film on its own with a broader, steadier, storyline. Instead, it is all over the place.

All About Nina opens in theaters Sept. 28.