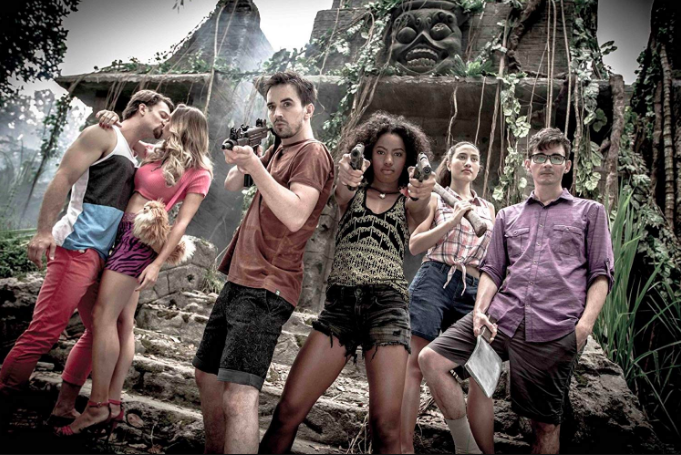 Zombies have quickly come out to replace the cherished vampire monsters in many movies and shows. Dead Squad: Temple of the Undead creates a kitsch experience for the viewers. The film with its unique storyline and the diverse assembled cast of women — creates an atmosphere of levity which feels counterintuitive. The film’s throwback to the low budget 80’s style horror genre collapses on itself. It attempts to emulate satire in a clumsy way. The choice to incorporate humor, left me thinking it should have gone and stuck to one of those two directions.

Although the zombie comedy-horror genre has been done before — Dead Squad: Temple of the Undead does not quite live up to the expectations such films like Warm Bodies, Shaun of the Dead, and Zombieland had established in recent years. Filmmaker Dominik Hauser creates the horror flick along with co-writers by Dominik Hauser and Nancy Thornhill. The evil zombie ensemble consisted of Erika Ervin — who plays the terrifying Zombie Queen and Conan Steven as the Z13. This is probably fitting because of his origins in the film, and the final clip of him at the end of the film.

The film has two groups of friends together on a small island. The male protagonist consists of three friends who are looking to enjoy their vacation. Of these three, one is Daniel (Jonathan Looper) who attempts to embody a meek nerd-type. Daniel’s acting leaves little to the imagination given to the character he is trying to depict. His role in the film is overshadowed by the two other male leads. Ethan (Guy Talon) is more of the alpha dog and a hottie with a body. He plays a dense and cowardly jock and is Tiffany’s love interest. His killer frame is almost enough to compensate for his ability to throw everyone under the bus for his own safety. John (Ryan Soboiski) plays an adventurous and brave character. He puts his own life at risk to save his friends, a real empathetic character. This trio of assorted males have the looks, but not very much chemistry on the big screen. 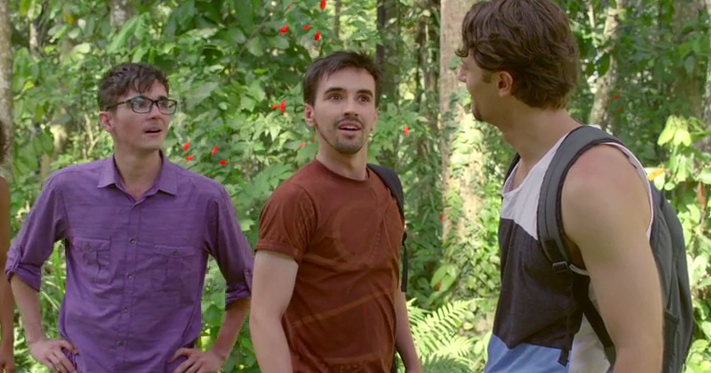 With each one of the male leads comes a female counterpart. Tiffany (Bianca Zouppas) portrays an inarticulate, promiscuous seeming woman, who is in a number of gratuitous topless scenes. Jennifer (Elizabeth Morse) stands as Daniel’s double, on the contrary, a smart and moderately independent character. With her addition, she still seems to take on a stronger role than her male counterpart. Lastly, Aneesha (Alina Carson) who is a star among the cast, plays the strong independent Black woman — which is a huge plus for horror films. Aneesha compares to a Black version of Lara Croft. She is a kick-ass character that shows her skills, and who refuses to be a victim for any of the zombies. These three characters present a well-rounded group with their own set of skills and talents.

The truly upsetting aspect of Dead Squad: Temple of the Undead is that it has the potential to be a hit, but it refuses to keep with a consistent theme of being a horror or comedy. The film tries to merge comedy and horror together but does so unsuccessfully. The jokes fall flat, and the horror scenes disrupt with breaks of continuity in the performances. At any given point, a sense of horror can arise, but a joke or an awkward sexual zombie conflict is inserted at the most inopportune moment to upset the fearful suspense of the film.

This is an unusual movie, like none other that has come before it. It plays on the overused tropes that exaggerate the characters. The pitfalls of the motion picture lie with overdone graphics, ridiculous muscle costumes, and poor performances. A plot that attempts to humanize zombies, but fails to do so in an effective manner. The overt sexuality of both the humans and the zombies might have viewers feeling this is more of an adult film rather than a horror flick.

The film does have a few positive notes that it ends on. Aneesha’s storyline is fully fleshed out and well-developed. The plot dives into her family history and the choices she made to get to where she is.  It is hard to tell with the short clip at the end revealing what happens after. This weird caricature of zombies could have made an interesting movie. If only they cut out everything that is wrong with it in the editing room, and left it as a thirty-second commercial.

If you’re in the mood for cheesy zombie horror on Halloween, this may be exactly what you’re looking for.