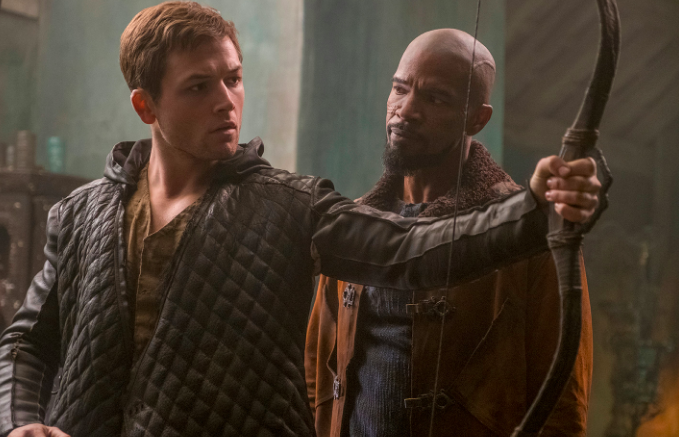 In the new film Robin Hood directed by Otto Bathurst, the reimagined adventure showcases Robin of Loxley shooting arrows, stealing money, and head-over-heels in love. Overall, the film stays true to the legend of the hooded outlaw with only a few subtle differences. As a fan of the story’s lore and character, the movie was fun, but I wasn’t impressed.

The revamped story sees Robin of Loxley (Taron Egerton) drafted into the crusades on behalf of Nottingham. During a mission he is injured and sent home. Upon his return, Robin finds out he has been assumed dead for the past two years and the love of his life Marian (Eve Hewson)  moved on and got married. The Sheriff of Nottingham (Ben Mendelsohn) is to blame. The Sheriff is also corrupt and taxing the citizens in a fit of greed in the name of the Church. Robin teams up with Yahya, translated to John (Jamie Foxx) in a revolt against the Church to balance the scales between the rich and the poor.

Let’s start with the positives.

The cinematic production of this film is fantastic. From sound design to cinematography, the look and feel of the film captured my attention and got me excited for this action/adventure It was all very stylish and dramatic. Unlike, the stylish reimagining of 2017’s King Arthur, Robin Hood balances the line between style and story. When it comes to what I see on screen, the stylistic changes are for the better exhibition of the story. When it comes to what I am hearing, the sound of arrows whizzing to and fro gives audience a real dive into the fantasy world. The use of specific tones and color pallets provide a real Robin Hood feel to it all too. It matched the setting perfectly. 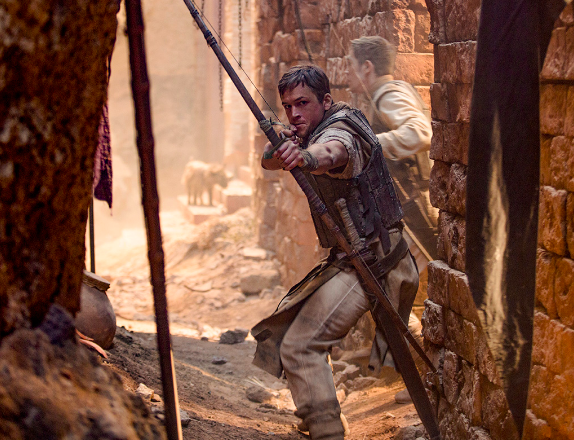 Stunts in a film are always a good time. The more realistic they look, the better. Egerton is no stranger to performing his own stunts, as is evident in the Kingsman movies. The stunts performed in Robin Hood were fun and exciting to watch. The archery, the sword fighting, the leaping off of buildings…it all reminded me of the film Assassin’s Creed starring Michael Fassbender.  The film was adapted from a game which I love playing. Egerton as Robin Hood is a great match. He is super charming as ‘Eggsy’ in Kingsman, but extremely charismatic as Robin of Loxley. Egerton makes the movie.

One of the best scenes in the film is the Cardinal Party scene. It gives off a real bohemian, Moulin Rouge vibe coupled with Hunger Games vibes. The colors were vibrant, which really stood out among the forest tones of the film. The wardrobe is fantastic. It’s a fantastic twist to the upper class vs lower class societies.. I can see many of these clothes on the shelves of stores  in 2018 and it’s fabulous. Long gone are the green tights and frock. Robin Hood’s garments were both fashionable and in some ways still representative of the time period. There is a joke, albeit not a funny one, about a coat versus a jacket. 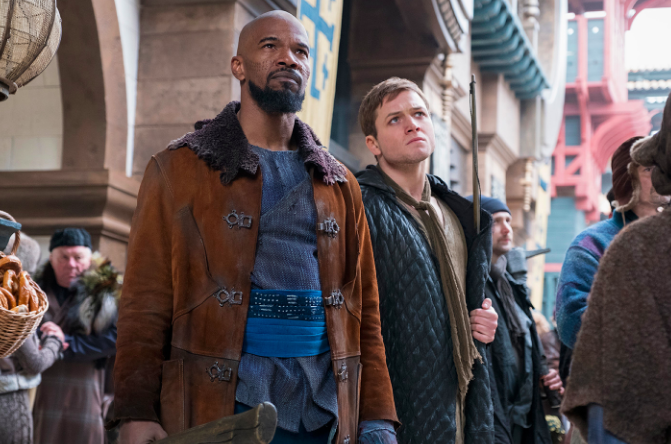 Jamie Foxx as Yahya — a name translated from Arabic to John — did not give a great performance. His accent was all over the place and it wasn’t a very good accent to begin with. His performance was over the top and seemed as if he was trying too hard. It was disappointing to see a brand new version of John portrayed in such an unremarkable way.. Along with Foxx, Tim Minchin’s portrayal of Friar Tuck left something to be desired as well. In total transparency, Friar Tuck was the weakest link in this film and he depicts one of the most recognized characters apart from Robin Hood. As  comic relief, his jokes and whimsical demeanor fell flat on screen. It almost seemed as if he were smiling or laughing in each scene, even during the more serious parts. His depiction of Friar Tuck was not enjoyable at all.

Robin Hood is written by Ben Chandler and David James Kelly. The script is lacking in substance and is not compatible with the scope of the production. The production value is high, while the writing  lacks the sophisticated edge of such a notable story. The pacing is what makes moments throughout the story. In order for the audience to feel something, there needs to be some kind of build up to the climax or moment of emotion. A sense of rising action or rising tension. The language is very monotonous,  and as a result, the pacing and delivery of lines didn’t have the effect intended at all. 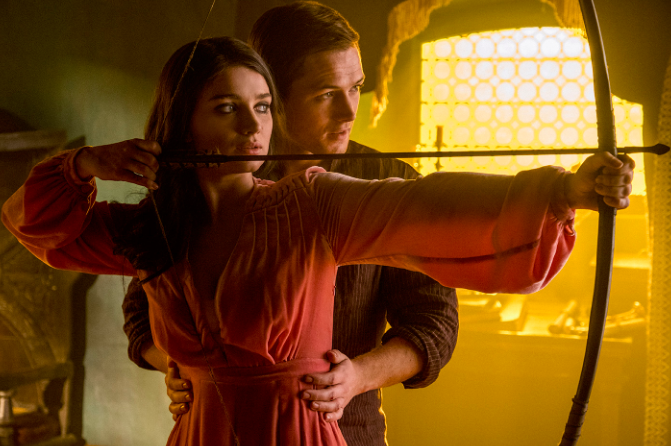 Overall, adventure and action fuel this new vision of Robin Hood. It’s not mind blowing, but it is fun. What else could you want from the hooded crusader? Catch Robin Hood in theaters November 21st.