Meet Madonna Thunder Hawk: the lifelong Indigenous human rights activist most recently in the news for her work organizing the NODAPL protests in South Dakota. When I say Madonna has seen it all, it’s no hyperbole. She grew up in a pastoral Lakota setting as a member of the Cheyenne River Sioux Tribe back when the water was clean and the children foraged for wild berries and sweet onions on the Missouri River’s banks. Until the government flooded out their land, forcibly relocated the tribe, and changed their lives for the worse, a phenomenon that has only intensified in the decades since.

In their directorial debut, and jumping back and forth between historic events, Native filmmakers Christina King and Elizabeth Castle’s Warrior Women explores Madonna Thunder Hawk’s life as it relates to Indigenous women and the struggle for Native self-determination in America. And, Thunder Hawk’s life experiences are quite a map of Indigenous resistance in the USA spanning the past five decades. 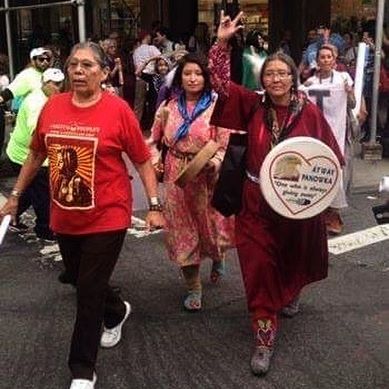 Based on filmmaker Castle’s book Women Were the Backbone, Men Were the Jawbone: Native Women’s Activism in the Red Power Movement, the documentary centers and highlights the women of Indigenous activism who are often marginalized by a media that tends to value men’s voices and contributions, overlooking women altogether. Thunder Hawk was there for the Wounded Knee occupation in Pine Ridge Reservation, 1973. She was there when Natives took over Alcatraz and occupied that excess federal land for almost three years. She was a key figure in Indigenous sovereignty efforts abroad at the United Nations in Geneva. She survived the grotesque experience of the so-called Indian Boarding Schools that were only an excuse for the state-sanctioned torture of young Native children. She founded the “Survival School” where young Natives could begin reclaiming their spirituality, traditions, and history that white America has tried to erase. She is still a core member, and now elder, of the American Indian Movement.

One of my favorite aspects of Warrior Women is how it tells Thunder Hawk’s story and the bigger picture of Indigenous resistance through a conversational and non-linear presentation of American history via Madonna’s eyes. The events emerge organically through her stories, her sense of humor, and her sadness, in some ways culminating in the initial win to stop the Dakota Access Pipeline that would further destroy sacred Native lands and natural resources.

Along on Thunder Hawk’s journey for Lakota, Dakota, Nakota self-determination and human rights, is her daughter Marcella Gilbert. Since she was 16, Gilbert has also been a part of the Native resistance and the movement for recognition of the ongoing genocide of Indigenous peoples in America. Not only does she physically resemble her mother, but Gilbert is proof that fierceness—warrior woman-ness—is passed through generations. As well as a gift for comedy. I will never stop being amazed at how Native women, in particular, can find something to smile about and laugh about, even amid the ongoing environmental and other racism that keeps their communities in a steady state of poverty and oppression.

But Warrior Women isn’t only an important historical account of how one woman activist’s life traces the entire Indigenous sovereignty movement. It is also a story about mothers and daughters, and the sacrifices warriors have to make when it’s time for battle. And these women are the very definition of warriors. I especially appreciate how Warrior Women unsettles the stereotypical notion of what an Indigenous warrior looks like. It’s not just a Native man on a horse with leather breeches and a headdress. 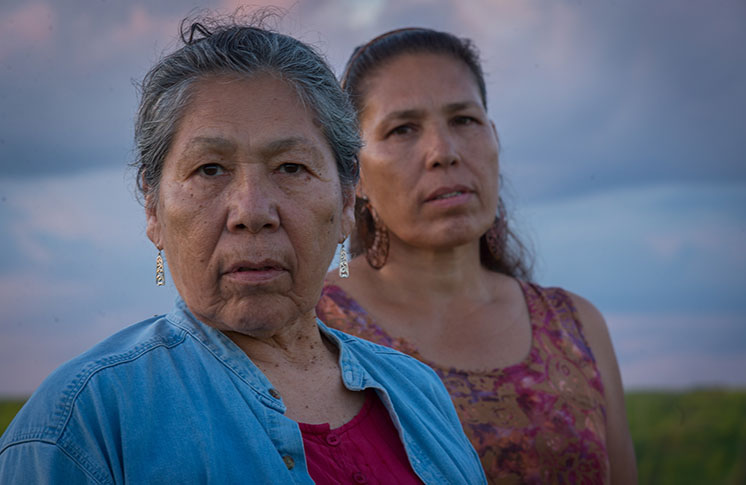 It’s also a Native woman, an elder with long grey hair, jeans, and a pin advocating for Indians’ human rights on her jacket lapel. Her weapon isn’t a spear, it’s a microphone amplifying her voice. Her battleground ranges from protecting her ancestral land to the cobblestones of Geneva at the United Nations. There are many ways to think about who and what makes a warrior. Thunder Hawk challenges those pre-conceived notions.

One of the more wrenching aspects of Thunder Hawk’s life as an activist warrior was the effect it had on her daughter. Because Thunder Hawk came from the generations that experienced some of the peak cruelty of state-sanctioned racist violence—her mother was fully raised in an Indian Boarding School and the trauma shattered her—fighting for her people was more natural to her than mothering. Thunder Hawk didn’t know how to balance her activist self with that of being a mother, and it wasn’t until her daughter Marcella began breaking some of these toxic cycles of intergenerational trauma that Madonna herself began steps toward healing. It was beautiful to see Madonna recognize her own shortcomings with her daughter and acknowledge how it was Marcella who broke their family from those poisonous behaviors. Now, this healing, in turn, makes her not just a warrior woman, but a warrior healer in all different senses of the term as well: a warrior who heals others, a warrior who is healing herself.

For those unfamiliar with the trajectory of Indigenous rights and resistance in America, Warrior Women is a great foundation for further study. It highlights the major events that shaped the movement to where we found it in the NODAPL Protests and hints at other events in between that intersect with the variety of civil rights movements developing in America since the 1960s. History is a spiral, and watching the legacies of a hundred years build through just an hour on screen is remarkable indeed. Warrior Women should be required viewing in history classes, and especially at high-school and college ages.

The fact that this is a movie about Indigenous women actually made by Indigenous women is icing on the cake. It’s been too long that women’s stories, and in particular women of color’s stories, have been co-opted and fetishized by others. Warrior Women is a leap toward rectifying the huge gap.

Indigenous Sci-Fi and Fantasy Authors You Should Be Checking For