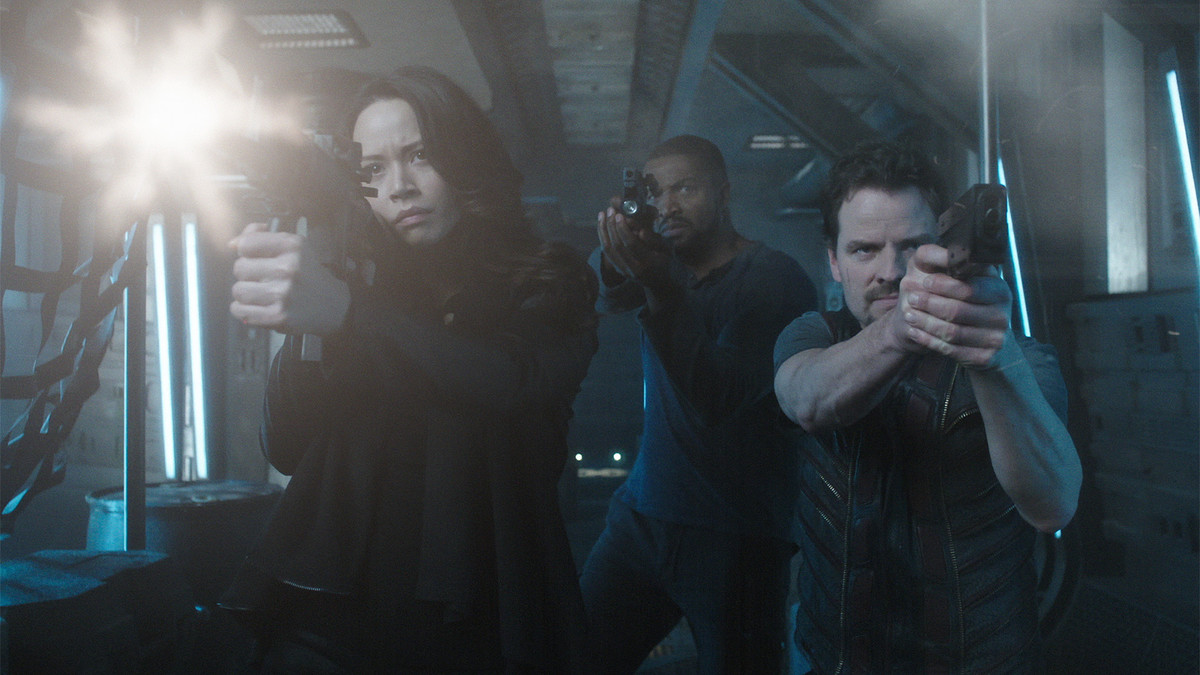 Let me start by saying I’ve seen every episode of this season of Dark Matter up to but not including the finale. Viewers are in for a run of entertaining outings. I’ve enjoyed most of this season, but tonight’s episode was particularly special.

The first accolade I can bestow is Best Title. Most of the titles worked pretty well this season so way to go, Dark Matter fandom; you voted wisely. But, “Hot Chocolate”  is in a class all its own. Seemingly innocuous, it eludes to a conversation between Android and Five way back in the first season, a pleasant character quirk of Android’s that gets mentioned from time to time as a cute running gag. Unlike her command for Android to “Kill them all,” in 2.2, Five doesn’t deepen her voice when she says it nor does she infuse it with any special sense of gravitas. She uses the same friendly, low-stakes tone she’d use if she were actually conversing with Android about hot chocolate. After a brief reboot, Android dispense with the guard clone and it’s a total “oh shit!” moment. 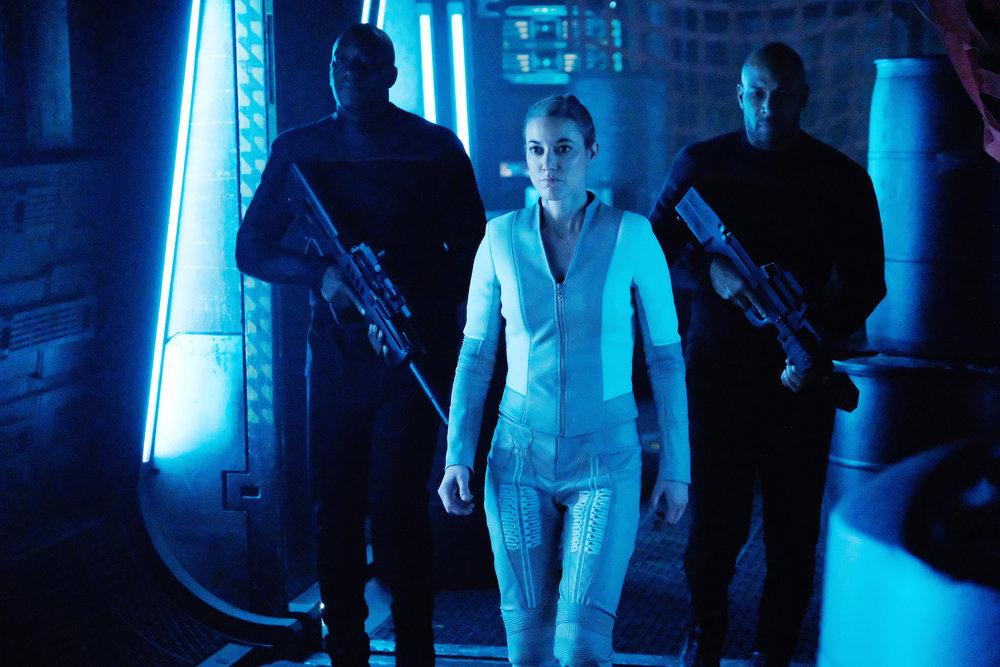 The next award goes to Best Fight Scene of the Season. I’m not even going to qualify that statement with a “thus far” because the likelihood that any fight scene will top this one is remote. Two and Ryo finally having it out physically and with words was as thrilling as it was necessary. The choreography, power, level changing, shifts in momentum, and editing had my eyes dancing. The emotional weight had me aching.

Toward the end, during a brief pause to trade winded recriminations, Two gets disgusted by Ryo’s callous disregard for the ‘corporate puppets and mouthpieces’ that he slaughtered on Eos-7. (In reality, every death since the corporate war started falls on Ryo’s hands since he started it for his own agenda.) The battle strikes up anew only to have them land in a standoff, guns pressed against one another’s jaws. Finally, finally, Two gets to ask Ryo about Nyx. She’s a totem of rage and grief but she also projects a genuine need to understand. It reminds me of how she was so adamant about comprehending Six at the beginning of last season.

Alex and Melissa kill this scene, bringing both intensity and pain to this exchange. I watched the fight several times and that end conversation several more. As much as I enjoyed gruff, almost curmudgeonly Four, Ryo gives Alex Mallari Jr. the opportunity to play at every corner of his range. Seeing him politicking with the colony leaders, emoting with Two, and matching wits with Six really makes me appreciate this storyline all the more.
ALSO READ
Priah Ferguson on What 'Stranger Things 4 Vol 2' Has to Offer Fans

Periodically, Four did things that were horrifically off-putting and to compound that, his general demeanor was so closed off and forbidding it was sometimes impossible for me to parse the distance to empathy. I don’t approve of Ryo’s actions, but I see his struggles more clearly.

Another interesting morsel was Android commenting on how Five and Sarah’s solution to trap the intruder in his own body seemed almost cruel. I wonder if Android will continue to try to make Five examine her more ruthless impulses. In Five’s mind, and in mine he had no business violating Android so his fate is fitting, but I can also see how a being with less emotional baggage than a human would find that ethically questionable.

The beginning of this episode was a great misdirect. Set up a story about colony intrigue only to table it in favor of a showdown with Ryo. Since they went out of their way to communicate that Android didn’t kill the colony leader, I’m guessing that little detail will fit into the story later.

As spectacular as this episode is, I have one gripe. Ryo says “Blink drive or not, you know this won’t end until one of us is dead.” Why?! No seriously, what would be the point of pursuing the Raza if it weren’t for the blink drive? Aren’t you busy losing a war? This whole business with the Raza has been a distraction that has depleted your resources. If Five came in the cargo bay at that moment and vaporized the drive right in front of you, what would be the sense of continued pursuit?

In the end, Ryo doesn’t get what he came for, but he does get 12 new allies in the form of independent colonies joining the League of Autonomous Worlds. He uses that advantage to redouble his war efforts immediately while the humans of the Raza enjoy some yummy looking potato wedges made by Android. As Six sagely notes, there are worse places to be. 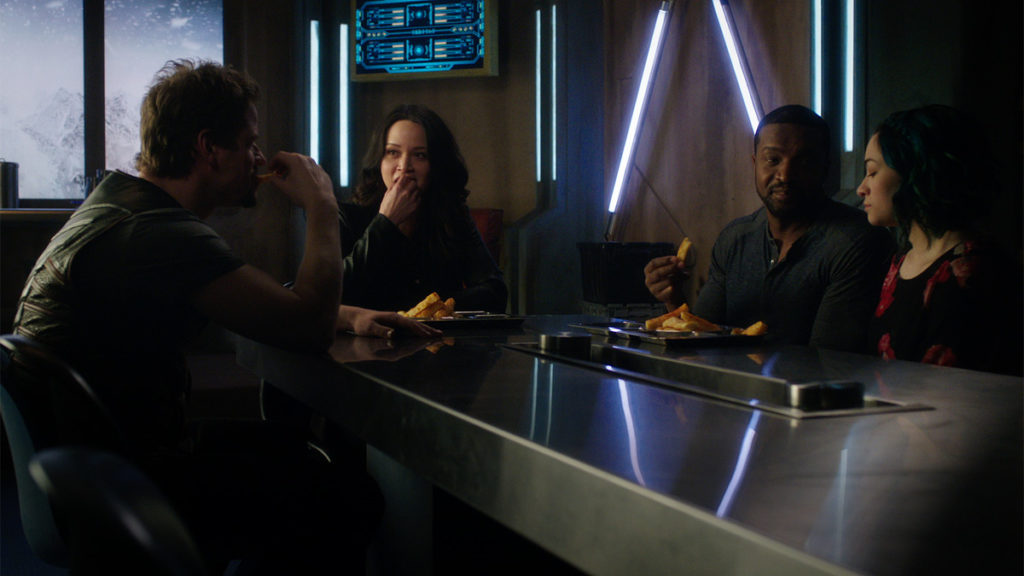