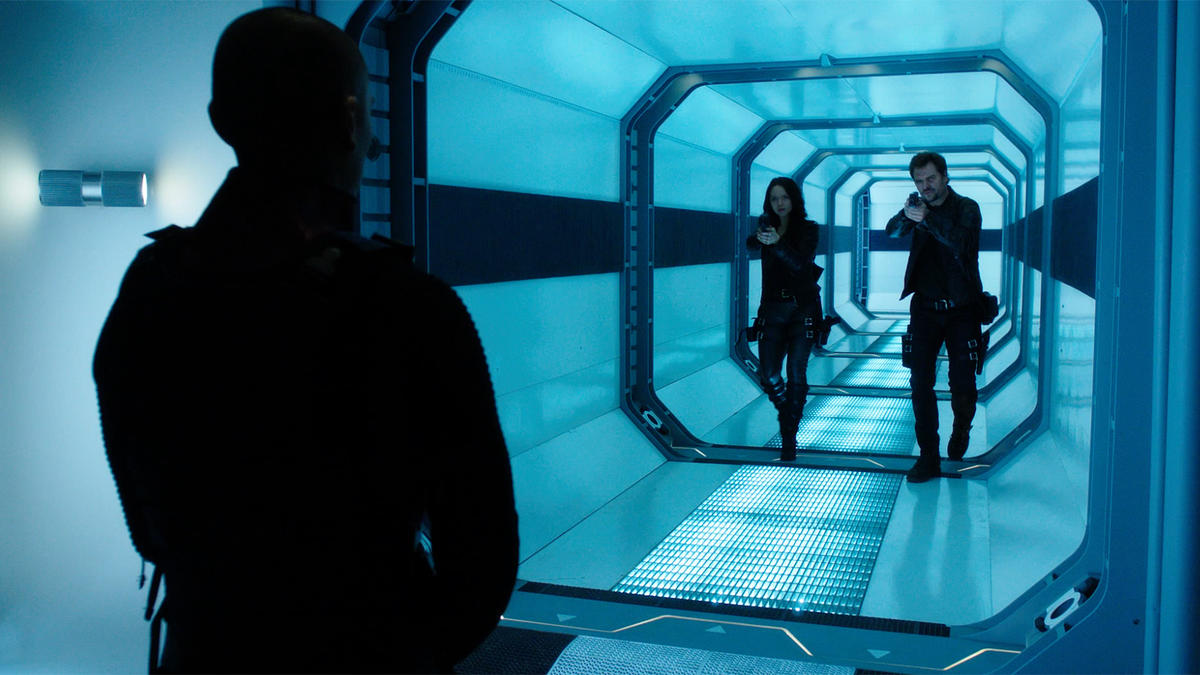 For the second time in the double premiere, one of Two’s lines is used as the episode title. I know Joseph Mallozzi ran a contest to have fans vote on the titles for season 2, and it looks like the tradition continues. In this episode, the crew strikes a blow against the duplicitous emperor formerly known as Four, Ishida Ryo.

Ryo’s story starts in 3.1 as he takes steps to solidify and strengthen his rule. Misaki is displeased when he makes his old teacher, Teku an advisor.  I’m sensing a pattern with Misaki. She may talk a good game about doing what’s best for Zairon, but it looks to me like her desire to isolate Ryo from anyone else who would influence him is a pretty strong motivator as well.

Ryo is in a very interesting place right now as he restructures his royal court for maximum effectiveness. Teku is completely loyal to him, while Misaki is completely loyal to the throne and Zairon. The rest of the royal court seems terrified of him, so they’re little more than functionaries he can’t completely rely on. He strikes a dangerous but necessary balance, employing the loyal but shrewd counsel of Teku and hardline ruthlessness of Misaki.

When he sends his clone to the research facility, he does so with the intent to negotiate with the Raza crew in a manner that passes for civility with him. Ryo smiles all the time, whereas Four almost never did. It’s a hard smile though, nothing pleasant about it. Two finds it difficult to even look at him, and when it’s time for his clone to go night-night, she’s not the one to pull the trigger, Three is. Interesting.

The pocket universe of null space eating the station was dope. I thoroughly enjoyed that plot point. This was a simple effect but it provided the timed danger our heroes needed to push the narrative relentlessly forward.

The inner politics of Zairon have potential to be very engaging, as you have absolute loyalists like Misaki and the female scientist on the research station. Then you have the practical and ethical folks represented by the male scientist. Teku is harder to figure out. He is loyal to the Ishida bloodline, but he’s also philosophical, a point demonstrated when Five is digging around in Ryo’s memories and Teku admonishes a young Ryo for his fascination with ships and weapons over knowledge and tradition. We’ll learn more about his ethics in the coming weeks.
ALSO READ
Lifetime Movie Director Nicole L. Thompson Dives Deep into the Realities of Directing a True Crime Story

I predict that the tension-filled dynamic between Ryo, Misaki, and Teku will be interesting to watch unfold. I hope there is even broader political intrigue, and we really get a sense of how the people of Zairon are responding to all these changes.

Personally, I am interested in seeing how Ryo and Misaki’s relationship will evolve. If it were me, I couldn’t have someone who disobeys direct orders and thinks they know better about my rule than me, but I can also see why Ryo finds her steady influence and connection to the throne appealing. More to the point, if he can’t deal with the Raza crew because of his lingering feelings towards them, then even as it pains him, he has someone in his pocket who can and will.

It’s good seeing a bit of Five‘s back story, but even more intrigueing is that the crew consents to her using the mind probe repeatedly, knowing how dangerous it is. They’re starting to see her as more than just a kid. However, Android’s barely-contained fury at her warnings being ignored is evident when she gives Five her prognosis in the infirmary.

Five having a sister doesn’t do anything for me just yet, especially when there’s still unanswered mysteries from last year like who came over from the parallel universe. I suspect I will get more invested as the story comes together more. When Android was first exploring her existence I wasn’t with it, but adding the rebel androids into the mix certainly changed my tune, so I’m ready and willing to be amazed by Five’s new story line.

Next week’s episode looks wild as hell. See you there!