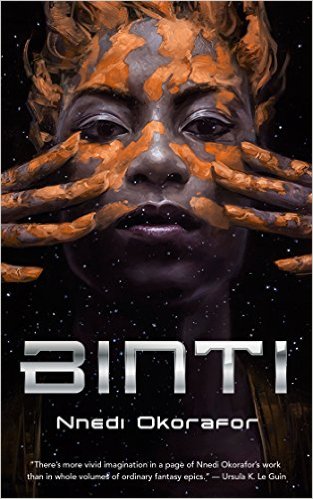 Within a decade, Nnedi Okorafor has established herself as one of the most powerful and recognized Black voices in current science-fiction and fantasy. Her range is pretty impressive, from YA stories like Akata Witch, to writing Black Panther issues, to sci-fi novels like The Book of Phoenix (shortlisted for a Clarke Award), and to say nothing of the remarkable Lagoon.

With Binti, she explores the shorter format of the novella, in a series of science-fiction stories following a young Himba woman.

Binti belongs to the Himbas people, a people from Namibia and Angola who are both gifted and secretive and who remain on Earth within their community in a time of galactic travels. Binti is expected to succeed her father in the family shop and to marry. But she is a remarkable mathematician, and she has been accepted to Oomza University, a prestigious galactic university. She chooses to leave her home and family to go to Oomza, and a journey begins that will change her, though she will also try to remain true to her origins.

In the three volumes, one of the main themes that has really struck a chord with me is the theme of growing up in a traditional society with a yearning to go beyond but without reneging on your origins. The conflicts Binti goes through all over the three volumes, whether they are internal conflicts or external conflicts, to attain this sense of still being part of her society while shattering all of what they stand for were amazingly well done.

Binti also conveys a message of peace and dialogue between groups ready to escalate into war and violence. It’s not only the idea of understanding each other but also of truly meeting each other, and the theme of hybridation that was so dear to Octavia Butler is everywhere in the main character.

The world is also remarkably served by Okorafor’s inventiveness and creativity. The objects and creatures throughout the three novellas aren’t just here to serve the plot. They also act as metaphors for the people who inhabit it, whether it is a house, a traditional unguent, a ship, or a mysterious device.

This adds a real sense of scope to the story. Though novellas often focus on tight actions and a few characters, Okorafor brings Binti into contact with many races and people. Binti is discovering her own place into a very wide world, populated by many different peoples.

Some aspects of the novellas may work less well with some readers in that some resolutions can feel a bit like fairy tales endings in an otherwise very realistic, sometimes grim, story. But it also gives a sense of optimism. It tells us that neither dialogue nor empathy should never be overlooked and that bridging the gap should be the key to overcoming prejudices and violence.

Binti is not to be missed by any Afrofuturism fan. It is a story that will ring true on so many aspects for some readers who will recognize themselves in Binti’s struggles. It is also a story with an amazing scope and a delightful inventiveness. The first volume of the series won many awards, but I believe it is in reading the whole series, now finally completed, that this story truly resonates.