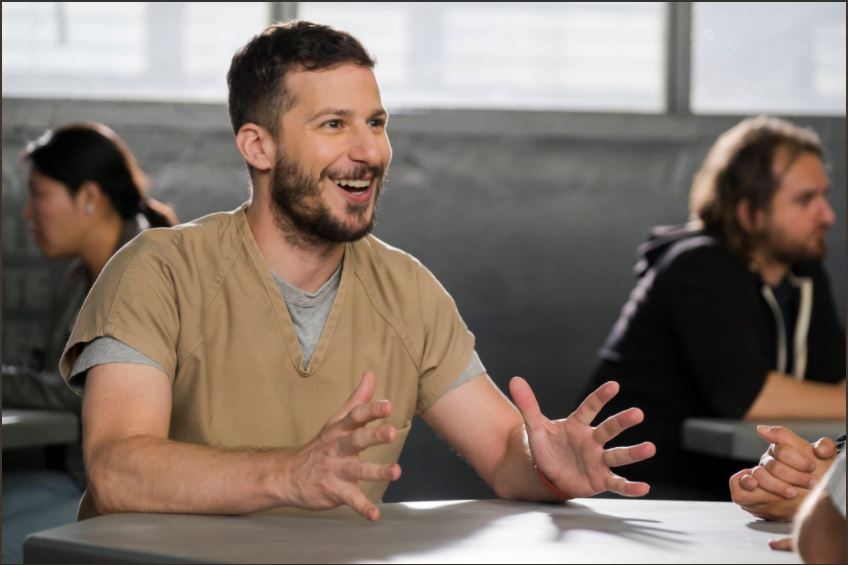 Brooklyn Nine-Nine is back! Jake and Rosa are still in prison ☹ but the crew is doing everything they can to prove their innocence and set them free.

We open with Charles (and his really bad hair dye), Amy and Sarg sad and stressed about their colleagues’ predicament (same) when Jake walks through the doors! It is quickly revealed to anyone who watches this show that this is really Charles’s dream sequence because Jake only wants to hug his best friend, and he wins an all-expense paid trip for him and a male colleague to Disney World.

Back in reality, we see that Jake and Rosa are in still prison, but Jake is excited because after three months he gets visitation and he finally gets to see Amy and Charles again. When they reunite the three talk about his case and how desperately he misses them. His visit is cut short due to a fight out in the yard, causing the prison to go on lockdown and forcing all the prisoners back inside, crushing Jake’s spirit, and mine.

Jake is still devastated by his visitation being cut short, so his roommate suggests he gets a phone. Jake’s roommate Caleb — who is a cannibal, yikes — introduces him to Romero, a gang leader who has access to the outside. Through a long complex system of trading (it was honestly delightful to watch) that ends with ramen, Jake gets the phone but he and Caleb are kicked out of protective custody for having outside soups.

Jake and Caleb are freaking out because general population isn’t going to respond well to a cop and a child eater. Jake decides the only way he’ll be safe is if he joins a gang, and decides to pitch himself to every gang in the prison. This doesn’t end well, obviously, but as a last-ditch effort, he decides to pitch himself to Romero (the guy that got him the phone) despite the warnings from about Romero’s notoriety throughout the prison.

Jake goes for it anyway, and Romero has taken a liking to him. In order to join the gang, Romero tells Jake he has to kill a guard, which is clearly a problem for Jake, so he tries to negotiate and strikes a deal with Romero that he’ll get the guard fired instead. Jake has Caleb secretly record as he gets beaten up by the guard so he can send it to Boyle and have the video go viral. Through a series of mishaps (most of it while Jake takes repeated vicious beatings) they manage to get the video, but just as Jake is about to send it, they get caught by the warden.

The warden questions Jake and asks him to join Romero’s crew and be his snitch. Jake refuses until he realizes that he can bargain for his phone back. Later, while talking to Amy, Jake gets a warning from Romero that he better not betray him, or he’ll face the consequences.

Meanwhile, Terry and Captain Holt go to see Rosa and are trying different ways to comfort her. She asks them to do a couple of outside favors and because of her predicament, they agree. Unfortunately for them, Rosa doesn’t hold back and she as them to do a myriad of things like type up and email her graphic and sexual letters to Pimento, cancel her cable, and make sure her bike “stays fresh” by riding it daily.

Holt and Terry go to visit Rosa again, reporting that they have taken care of all her tasks. So, she asks them to do a few more, these much more ridiculous than the last. Holt refuses, telling Rosa she’s asking too much from them, and she agrees. Rosa admits that she was taking advantage of them because she wanted them to treat her normally; she’s in an awful predicament and wants some sense of normalcy in her life during that time. Holt and Terry apologize and agree to treat her the way they usually would.

I’m so glad the show’s back! I appreciate the reoccurring look at the horror that is prison conditions, and that they don’t really focus on Rosa’s experience because she straight up tells us what is happening. Plus, we explored what women’s prisons are like in an earlier season with Amy. Also, as I am sure frequent watchers would agree, you don’t need to question how Rosa would fair in prison.

Jake’s roommate being a cannibal whose victims are children, is so out of left field and dark, that him being portrayed as a nice dad next door type (that prefers the term woodworker)(and played by the always hilarious Tim Meadows) makes it even funnier.

Captain Holt playing the gay card and thus calling out the heteronormative expectations to start and/or have a nuclear family just because he doesn’t want to ride Rosa’s motorcycle is actual brilliance. Yas Queen.

I’m assuming that the storyline of Jake and Rosa being in jail will end after Big House Pt.2 per usual season opener formula for this show, which I’m not sure how I feel about because I enjoy Caleb, regardless of how twisted his crimes are and because I’m concerned the storyline of their release may come across as rushed (it IS a 30 minute show), plus Andy Samberg’s prison beard is hot (don’t judge me).