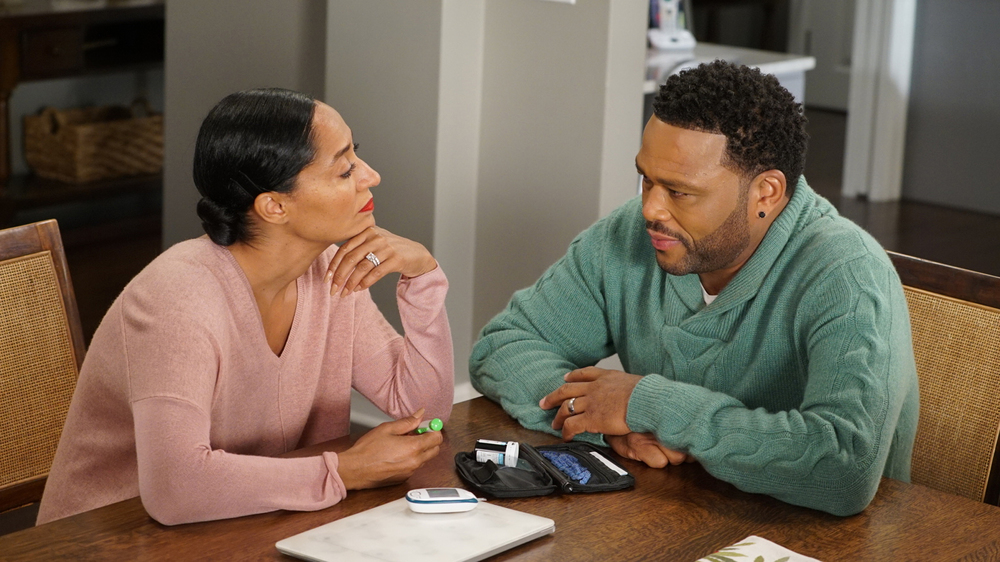 In the latest episode of black-ish, Dre is faced with a health scare and Jack has suspicions about his youngest sibling.

At his doctor’s appointment, Dre is shocked to learn he has Type 2 diabetes, the doc and Bow assure him that as long as he maintains a healthy diet, exercises and monitors his blood sugar he would be fine, and oh yeah take medication. Somehow I don’t think Dre is going to take to kindly to the last part. Instead of staying to learn more about managing his symptoms, Dre goes to work, leaving Bow to learn how to manage his condition.

While Dre literally walks away from his problems, Jack fears that baby DeVante is out to get him, that the sweet adorable, six month old hates his guts. Where this boy got that idea in his head, I have no idea, I worry about Jack. Diane is proud that DeVante seems to dislike Jack, and tells him to embrace it because haters give her life, me too Diane, me too.

After the guys at work freak him with injection horror stories, Dre experiences anxiety about pricking his finger to check his blood sugar levels and taking the insulin. Pops advises Dre to try self-healing by using natural remedies, rather than following his doctor’s instructions and surprisingly Dre actually listens to him. At the office Christmas party Dre tries to convince Stevens that by fasting he can cure his diabetes, therefore he hasn’t been eating, and I knew this was going to go badly.

Junior attempts to coach Jack in getting over his feelings about DeVante’s apparent dislike of him, by becoming indifferent to what people think of him. Now we all know sometimes to make something tougher you have to expose it to harsh conditions, and honestly, there is nothing and no one harsher than Diane. Out of all the insults she hurled at Jack the one that really stung, was when she told him that a girl named Vanessa said he couldn’t dance, and that was – sing it with me – “cooold blooded”.

As Jack learns that the best way to make a baby like you is to make them laugh, Bow arrives at the party looking fly in a red velvet dress. She finds Dre looking like he’s about to pass out, and after she measures his pulse, he does just that. Once he comes to, Bow stresses to Dre that he needs to take better care of himself because his family needs him. The next morning Dre wakes up to find the family preparing dinner, and just as Diane asks when their new dad is coming home, in walks sexy, fine as heck Rick Fox (hey boo). After seeing his children extol the virtues of their new dad and seeing Bow literally get swept off her feet, Dre wakes up screaming from his nightmare.

Realizing that if he wants to be a part of his family’s future and not be replaced by an extremely handsome man, Dre gathers up his courage and decides to let Bow help him. He finally admits that his diagnosis scared him, but he knows he needs to take control of it. As someone who has a chronic disease myself, I sympathized with Dre’s anxiousness.

Sometimes we let our fears get in the way, but one of the ways to overcome this is by taking control of what we can of, such as being diligent with taking medication and paying attention to how our bodies feel. Once we take those deep breaths and remind ourselves “I can do this, I can get through this”, it makes it all just a bit easier to live with, especially if there is a strong support system, such as a sibling or spouse.

Diabetes, or as we sometimes to refer to it, “the sugars”, while being one of the most prevalent diseases affecting the Black community, is also one the most overlooked. There are various warning signs of Type 2 diabetes such as excessive thirst and the constant need to urinate if you think you need to be checked by your doctor do so. Visit online resources such as Diabetes.org to learn more about prevention, and managing the disease once you’ve been diagnosed.