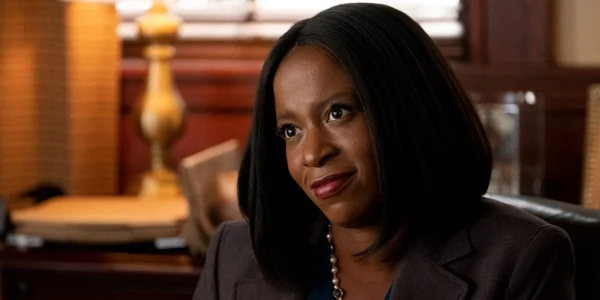 What does it mean for a Black woman to be the mayor of a town that refuses to recognize Native sovereignty? This is the question I was left with after watching the first season of Rutherford Falls, a new show from Sierra Teller Ornelas (Navajo), about the fight for the history and future of the titular Rutherford Falls, a small fictional town somewhere in the Northeast founded in the early colonial period and next to/on the land of the also fictional Minishonka Nation.

Over the show’s ten episodes we see the various powers that try to out-scheme each other with hilarious, and poignant, results. The cast is stellar — including Ed Helms as Nathan Rutherford, the town’s manic protector of white colonial history. Then there is Michael Greyeyes as Terry Thomas, the savvy council member and casino director of the Minishonka Nation, and, of course, the incomparable Jana Schmielding as Reagan Wells, bright but beleaguered upholder of Minishoka cultural history. Next to this lineup, we learn next to nothing about Mayor Deirdre Chisenhall, the Black woman in question — played by Dana L. Wilson — that really fleshes out her motivations in the story, which leads her to fall a little flat.

While network television is slowly realizing that Black women have nuance and depth, the TV mythos of the strong Black woman still wins the day. This archetypal woman is undoubtedly badass and usually in a position of power, but does not get the emotional backstory that her fellow characters do. Though some of the worst strong Black woman stereotypes are avoided here, there aren’t quite enough good points to keep Deirdre out of two-dimensional territory. And, her motivations really matter because her character on the show can also help us start a conversation about the relationship between Black and Native people in the United States today and why Black people have to name decolonization, with an emphasis on land back, while we’re fighting for abolition. We can’t have one without the other.

The two big things we do learn about Deirdre are, first, that she’s ambitious and cares about her personal image as mayor and second, that her family has been in Rutherford Falls for nearly as long as the Rutherfords. Both of these points leave plenty of room for the writers to explore the deep relationship between anti-Black racism and the colonization of Native land, but they never quite get there.

Here are the things they missed that could greatly improve our understanding of Deirdre’s position in Rutherford Falls:

My third critique ties into what I think is actually really important about Deirdre Chisenhall’s character and why she matters to how we think about Black and Native solidarity today. As of the end of Season 1, all we’ve seen is her paying attention to her personal image, which doesn’t sit quite right in this case because Black people, even when in positions of power, are well aware of their own history and dreams for the future. Perhaps the Minishonka Council are happy that Deidre keeps the non-Native weirdos in town on a leash. That’s fine. Her ambition isn’t a problem in and of itself, and her cut-throat candor is one of the most fun parts of her character. But when we see Black excellence as only climbing the ladder and achieving roles that our ancestors could never have dreamed of, we need to pay attention to when those roles place us in positions of power within a settler colonial state. If representation matters, sovereignty matters more. Abolition matters more. And, like I said before, it’s a package deal.

The Black community has embraced the concept of Black ambition, Black excellence, and rightly so. We have so much stacked against us that seeing fictional Black excellence can remind us that there are Black people in the future and that we deserve to thrive not just survive. But we as Black people cannot win by the rules of today’s state. Even if every diversity, equity, access, and inclusion committee at every business in America sticks with their 2020 commitments to anti-racism and Black people are finally able to call the shots, we will still be living on stolen land. Capitalism and racism go hand in hand. While I don’t begrudge Black people’s financial means or career success, it does not mean the work is over. We will not have truly dismantled the colonial system that brought our ancestors to this land until we return that land to the people it came from.

This past year has been full of interracial reckoning and movement toward solidarity. One conversation that I see starting to happen is where interracial solidarity lies between Black and Native people and what we as Black people need to consider about Native rights as we fight for our own liberty, and vice versa.

So, as much as I want Deidre Chisenhall to be so much more in her name-taking, pantsuit-wearing, Black woman ferocity, I also see that she is a reminder that there is solidarity work with Native folks we desperately need to do. Hopefully, NBC renews Rutherford Falls so we can see the light of that solidarity, and Deirdre in her full glory, blossom on the small screen.