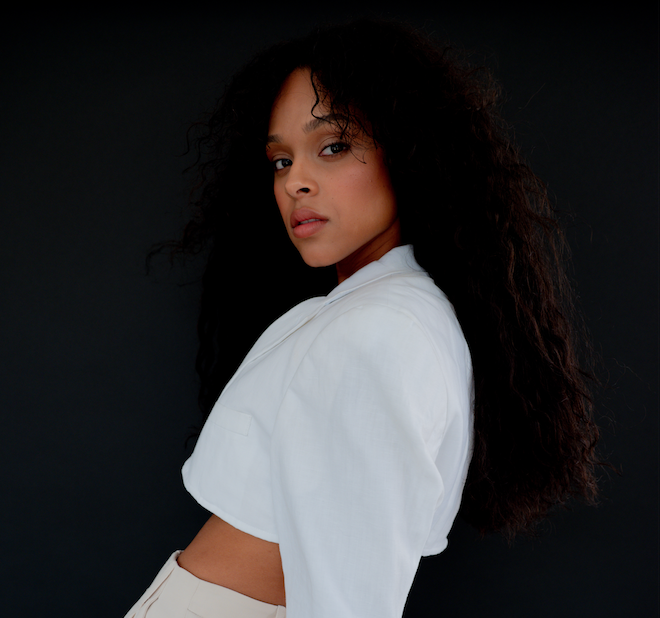 Rising actor and American Horror Story: Apocalypse alum Ash Santos lands another thriller-based role. Santos is set to play in the upcoming Netflix drama True Story. In this crime-thriller starring Kevin Hart, a famous comedian gets more than he bargained for when a night in Philadelphia turns into a threat to destroy everything he’s worked for.

With a lucky streak in landing horror roles and quickly making it in Hollywood, Santos is a rare gem. The performer recently opened up to Black Girl Nerds about her next moves, choosing roles, and what fans can expect to see in her newest drama.

How do you feel that past roles, such as playing Emily in American Horror Story: Apocalypse and Maria in Night Teeth, have shaped your career?

It’s really interesting because they fall in a similar genre. It has been a lot of fun because horror is a genre that I’ve always loved and enjoyed. American Horror Story was my first job in Hollywood. I’ll always be so grateful for that because I was such a fan of that show. Getting to have that be my first opportunity was so exciting. It really set me up in a  beneficial way. Night Teeth we shot during a pandemic. To see it all come together is always the fun part because it’s so fun to watch it in editing. I’ve been really grateful because it kind of set me up in a really unique way in a genre that I’ve always been a fan of. I just really love that.

Will you continue to act in more thriller-based content?

I’m not at a place where I get to choose what I work on — it just so happens that I keep booking these types of things. It’s a lot of fun. Last year I was lucky enough to work on an HBO pilot that unfortunately didn’t go, but it was such a fun horror-thriller. If I get to keep working on these, I’d be more than happy. It’s such a fun experience getting to be part of something that excites people when they watch it.

Can you talk about your upcoming Netflix drama True Story?

I’ve always been such a huge fan of Narcos. True Story was from the creator of Narcos [Eric Newman], and it was going to be Kevin Hart in a way that we’ve never seen him before. When I read for this, they didn’t have a script. The whole thing was done over Zoom because of the pandemic. I’ve always been such a fan of Kevin Hart. I’ve always really appreciated his hustle and how far he’s come. Being able to see his acting chops in a new, fresh way and then getting to be a part of it is really exciting to me. The show has really dark moments. The show is very much a crime thriller. I’ve seen some of it already, and I’m so impressed with how it came out.

How did you prepare for this role in True Story?

It wasn’t so much extensive preparation; it was more just getting into the headspace of who Daphne is. She is a really pivotal and integral part of the story. Her life intertwines with Kevin’s in a very interesting way. I had never played a character before who was manipulative in a way that Daphne could be manipulative, who was very cunning and knew how to get what she wanted and use every resource in order to get what she wanted. Getting in that headspace as that character was just fun. It just felt like playtime. It’s exciting when you get to play someone who is very different from who you really are. In my life, I’m Ash, I’m very straightforward. Daphne was the complete opposite of that. So I had a lot of fun being able to play her.

What can your fans expect to see in this drama?

They’re going to see me in a way that they haven’t yet seen me before. So far I have played characters who were very close or similar to who I am as a person. The comments I keep hearing from people who know me and have seen my work is, “We don’t even feel like you’re acting. We just feel like we’re watching you.” Daphne is more removed from you than I am. So I think it’s going to be fun for people to see me in a fresh new way.

With your career advancing quickly, what’s next on your plate when it comes to television?

When it comes to television, I really look up to women like Issa Rae and Phoebe Waller-Bridge. I really look up to women who are not only these fabulous performers but they also write really powerful stories — stories that are at the heartbeat of our culture right now. My ultimate goal is to be a creator as well. I’m currently in development, writing a pilot that’s based on my life. It’s been a lot of fun getting to exercise that muscle and branching out in that way. There are people who are actors, as well as producers, as well as writers. So being able to grow into that phase in the future is my ultimate goal.