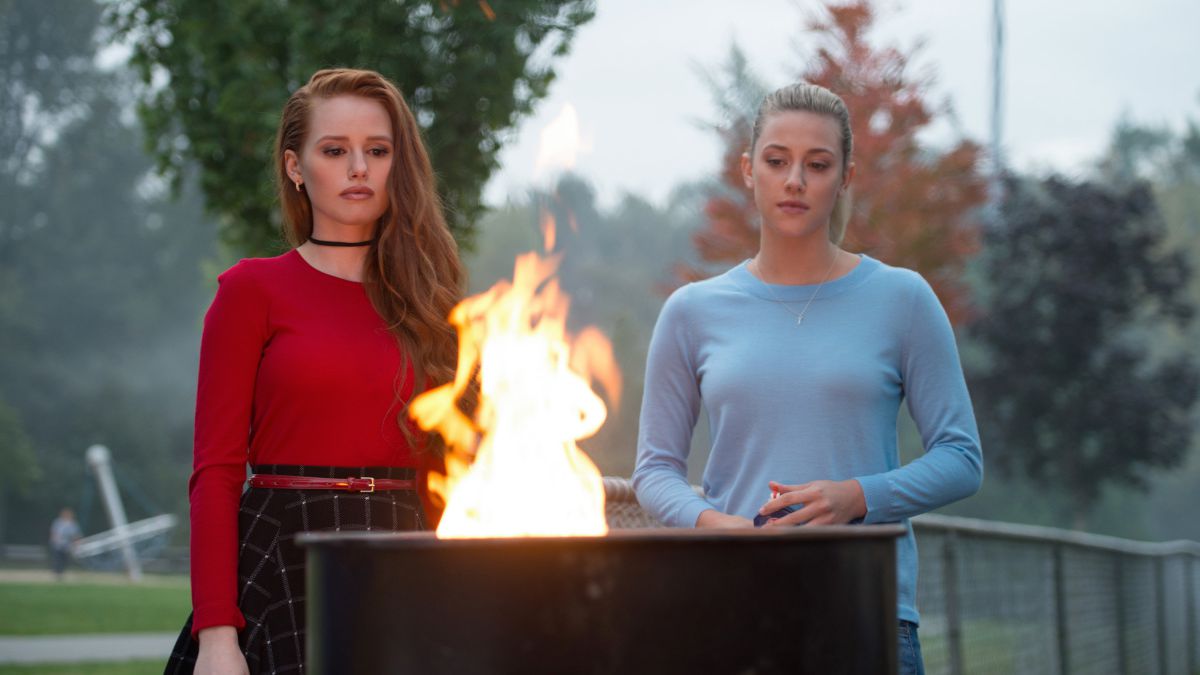 Three episodes in and Riverdale is conquering its learning curve and figuring itself out. It’s getting there much faster than many season one shows. “Body Double” is a near-perfect episode that limits the show’s weaknesses (Riverdale’s adult population) and expands on its strengths, one of them being its commitment to girls as allies rather than adversaries.

“Body Double” bridges the gap between Betty and Veronica and Cheryl, who end up on the same side versus Riverdale’s football players. Riverdale already proved it knows how boring it is to watch girls hate each other (especially over boys) and reacted by solidifying Betty and Veronica as friends, this week turning them against boys. Cheryl and Betty get the same treatment as they finally get over the hump between them: Jason.

The fact that Cheryl Blossom is a total weirdo who shouldn’t be nearly as popular as she is has already been well-established so it’s not that strange that she happily went along with Jason’s plan to fake his death. Everyone does that, you know. Though her arrest seems like it’ll threaten her status, her place at the top of the pyramid is untouched, even as her image of her brother is tarnished by confirmation that he was as awful to Polly Cooper as suspected.

The oft-mentioned Polly remains offscreen but her presence looms large in “Body Double.” She’s part of the reason why Cheryl and Betty can’t stand each other, and Alice’s parenting begins and ends with insisting Betty not be like her sister (or any “bad girls” like Cheryl, Veronica, or any other girl on the planet). And even though we have yet to meet Polly in the flesh, she makes something of an appearance via Betty who appears less and less mentally stable.

What begins as a Veronica-centric revenge quest quickly becomes Betty’s as she replaces Veronica as the more aggressively confident one. Veronica’s intimidated by the unrepentant Chuck Clayton so it’s up to Betty to prod her bestie into battle. She’s out for blood, determined to make someone pay for what happened to Polly (which is still very murky). So she dons a black wig, puts on Polly’s lipstick, and threatens Chuck with death by hot tub.

Despite the dark connotations (how does one boil in a hot tub?), there’s no expectation Betty will follow through on her threat — that would be dark. But it’s just enough of a hint to keep us wondering how far Betty was willing to go, and it’s both fascinating and impressive to watch Bad Betty slink around seductively. Even Veronica, whose eyes grow three sizes, is both horrified and dazzled (and, in an alternate universe, aroused) by Betty’s new persona, who refers to Chuck as Jason and herself as Polly (Cheryl is not the only one with an odd sibling relationship). I praise Lili Reinhart every week, but she continues to ride the waves of Betty’s character with ease, and she owns Betty’s visit to the dark side. As fun as it is, we’re still left with the question of what else Betty may do–or has already done–as Polly, especially when, as we later learn, she has no memory of it.

Oddly separate from all this is Archie. I question why he’s so unconcerned with Betty and Veronica’s war on his teammates, but he probably would have just been in the way. His detached story works mostly to his benefit, and a lot of that has to do with Riverdale finally utilizing Josie Mccoy. Unlike the rest of Archie’s relationships, his with Josie isn’t weighed down by drama (I’m sure that will come later) so it’s a momentary reprieve from Archie’s brooding. Instead, we get a smiling, wildly endearing Archie, plain in his admiration of the Pussycats. His arguments with his dad may be rote, and somehow this all comes back to Grundy, but it’s a good look for Archie. And now that things have thawed between him and Josie, there’s potential for her to be more easily integrated into the main storyline (I’m totally shipping it, if you didn’t notice), and Riverdale needs her.

Despite its successes in other areas, the show still fails in the one that would make it a real winner in 2017: embracing the social and political, all the more necessary when we’re looking at four years of President Trump.

Riverdale is smart enough to build an episode around attacking slut-shaming but too ignorant to consider the implications behind the only black guy in Riverdale being predatory toward a bunch of white girls and a light-skinned Latina. It included Archie Comics’ first gay character, but shies away from an asexual Jughead and sees a liplock between Betty and Veronica as a joke rather than something that could be romantic. Riverdale’s comfortable mentioning racist hate mail Josie’s mom received, but has a cast that’s almost entirely lily white (Camila Mendes and Marisol Nichols are Latina, but the most acknowledgement we get of that is Hermione’s “mija”).

“Body Double” is proof of how well the show can balance its murder mystery, characters, and even a statement about female sexuality, all the while still working in shots of a scantily clad actors (very important). The potential is there, and if Riverdale wants to, it can live up to it. But only if it wants to.