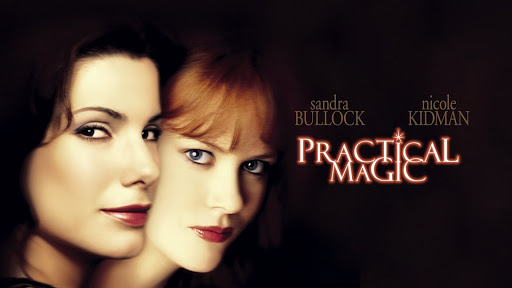 From blood moons to self-stirring spoons and long luscious locks, the Owens women are a magical brood. Practical Magic sets the stage for everyone’s favorite family of witches with jilted Maria Owens and her broken-heart curse. Love-meddlers and all-around awesome Aunts Jet (Dianne Wiest) and Frances (Stockard Channing) are the subsequent foundational ingredients in this captivating cauldron. Then come sisters Sally (Sandra Bullock) and Gillian (Nicole Kidman) as the next bewitching elements in this visual spell, while their bonds of sisterhood are tested through death, grief, domestic violence, and murder. Practical Magic turns 20 this year, and after all this time and perspective has gone by, its enchantment still holds strong.

“Can love travel back in time and heal a broken heart?” Sally muses on one of the key themes of Practical Magic. The legacies of inherited and intergenerational trauma in the Owens family is intense and disturbing. Their sisterhood bonds are strong, but constantly being tested by a world that enjoys marginalizing and punishing strong women. Maria’s curse that any man who dare love an Owens woman will die after the appearance of the deathwatch beetle only adds fuel to the collective family trauma. Ultimately it is the power of love that ends up breaking the cycle of tragedy, even though love has been the bane of the Owens women since Maria survived the hangman’s noose.

Practical Magic is at the top of a very short list of authentic portrayals of witches. The Owenses are healers, herbalists, empaths, and intuitive, busting the stereotype that witches are Satanists and devil-worshippers. “There’s no devil in the Craft,” Sally tells Detective Hallett (Aiden Quinn), and it’s something I find myself having to remind people over and over again, especially since this dangerous stereotype persists in new narratives like American Horror Story: Apocalypse and The Chilling Adventures of Sabrina.

Even though they are marginalized outsiders in their small town, the Owens women do their part to normalize witchcraft. “There’s a little witch in all of us,” Aunt Jet lovingly tells one of the friendlier townswomen. While I don’t 100% agree with the sentiment — not everyone has the empathy and intuition required for being a witch — I appreciate this attempt to destigmatize the image of witches. If I could cast a spell, it would be that all other visual media start following suit. Twenty years later and Practical Magic is still a unique gem in this regard.

But sadly, Practical Magic is not without some faults, and especially when it comes to representation and inclusivity. There are only two Black women in the entire film, and one Black child. These actors are the only POC in the film and are literally placed at the margins of the screen where they are often cut in half by the camera angles. Ugh.

In spite of having a majority-women cast, Practical Magic does not pass the Bechdel Test for most of the movie. It’s shocking to realize these badass, and fiercely powerful, independent women mainly talk about men. This is quite a stain on the film’s legacy.

I spoke with long-time Practical Magic fan and journalist Nadra Nittle, who reminded me of the Madonna/Whore dichotomy displayed in monastic Sally and wild Gilly: “Seeing it again after a number of years, I didn’t appreciate that their characters, in some ways, represented these two sexist female tropes. I think we can and should complicate female characters beyond these stereotypes.”

We also have yet another painful example of white women as a protected class. Sally and Gillian kill a man, twice. Yes, it was self-defense, and even more reason they should have reported the crime to the authorities. They don’t, and neither of them is held accountable by the law even when it comes knocking on their door. Detective Hallett goes so far as to commit felony perjury and stage a body so that Sally wouldn’t go to jail. This kind of kid-glove treatment of white women by law enforcement that is still in effect today, but at least now we have platforms where we can call it out. If we race-flipped Practical Magic this would be an entirely different horror story altogether.

Anywhere else these issues would be disqualifying. But not for me with Practical Magic. I’m under its irrevocable spell. Even if I could break it, I wouldn’t want to.

I wasn’t surprised that other fans of color feel the same. When I asked them why they keep returning to this movie the answer was unanimous. We love Practical Magic because of the lasting power of its core bewitchment: Sisterhood. Sisterhood is power. And women helping other women is the strongest magic of them all. To this, 50+1 Strategies’ creative director Candice Dayoan adds, “I love that their magical powers are not the main plot, but a device that moves the plot along.” This is another facet of Practical Magic that distinguishes it from other magical narratives like Harry Potter. And speaking of Harry Potter, Jimmy Angelov’s ring looks suspiciously like the Death Eaters’ Dark Mark. Methinks there is a Practical Magic fan among Hogwarts’ production design team.

Nittle also stands by the film saying, “As a woman of color in these trying political times, I’ve become increasingly interested in how women can use magic for self-empowerment, to take control of their lives. And Sally and Gillian use their power to get rid of an abusive creep and better theirs. It’s a fitting message even today.”

Alan Silvestri’s whimsical and tragic score to the now-iconic soundtrack featuring the White Witch herself, Stevie Nicks, only make this production more entrancing for its true love spells, and cactus-shaped pancakes flipped in the air.

I read Alice Hoffman’s novel several years after I’d memorized the film and it broke my heart. The book is as dark and depressing as the movie is light and hopeful. I’ve never in my life been so grateful that an adaptation strayed so far from its source material. Practical Magic isn’t just a movie. It’s a gift. Every time I watch this movie I’m enveloped in a comforting feeling of timelessness, and a kind of suspended animation. It’s what I imagine flying feels like. The aunts don’t age in the story. And neither do the sisters over these past 20 years they’ve been like my extended family. I have aged, though. And Practical Magic reminds me of how far I’ve come in my own healing from my own intergenerational and other trauma. In spite of its faults, this film has been an important anchor often when I had nothing else to hold on to. That will never change.

Here’s to the next 20 years of Owens women jumping from their rooftop on Hallowe’en, lighting candles with just their breath, and of course Midnight Margaritas. Cheers, witches.

The Cast of ‘The Unforgivable’ Discuss the Human Nature of Redemption