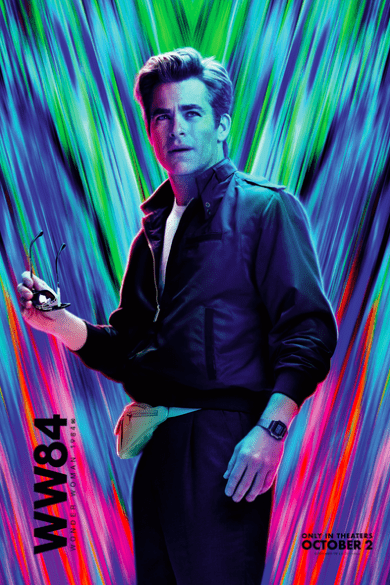 This past summer, this lucky BGN writer had the pleasure of seeing the dreamy and oh-so-loveable Chris Fine — oops, I mean Chris Pine, in London. Chris Pine informs us that he will indeed be returning as Steve Trevor in the new Wonder Woman 1984 film, co-starring Gal Gadot. BGN had a chance to meet and interview the hottie with a body (as seen in the first film) and to ask him a few questions about the movie and his feelings about it.

This film will have the same cultural impact as the first film, but with a slight spin. This one takes place in 1984.

BGN: So, in the first movie we got to see Diana do some fish-out-of-water humor. Will we get to see Steve doing some of that in this movie?

Chris Pine: Yeah. That was definitely one of the highlights comedically in the first one. Straight man/funny man is flipped. What you see in Steve this time, which is a bit fun, is less the jaded realist that’s seen the worst sides of humanity than a playfulness and a boyishness. There’s an earnestness to this wide-eyed, glorious taking in of this world that he could never imagine, which is, for a man, interesting to play. Heroes are usually meant to be furrow-browed and that whole thing. And that’s not Steve’s whole thing in this at all.

BGN: Were there any parts of the 1980s you enjoyed revisiting?

Chris Pine: Filmmaking is always like walking into Disneyland. The amount of collaborative artists that have to get together to make something work is extraordinary. For production design, it’s all the same cast of characters back behind the scenes, doing extraordinary stuff. We shot this mall thing D.C. There’s a record store, which sounds crazy but that’s archaic. The music, the fashion, all of it — it’s exciting. It’s a visual, aural feast. It’s what I really love about that TV show, The Americans. It’s awesome.

BGN: I know we cannot find out exactly how he comes back or details about it, but what was your reaction when you found out how it all worked?

Chris Pine: Patty [Jenkins] told me this idea, it must have been halfway into the first film. She was kicking it around, but once Patty lands on an idea it seems like it is fully formed and she knows everything about it. Patty is a cinephile and a lover of all things storytelling. Just like she did with Superman, there’s nods to filmmakers from the past. She’s a lover of classical Hollywood storytelling. There’s something huge and grand and old romance about it. We were just talking about it, actually. There’s action [in the movie] that’s less about the hugeness of what you can do with special effects. Rather, [it’s more about] making special effects work for the realism of the film. Films have just gone pretty insane with computer graphics, and she wants to tone it down.

BGN: Is Patty wanting to do a more realistic portrayal of athleticism?

Chris Pine: Yes. For instance, she hires actual Cirque de Soleil and actual Olympians to perform the stuff. She and I are, I find, on a similar wavelength. Because the [viewer’s] eye is now inured to cataclysmic computer graphic explosion nonsense, it’s going to be wide-eyed revelation to see things actually happen on a screen [with a] camera [that] will be just as spectacular.

BGN: Can you talk about what your dynamic with Wonder Woman was like in this movie that may be different than the last movie? Or is it the same?

Chris Pine: The first one was a lot about falling in love. You have that wonderful, “will they/won’t they?” So much about their personalities don’t fit, but they do, dammit, and you want them to be a thing. The consummation has already happened, so now it’s an exploration of that missing, that longing. There’s the strength of that bond.

BGN: The first movie was Patty Jenkins’s first blockbuster. In her making the second movie, do you see any difference in her working style?

Chris Pine: I’ve never met someone more self-assured and knowledge about what she wants, how she’s going to do it, and why she’s doing it. She’s a machine — just a glorious machine. Samurai sword is a good analogy.

The relationship between Wonder Woman and Steve Trevor is the backdrop that powers and galvanizes this film, so it just would not be the same without our blue-eyed prince. In this film, we can expect both Diana Prince and Steven Trevor to light up the stage with their amazing and grand personalities. Their story will take center stage and will have all of us asking, “How did he come back, and what does this mean for their love connection?” Find out the answers in theaters October 2nd.